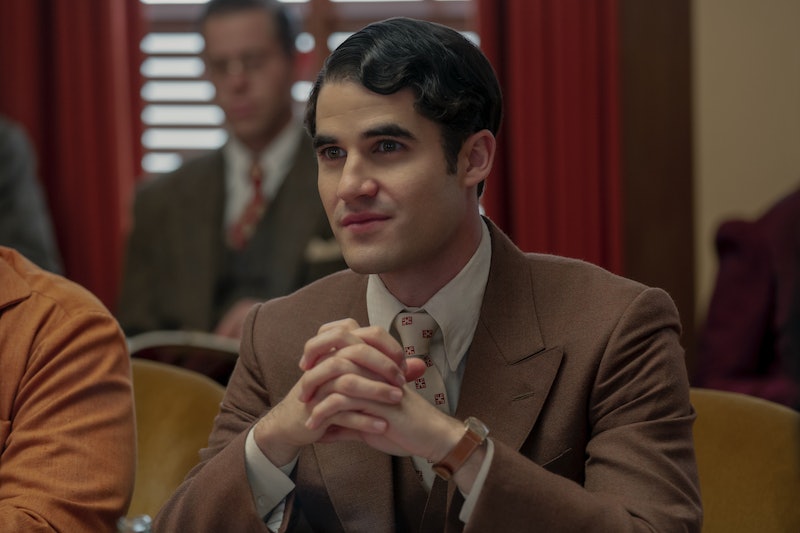 Saeed Adyani/Netflix
By Brad Witter
May 1, 2020

Though several of the characters in Ryan Murphy's new Netflix show, Hollywood, are based on real people, Darren Criss' Raymond isn't one of them. The actor did, however, help plant the seeds for the show. While out celebrating the awards season success of FX's The Assassination of Gianni Versace: American Crime Story, Criss proposed to Murphy that he should next tackle the era of 1940s Hollywood. "One thing I told Darren that night was that after Versace, I was interested in doing something much more inspirational and with a happy ending," Murphy recently explained to The Hollywood Reporter. "I really didn't want to see somebody blow their head off with a shotgun again."

So, he plotted out Hollywood's story with co-creator Ian Brennan, and they developed Criss' character: an up-and-coming director who also happens to be half-Asian. Raymond's race adds to the series' examination of identity, particularly as it relates to his ability to pass as white. His actor girlfriend Camille (Laura Harrier), a black woman, doesn't have the same privilege, but Raymond uses his position to help forge a space for her — and ultimately, to reenvision a more diverse, inclusive version of Golden Age Hollywood.

"There's a blinking red light on [the show] that says, 'Ryan Murphy, Ryan Murphy,'" Criss told THR in a separate interview. "It's sexy, it's fun, it's glamorous, it's dangerous, and it has resonance now."

Murphy told THR that he considered doing a Biography-style anthology series devoted to each of the characters in the show who are based on real people, such as film actor Rock Hudson (Jake Picking), Oscar winner Hattie McDaniel (Queen Latifah), and the first Chinese-American movie star, Anna May Wong (Michelle Krusiec). But eventually, the story evolved into something else: not a retelling, but a blissful reimagining of a past in which marginalized people got a seat at the table much sooner.