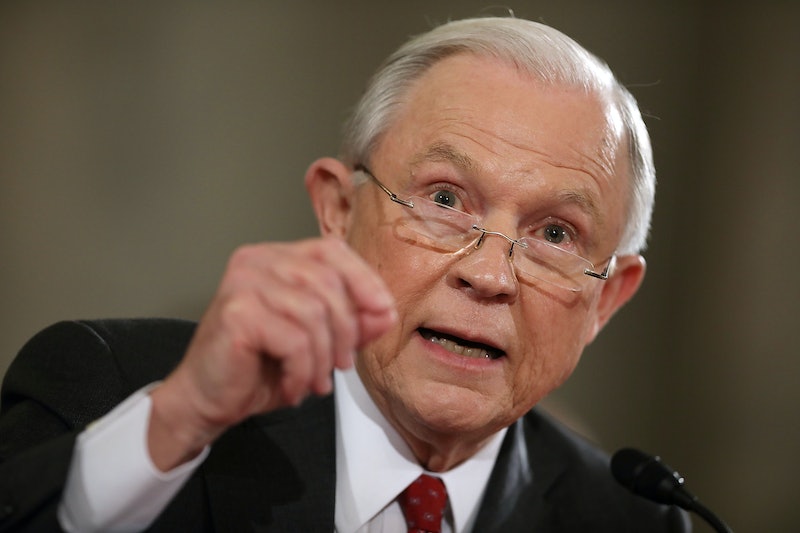 During last night's hearing on the upcoming confirmation vote to approve Sen. Jeff Sessions as Attorney General, the Senate did something not seen in the Upper Chamber for many decades. While Sen. Elizabeth Warren tried to read a letter from the late Coretta Scott King, Majority Leader Mitch McConnell invoked Rule XIX, and called for a formal vote to silence her for the rest of the hearing. On a strictly partisan-line, Republicans successfully did just that. So if you find yourself opposed to this refusal to let King's words be heard, a great way to protest Sessions would be to call your senator and read part of the letter to them.

The controversy surrounding Sessions is nothing new. Back in 1986, he was nominated by President Reagan for a federal judgeship, but hit rocky waters when facing Senate confirmation. In fact, that's where the original letter from King originated: she wrote to Sen. Strom Thurmond, asking that he and his colleagues reject Sessions, due to what she said were efforts to restrict the voting for black residents of Alabama. Testimony also came from a former coworker who claimed Sessions had called him "boy" on several occasions, and joked about liking the KKK until he found out they smoked marijuana. Sessions has maintained that he is not racist, and that his comments were taken out of context.

The move by McConnell to silence Warren is genuinely difficult to fathom. The King letter was entered as evidence and read aloud in 1986, without problem or objection, by then-Sen. Ted Kennedy. So, there's that. But there's also the fact that Coretta Scott King, and of course the King family altogether, are legitimate heroes to many (and perhaps even a majority) of Americans. Appearing intent on stifling the voice of an American icon seems like a tactical mistake, to say nothing of the moral quandary involved.

Additionally, there's the obscurity of Rule XIX, which has yet to yield a single historic incidence of its use since its inception, back in 1902. There have been threats of invocation, but no formal action or vote like the one taken last night.

So contacting your two senators seems warranted on several levels. By reading the letter aloud, you'll not only be protesting its omission from Sessions' hearing and his confirmation as a whole, but also the seemingly unprecedented attempt to silence both the words of Coretta Scotta King and Sen. Warren herself.