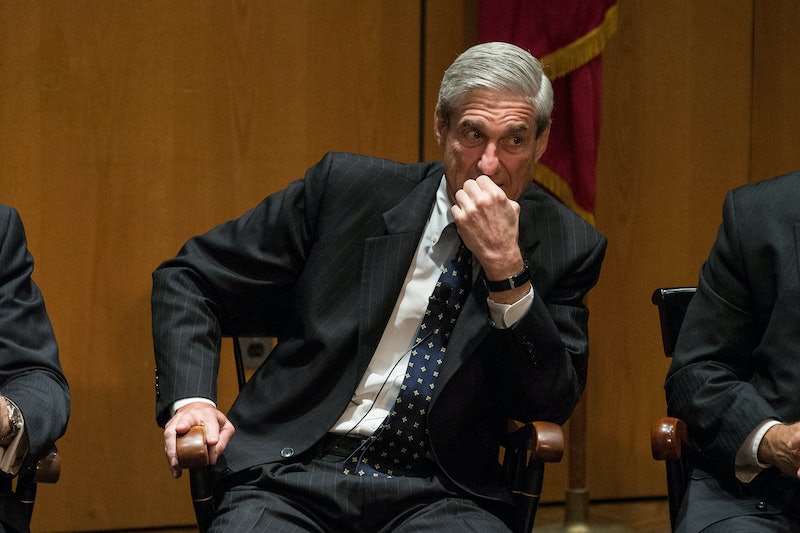 After almost two years, Robert Mueller's report on his investigation into whether President Trump's 2016 campaign coordinated with Russia has finally been released. Although parts of it have been redacted, you can now read the full Mueller report online.

Mueller ended his probe in March, and Attorney General William Barr released a summary of the investigation's conclusions. But although the investigation has led to dozens of indictments and countless speculation about what it might mean for Trump, the contents of Mueller's report itself have remained under seal — until now. (Read the report here.)

The report, which Barr released to both Congress and the public on Thursday morning, is nearly 448 pages long. In the report, Mueller and his team wrote that they were not able to conclude that "no criminal conduct occurred," per CNN.

"The evidence we obtained about the President's actions and intent presents difficult issues that prevent us from conclusively determining that no criminal conduct occurred," Mueller's team wrote. "Accordingly, while this report does not conclude that the President committed a crime, it also does not exonerate him."

Mueller's team also wrote that while their investigation found no evidence that Trump campaign officials "conspired or coordinated with the Russian government in the election interference activities," they nonetheless expected that Trump's campaign "would benefit electorally from information stolen and released through Russian efforts." These efforts, according to the report, were twofold: a social media campaign favoring Trump over Hillary Clinton orchestrated by a Russian entity, and the release of stolen documents from the Clinton campaign that were obtained by a Russian intelligence service.

According to the report, Mueller's team believed that it could subpoena Trump but decided against doing so out of concern that it would cause a "substantial delay" in the investigation. However, the Mueller report did detail Trump's initial reaction to the news that a special counsel had been appointed to investigate possible collusion between his campaign and Russian officials.

"Oh my God," Trump said, per the Mueller report. "This is terrible. This is the end of my presidency. I'm f*cked."

Trump went on to suggest that presidencies are ruined by the appointment of special counsels, and he accused then-Attorney General Jeff Sessions of letting him down.

"How could you let this happen, Jeff?" Trump asked Sessions, as the Mueller report detailed.

The report did clarify, however, that the investigation actually applied "the framework of conspiracy law, not the concept of 'collusion,'" due to the fact that collusion is not considered a specific offense under the United States Code.

As NPR pointed out, Barr released a version of Mueller's report that contained some redactions, but Democratic lawmakers are demanding to see the complete report without any redacted content. During his Thursday morning press conference, Barr said that content pertaining to four categories of information were redacted within the report.

These categories are color-coded throughout the document: white for "harm to ongoing matter," such as current criminal cases; green for "personal privacy"; yellow for "investigative technique"; and red for "grand jury." Democrats have argued, however, that sensitive information from prior investigations has been transmitted to Congress, and that the Justice Department should do so again with Mueller's complete report, per NPR.

In between redactions, the Mueller report indicated that the special counsel's investigation could not conclusively clear Trump of criminal conduct or obstruction of justice. For example, on June 19, 2017, Mueller's team wrote that Trump met with his former campaign aide Corey Lewandowski and asked him to deliver a message urging Sessions to publicly announce that the president had done nothing wrong, despite the fact that Sessions had recused himself from the investigation.

According to the report, the message was never delivered, because both Lewandowski and senior White House official Rick Dearborn — to whom Lewandowski delegated the task — were unwilling to do so. This was one of 10 episodes illustrating Trump's potential obstruction of justice during the investigation, The Daily Beast reported. Although the special counsel's team could not clear the president of criminal conduct, they could not charge him with anything, either.

"The investigation found numerous links between individuals with ties to the Russian government and ties to the Trump Campaign," Mueller's team wrote in the report, but "the evidence was not sufficient to support criminal charges."

Minutes after Barr's press conference Thursday morning, House Judiciary Committee Jerry Nadler called on Mueller to testify before Congress, echoing a similar call from House Speaker Nancy Pelosi and Senate Minority Leader Chuck Schumer earlier in the day. Although Barr has released the redacted version of Mueller's report to lawmakers and the public, Democrats have urged Mueller to testify in order to "restore public trust."