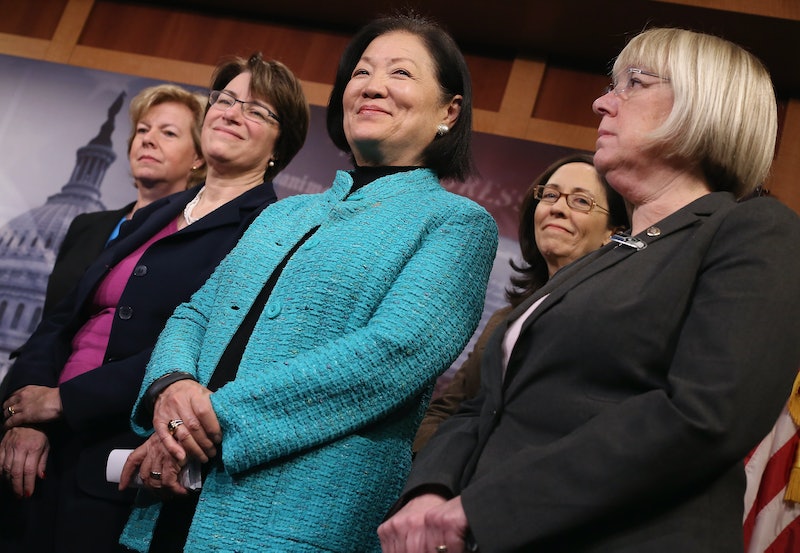 The Senate is usually considered the better behaved of Congress' two chambers. But in the case of recently passed House legislation amending rules for workplace harassment on Capitol Hill, the Senate has yet to take up a vote. It's a rare situation that's led all 22 female senators to send a letter about harassment to the upper chamber's leadership (read: Sens. Mitch McConnell and Chuck Schumer), asking for a vote to be called ASAP.

The House passed its legislation as a response to the Me Too movement, after an outbreak of allegations of sexual harassment or misconduct ended or curbed the careers of dozens of high-profile men (and one woman). The lower chamber passed its version of the bill back on Feb. 6.

That bill made substantial changes to how harassment claims against congresspeople and their staff would be handled going forward. Under a 1995 law, such claims require the victim to undergo mandatory counseling and mediation with the accused. Settlements are also paid out of a little-known Treasury fund, rather than by the person against whom the allegations are brought.

The House's bill — as well as the one female senators hope to get a vote on in their chamber — will do away with the mandated counseling and mediation. It will also bar members of Congress and their various staff employees from using Treasury funds or their personal office funds to pay settlements on sexual harassment claims.

Other changes include increasing transparency by releasing a report every six months detailing the claims that have been filed. In addition, the bill makes sexual harassment training mandatory for all congressional members and their staff.

The House's version was spearheaded by Rep. Jackie Speier, who shared her own story of sexual harassment as a young congressional staffer. In the Senate, the quest to get going on a vote has been led by Sens. Kirsten Gillibrand, Amy Klobuchar, and Patty Murray.

Another aspect of contention between the House and Senate versions of the bill concerns legal protections for victims who come forward with sexual harassment claims. The House's bill establishes an Office of Employee Advocacy to specifically defend and support the alleged victim. But the Senate's version does not, which the female senators describe as "an inequity" between the two chambers in their recent letter pushing for a vote on the legislation.

Currently, there are six members of Congress who had allegations of sexual harassment or misconduct be made public as a result of the Me Too movement. As a result, several were compelled to resign.

Clearly, reform on the handling of sexual harassment complaints is needed in Congress. And that's prompted all 22 female senators to sign the letter below, urging a vote on proposed legislation to hold Capitol Hill accountable for sexual harassment accusations. Sen. Murray's office provided Bustle with the full letter. It reads:

We write to express our deep disappointment that the Senate has failed to enact meaningful reforms to the Congressional Accountability Act of 1995. We urge you to bring before the full Senate legislation that would update and strengthen the procedures available to survivors of sexual harassment and discrimination in congressional workplaces.

Although the Congressional Accountability Act (CAA) implemented meaningful reforms when it became law in 1995, it continues to require survivors to endure an antiquated dispute resolution process, including a month-long counseling session, forced mediation and a 30-day “cooling off” period before a victim can make a decision whether to pursue justice in a courtroom or continue with administrative procedures. The time has come to rewrite the CAA to provide a more equitable process that supports survivors of harassment and discrimination.

The Senate’s inaction stands in stark contrast to the bipartisan effort in the House of Representatives that led to the passage of bipartisan CAA reform legislation in February. The House bill includes a number of important provisions, such as eliminating waiting periods before a victim can take their case to court, increased transparency for awards and settlements, and a requirement that Members of the Senate and House pay for an award or settlement stemming from a case of sexual harassment or discrimination that they personally commit.

When the Senate considers CAA reform legislation, we will also have the ability to address an inequity that now exists between House and Senate staff. The House of Representatives passed H. Res. 724 that provides House staff who are survivors of harassment or discrimination access to free legal representation. Senate staff who face similar harassment or discrimination must pay personally for legal representation or represent themselves through complicated legal proceedings. Therefore, the Senate must act quickly to provide Senate staff with the same resources as their House colleagues.

Inaction is unacceptable when a survey shows that four out of 10 women congressional staffers believe that sexual harassment is a problem on Capitol Hill and one out of six women in the same survey responded that they have been the survivors of sexual harassment. Survivors who have bravely come forward to share their stories have brought to light just how widespread harassment and discrimination continue to be throughout Capitol Hill. No longer can we allow the perpetrators of these crimes to hide behind a 23-year-old law. It’s time to rewrite the Congressional Accountability Act and update the process through which survivors seek justice.

The female senators hope their efforts will encourage Schumer and McConnell to call a vote on this important legislation. They say if the House can do it, there's no excuse for the Senate to keep stalling.