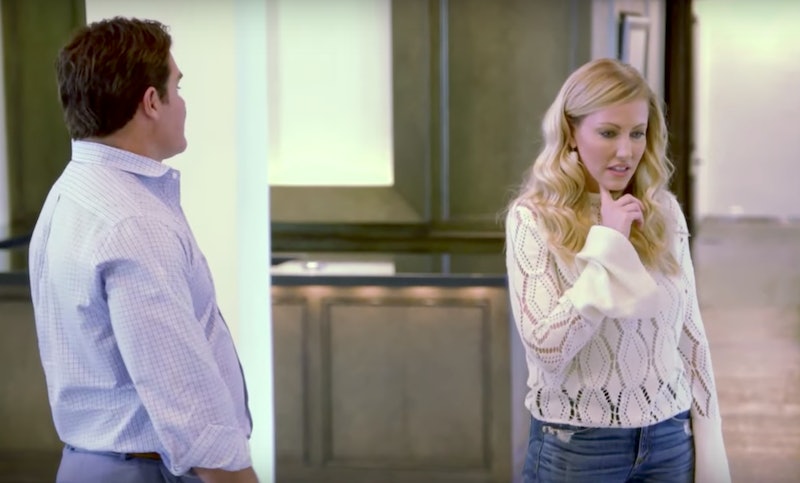 On Monday’s episode of The Real Housewives of Dallas, viewers watched Stephanie and Travis Hollman purchase a multimillion-dollar mansion complete with a toilet that also works as a "massage chair," a shower head that's attached to a skylight, and a chandelier that took two years to construct. However, out of every luxe thing the home had to offer, no feature stole the show quite like the indoor swimming pool smack dab in the middle of the foyer. And now, as Stephanie and Travis revealed on Twitter on Thursday, the living room pool of RHOD is no more. Go ahead and let that news sink in/wash over you/whatever water-themed metaphor feels right.

After taking a tour of the manor, Stephanie made it clear that she was not totally on board with the idea of the living room pool. Travis believed in the house regardless, so he bought the place. And so, the Real Housewife of Dallas, her husband, their two young sons, and their dogs would soon move into a dwelling where they’d have to change into their bathing costumes the moment they walked through the front door.

OK, yes, that’s an exaggeration; there was plenty of walkable floor around the perimeter of the pool. But still. It was a giant body of water in their living space. It sure looked cool and would be an impressive showpiece at any house party (and a hilarious obstacle as the house party went deep into the night), but it’s probably not an ideal situation when you have little kids running around.

But Stephanie won't have to worry about any of that. She won the living room pool battle; the foyer is on its way to becoming a much drier space. (And as for her battle with ex-best friend Brandi Redmond? Well, that's another story.)

The iconic living room pool is filled in and boarded up. Never to be swam in again.

Raise a glass of chlorinated water to this fallen reality TV hero.