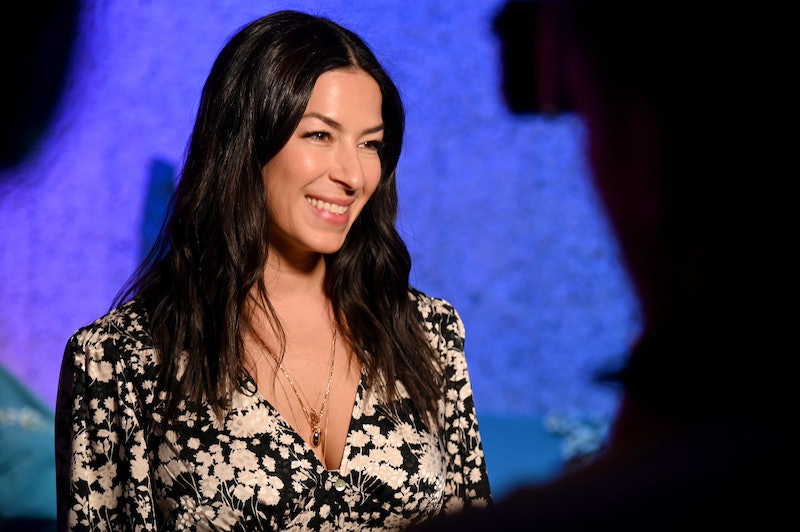 When Rebecca Minkoff decides on a theme, she sticks to it. Her Spring 2020 ready-to-wear collection, which debuted at New York Fashion Week, was built around the concept of “rebirth.” It’s a fitting motif considering her eponymous label is experiencing a “rebirth” of its own: She’s expanding into children’s clothing and fragrances this year.

Minkoff’s NYFW presentation — which marked her 15th year in the industry — felt like an ode to springtime and newness. It was set against a vibrant backdrop of bright florals, sunny swing sets, and young children coordinating with their stylish mothers.

“With each collection’s theme, I try to capture the mindset my customer is in,” Minkoff tells Bustle. “January and February are always about starting new and fresh. Spring is coming.”

With this particular collection, she wanted to emphasize the importance of celebrating “all forms of rebirth.”

“It’s whatever that means to you,” Minkoff explains. “Health, wellness, a child, a new situation in your life. I’m really speaking to that as much as I can through the collection.”

Now that she’s stepping into childrenswear, Minkoff can pull from her own experiences as a mother to create apparel for children that’s stylish but also functional.

“I’m always thinking how active my children are and how they ruin their clothing,” she shares. “For me, it was making clothing that wasn’t too overly fussy or overly styled — clothing that they could be themselves in and not have to worry about their parents being like, ‘Don’t do that. You’ll rip it.’”

While she wanted to avoid matching looks that could be categorized as “twinning” ensembles, she still worked to tie womenswear and childrenswear together. “You don’t have the twinning situation like it’s ‘mommy and me,’ but you have a reference back to your mom, and you can still match to some degree,” Minkoff explains.

In a move that was “100% intentional,” at her NYFW presentation, the designer featured a breastfeeding model. The casting served as a nod to her own experiences as a mom, but also as a way of amplifying representation for mothers who don’t typically see themselves centered in these types of spaces.

And while babies can be unpredictable, especially when they’re being stared at by hundreds of strangers, the production went off without a hitch.

“Somehow that baby stayed on her boob for two hours,” Minkoff says. “I don’t know how. I said, ‘I don’t know what’s in your milk, but I applaud you.’ For me, as a mother, [breastfeeding] is a huge part of my life. I just want that to be normal. I feel like I have to keep putting it in front of people’s faces until it is.”

Being a mother has changed Minkoff’s approach to her business in several ways, including her commitment to leaving a more sustainable world for children to inherit.

With the conversation around sustainability in fashion still taking shape, Minkoff cautions against making blanket statements about what the term means. Instead, she’s championing consumer education above all else.

She says her immediate goal is to reduce waste: For her new kids’ line, when you order an item, that’s when the garment is made, so no extra inventory goes into a landfill. Ultimately, she plans to move to a similar production model for her womenswear line, too.

“I’m not saying we’re perfect,” she says. “You’re gonna order Rebecca Minkoff, and you’re going to get it shipped in a plastic bag. That’s still not OK with me, but I’m working on it. [I want to] make sure we clean up the supply chain as fast as possible.”

Her fragrance business, debuting in October, will also adopt a sustainable model. “I want nothing in there that’s toxic for me and my children,” she says. “We are going to use plastic that’s recyclable, and the paper is FSC-certified. I’m really proud of it.”

As Minkoff’s business evolves, she also wants to take other women leaders under her wing. This season, she partnered with TRESemmé for the brand’s #WomenLeadTheWay pledge, which works to help advance women into more leadership positions in the workplace. She opened up about how mentorship has played a role in her own career, explaining that “some misnomers” exist when it comes to the mentor/mentee dynamic.

She also emphasized the significance of accessing a network of like-minded individuals. “My success is very much linked to six degrees of separation,” she shares. “I had a woman who introduced me to lots of people, and from there other people introduced me to lots of people. It’s not being afraid to ask — and asking for those right connections — that can be very pivotal.”

Ultimately, Minkoff hopes to provide more opportunities for women — and to dress them for it. “My goal after 15 years is to design products that celebrate those milestone moments,” she says. “It’s an outfit to give her that little boost of like, ‘I look good. I’m gonna go ask for my raise, I’m gonna quit, or I’m going to find a better man.’ Whatever it is.”