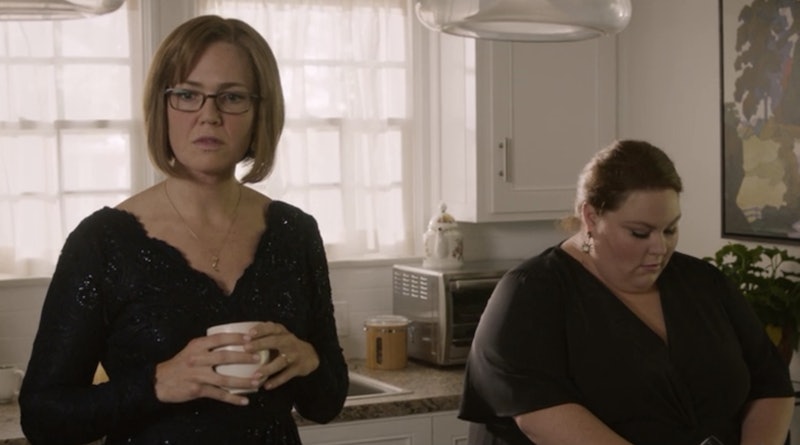 I've lost track of how many times a "well-meaning" relative has remarked upon my weight with wide, sullen eyes and a fearful tone. "I love you no matter what size you are," they'll begin. "But I'm worried about your health." "Why are you actively shortening your life?" another might ask. "Think of your kids. They don't want to lose you." These comments are not unlike Rebecca's concerns about Kate's weight on This Is Us. In the second episode of Season 3, Rebecca learns that her daughter is undergoing in vitro fertilization (IVF). The moment Kate's hormone injection falls out of the fridge, Rebecca is noticeably disturbed.

"Just say it," Kate later urges her. Although Rebecca is initially hesitant to answer, she eventually does: "Kate, have you guys really considered all of the risks?"

"Oh, can we not do this?" Toby interjects, but it's a little too late.

"I did learn a lot from helping my friend Carol," Rebecca continues. "And I know that the egg retrieval surgery is a dangerous procedure for someone... someone your size, Kate." A couple of scenes later, Rebecca pulls up a link on her phone. "OK, no, here it is, I found it," she says. "So, 'Doctors will not even perform IVF on women over a certain weight in Australia.' Because it's that dangerous."

Like Kate, I've been presented with these links. Links about the obesity "epidemic." Links about the risks of being plus size and pregnant when I was expecting both of my daughters. Links that suggested I should, somehow, make sure I not gain a single pound in the third trimester, lest I want to risk hurting my children. Links about the best foods for weight loss. Links filled with statistics about heart disease and insulin resistance and myriad "preventable" conditions that I am opening myself up to because I am fat.

Although delivered under the veil of concern, rather than overt bullying, these types of comments about fatness are among the most frustrating I receive. The look on Kate and Toby's faces when asked whether they've "really" considered the dangers of IVF suggests that they might agree.

The thing is, I'd wager that there are very few comments about "obesity" and health that fat people haven't already heard. There are very few supposed "risks" we haven't been bombarded with by our doctors, our teachers, our parents. Oftentimes, there's very little research into weight and health that we haven't done ourselves — because this stuff is inescapable. We aren't allowed to simply live, and Rebecca's comments to Kate are a reminder of just that.

In the same episode of This Is Us, Miguel fills Kevin in on the events that have transpired between his wife and stepdaughter. "Your mother knows everything there is to know about IVF because of Eloise and Plaza," he tells him, referencing his and Rebecca's acquaintances who were born thanks to the procedure.

I've heard derivatives of this, too. After someone spends a few days roaming through a chunk of the 70 million Google search results for "risks of obesity," they'll present me with a list of "facts," delivered with utmost certainty. They will be sure that they are being helpful with their newfound education.

Kate is being reminded that, culturally, her body is perceived as a barrier, a problem, and a flaw.

Kate's narrative is incredibly successful in that, if you are fat yourself, you will very likely relate to much of what she experiences. In this episode, for example, Kate is on trial. She is asked to justify her choices, to prove that she has done the research, and to defend her body and its capabilities. Even though the exact words are never said, she is essentially being told that she is killing herself (or, that something she is choosing can kill her). She is being reminded that, culturally, her body is perceived as a barrier, a problem, and a flaw.

Most fat people are on trial every day of our lives, too. Whether we eat "healthy" foods or "unhealthy" foods, our size is routinely cause for concern, if not blatant tormenting. Whether we work out or not, we will still be sent links about the importance of exercise. Whether we have low cholesterol and average blood pressure or we are struggling with illness, we will probably be interrogated in the same way Rebecca interrogates Kate, or far worse.

"I'm just saying, why would you take that risk when there are so many other options out there?" Rebecca asks her daughter.

"Kate, of course a baby would be cause for celebration. But...

"Why is there a 'but?' Kate asks sharply. "How about stop at 'celebration?' And just stop there."

Here, Kate points out something crucial to the conversation about concern over someone's weight. Oftentimes, the "concern" is framed as proof that someone cares for their friend, relative, or social media pal. The "concern" is said to exist for the fat person's benefit. So often, however, the "concern" is patronizing and wholly unnecessary. It detracts from any genuine words of affection or celebration because it is delivered in the same dehumanizing fashion not atypical of strangers' comments at the doctor's office, in the school hallway, or on the street corner.

At one point, Rebecca tells Kate that what she's doing is "irresponsible." What feels more irresponsible, however, is that her concern for her daughter replicates the same poorly informed concern of an Instagram troll commenting on a plus-size blogger's bikini photo. Instead of educating herself on topics of Health At Every Size, or the adverse health effects of fatphobia, or the ways the medical industrial complex and the diet industry have essentially been working hand in hand to feed the masses manipulated information about weight, she is simply reiterating fat shaming perspectives that Kate has been well-acquainted with since childhood. Hell, they're perspectives that she recently had to stand up against in order to get her doctor to perform IVF in the first place.

Towards the end of the episode, when Rebecca has a lightbulb moment in which she seemingly remembers that supporting her daughter is more important than being a harbinger of doubt, she confesses, "The thought of anything happening to you, anything, anything that could put you in real harm, is just paralyzing to me."

I don't doubt that this is true. As a mother, the thought of anything harming my kids is among the scariest things that crosses my mind. I don't doubt that, all in all, Rebecca is actually a really good parent. A strong role model, even. I don't doubt that she's been fed the same scaremongering information about fatness that most of us have, and that part of her genuinely is scared for her kid's wellbeing.

More like this
I Tried Kendall Jenner's No-Pants Look As A Plus-Size Woman
By Sarah Chiwaya
Jameela Jamil Defends Sam Smith After Trolls Body-Shamed Them
By Jake Viswanath
Airris From 'MAFS' Says He Doesn’t Regret Going To Decision Day With Jasmine
By Brad Witter
Shaq Might've Spoiled His Relationship Status With Kirsten After 'MAFS'
By Brad Witter
Get Even More From Bustle — Sign Up For The Newsletter
From hair trends to relationship advice, our daily newsletter has everything you need to sound like a person who’s on TikTok, even if you aren’t.