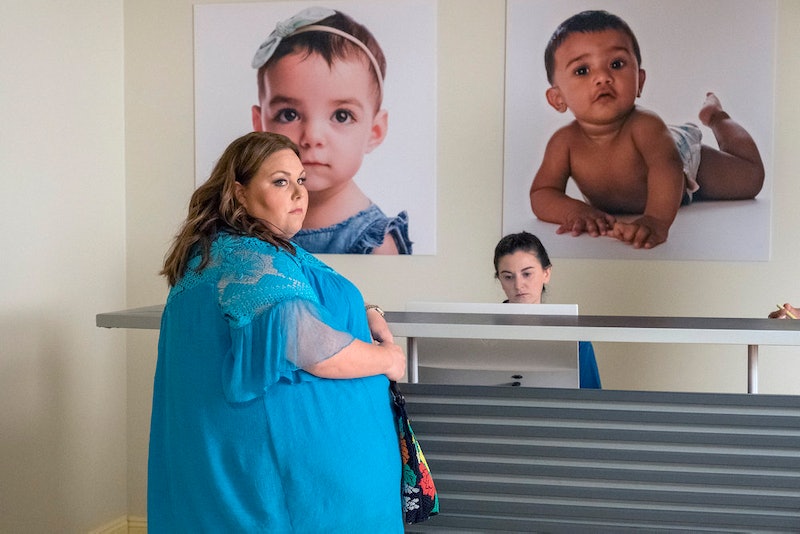 Representation propels acceptance, and when it comes to network television, there is no better platform at the moment than one of the most-watched shows on NBC, This Is Us. The series’ Season 3 premiere aired on Sept. 25 to an audience of 10.3 million, and in classic tearjerker drama fashion, it served some pretty difficult plot twists to its main characters. None were as difficult, however, as the one we find Kate Pearson (Chrissy Metz) struggling with during the first two minutes of the episode. After suffering a miscarriage and repeatedly trying, unsuccessfully, to get pregnant with her husband Toby (Chris Sullivan), Kate learns from her doctor — rather bluntly — that she has Polycystic Ovarian Syndrome (PCOS), a condition that leaves sufferers dealing with irregular menstrual periods, hormonal fluctuations, hair loss, hirsutism, and fertility issues. The fact that PCOS is being highlighted on This Is Us is huge. Though it affects one in 10 women according to the U.S. Department of Health, it's hardly mentioned on television as a whole, let alone on a show with such a large audience on a major network. As someone who struggles with PCOS, the amount of relief I felt upon hearing about Kate’s diagnosis was endless. We’re finally talking about this condition that so many women have silently grappled with for so long.

The relief was short-lived, however, and pretty much came to a crashing halt when Kate’s doctor continued her sentence. “The tests show you have PCOS. It could be linked to your weight and causing fertility problems.”

And there. There it is. That last line, “it could be linked to your weight and causing fertility problems.” Sure, representation of little-discussed conditions that affect millions of women around the world is important — but only when it’s accurate representation, not just a plot point meant to make people reach for their tissue boxes. That sentence uttered by Kate's doctor in such a throwaway fashion isn't accurate representation, it's essentially implying that Kate's weight is to blame for her fertility struggles and her miscarriage. This is a toxic, fatphobic thought process that is presented to so many women of all sizes who struggle with PCOS — and it'd be fine for the episode to include it if any effort was made throughout the rest of the episode to explain why it's wrong. But, based off treatment of Kate's PCOS diagnosis throughout the rest of the episode — which only manages to perpetuate harmful stereotypes about a condition that's already rarely discussed — I’m finding it hard to hold onto faith that This Is Us will portray PCOS accurately within this season.

That sort of accusatory, your-pain-is-your-fault implication hasn’t been exclusive to any one doctor, either. And, being younger and uncomfortable in my body, I believed them.

The shocked, devastated look on Kate’s face when she was diagnosed with PCOS reminded me of the look on my own face when my doctor told me I had PCOS. It was five years ago, in a small, dimly-lit office at Mount Sinai Hospital in New York City. At 22 years old, I may not have been trying to get pregnant at the time like Kate was, but I was someone who was just beginning to enter her adult life — and hearing the diagnosis broke me. I could barely control the tailspin of questions my thoughts devolved into. Would I ever be able to have my own children? I’d always said I didn’t want them, but was that just because I thought I’d always have the option anyway? Was it curable? How did this happen? What caused it? How do we treat it? Did I cause this? Was I broken? Was my life ever going to be normal?

My questions were endless, and my doctor didn’t have much else to say other than the only treatments were birth control to regulate my hormones, and weight loss. In fact, she told me that the symptoms PCOS had been causing me to experience — irregular and/or nonexistent periods, depressive episodes, unbearable mood swings, acne — were all because I needed to lose weight. She may as well have just said that the fact I had been feeling shitty was my fault for not being thin; at least that would have saved her some breath.

That sort of accusatory, your-pain-is-your-fault implication hasn’t been exclusive to any one doctor, either. And, being younger and uncomfortable in my body, I believed them. I believed that my condition was due to my inability to lose weight all my life, and I proceeded to restrict my calorie intake so excessively that I was weighing the lettuce I put in my salads to ensure I didn’t go above the daily 600 calorie/10 gram carb limit I’d set for myself. I lost weight rapidly, going from a size 22 to a size 4. As my doctors applauded, I had fainting spells on a regular basis, and as my family and friends complimented me left and right, I plotted how to cut more calories without killing myself. Still, even at my lowest weight, the PCOS symptoms didn’t stop; and suddenly, doctors were changing their tune about how to manage the condition. “PCOS is a little-understood condition,” they’d tell me. “It’s not linked to weight for everyone; but hey, you look great!”

This Is Us, unfortunately for Kate, seems to be going down a similar path, and that’s extremely worrisome — not just for everyone who’s watching the show and learning about PCOS, but also for those suffering with PCOS who might be made to feel, all over again, that their condition is their fault. In a scene later in the episode, Kate and Toby are sitting in a renowned fertility doctor’s office, discussing their options for invitro fertilization. The doctor tells Kate in a no-nonsense, almost vitriolic fashion, that she’s not going to take Kate on as a patient because of her weight. “At your weight,” the doctor tells Kate, “the chances of a successful pregnancy are very slim, even if you go through invitro.” Then, she twists the knife: “Egg retrieval is invasive. At your BMI, going under anesthesia for an elective procedure is not advisable… There are liability issues.”

Reacting in a way that someone who has just been told their body is a literal liability, Kate proceeds to emotionally tell her friends at her birthday brunch later that day that the appointment didn’t go well. In front of a cake her friend places in front of her (that’s literally just a pile of raw carrots, something I’m not even going to attempt to discuss at this moment), Kate fights back tears as she proceeds to blame herself and herself only for not only her fertility struggles, but also for her miscarriage.

This is something that countless fat women grappling with PCOS have felt at one point or another, so Kate’s reaction here is fairly realistic — and it would be acceptable if the episode went on to acknowledge that none of Kate’s fertility struggles, including her miscarriage, are her or her weight’s fault. That doesn’t happen, of course: Instead, the episode ends with Kate receiving a call from that same IVF doctor, who has, essentially, reconsidered her stance on fat people, and is now willing to help Kate, though she says “there’s about a 90 percent chance of failure here," in reference once again to Kate's weight.

It's meant to be a happy scene, but it's really the opposite: Instead of coming to the realization that her dreams aren't at the mercy of her PCOS diagnosis, Kate hugs her doctor, teary-eyed and overjoyed. Again, it was clearly a scene meant to make viewers happy sob with Kate, despite effectively using PCOS (and her weight) to define Kate's entire character.

But Kate is not defined by her PCOS. If any show or film wants to talk about PCOS, it needs to acknowledge this — if not, then This Is Us will be no better than the doctors who told me that my problems would be solved if I were thinner. Instead, the show's writers need to acknowledge that PCOS is a little-understood condition which, as the National Institutes of Health reported in 2017, receives far less funding than other chronic disorders with "similar or lower mortality and prevalence," and that it hasn’t been researched enough to confirm any real correlation between weight and symptoms (as the New York Times pointed out in 2014, a good deal of PCOS sufferers are thin). Share the fact that PCOS affects women of all sizes and ages, and that, as the PCOS Awareness Association stated on its website, many women with PCOS do get pregnant with the right support from medical professionals.

One of the questions I asked myself on the day I was diagnosed was whether or not my life would ever be normal. At the time, I didn’t believe that it ever would be. But I was wrong. PCOS may be one part of my life, but it’s not my whole life — and weight has nothing to do with it.

If This Is Us wants to do anything for PCOS visibility, it needs to drop the waterworks, and stop perpetuating fatphobic myths for ratings.