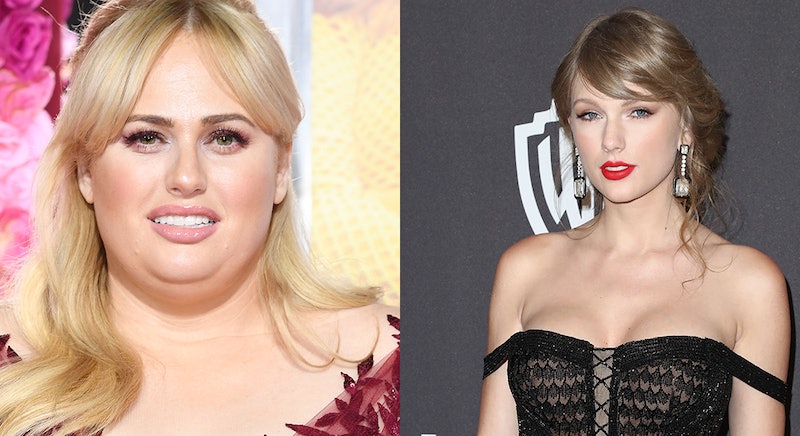 While there's still so much being kept under wraps about the upcoming film, audiences now know this: Taylor Swift's Cats character is going to be one sultry feline. Thanks to her co-star Rebel Wilson, who teased a bit about what's in store for Swift's character Bombalurina, fans now have a little insight. From Wilson's brief statement, it seems Swift's Reputation Tour persona may be a bit of inspiration for her character in the movie.

“She’s incredible," Wilson said about Swift in an interview with Entertainment Tonight. Wilson plays Jennyanydots in the upcoming film adaptation of the iconic Andrew Lloyd Webber musical. "She’s such a lovely girl and I personally think her cat is the sexiest out of all cats,” the actor said. Between Swift's recent red-hot stage setups with smoke and seductive dance moves, Wilson's statements should really come as no surprise to fans. Swift's newfound stage persona is here to stay.

And when she's not being a sexy Bombalurina, it seems Swift has enjoyed showering her co-stars with presents. In February, a few Cats cast members posted documentation to social media of bags packed with things Swift had gifted them. Ballet dancer Eric Underwood posted a photo of a bag stuffed gifts (including Reputation merchandise) to his Instagram story, writing, "When you come home from work with gifts! Thank you to the INCREDIBLE @taylorswift." Actor Redmand Rance also posted his bag on social media and wrote, “When @taylorswift gets the whole cast gift bags," according to People.

Beyond gifting swag, Swift has given fans peeks of set life here and there on Instagram. In late January, Swift posted a selfie from set next to her character name with the appropriate caption: "Meow." People also reported that she posted a brief video to her Instagram Story running and prancing in the London snow, saying, "So I am on set for Cats and it is fully snowing." About a week later, Swift posted two selfies from her trailer with the caption, "This trailer courtesy of Cats the film. Cat hair on my jacket courtesy of actual cats, Meredith and Olivia."

Swift was confirmed as part of the Cats cast in July 2018 when first reported by Deadline. Joining Swift and Wilson are A-list actors like Jennifer Hudson, Idris Elba, Ian McKellen, James Corden, Judi Dench, and singer Jason Derulo. (Last June, That Hashtag Show reported Rihanna and Anne Hathaway were eyed for Cats but both had to turn it down due to scheduling conflicts.) According to Playbill, the film is set to premiere in December and is helmed by Les Misérables director Tom Hooper.

Although the award-winning performer has made the stage her home, this won't be the first time she'll appear on the big screen. She starred as Taylor Lautner's on-screen girlfriend in the 2010 romantic-comedy Valentine's Day. Swift also lent her voice to the 2012 animated film The Lorax alongside Danny DeVito and Zac Efron. It seems like Cats, however, is unlike anything Swift's done thus far and is really an opportunity to bring all of her worlds together.