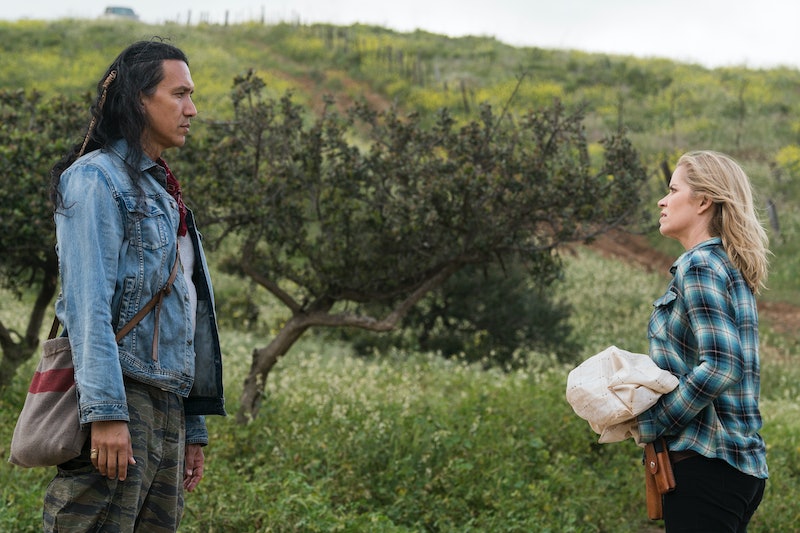 When Fear The Walking Dead started out, the core survivors were just adjusting to post-apocalyptic living — and warring factions with macabre habits didn't exist yet the way they did when Rick Grimes woke out of a coma on The Walking Dead. Three seasons in, however, and that is no longer the case. Madison and Strand are in the thick of it now, often separated and always trying to negotiate their own survival. New episodes will finally air again on Sunday, so let's recap Fear The Walking Dead Season 3 thus far and remember where the lines were drawn earlier in the summer.

Season 3 started at a military compound, then moved to a survivalist ranch. Both locations were run by prominent members of the Otto family. There's Troy, whose position of power took him to dark places with his army pals. He was experimenting on prisoners and purposely killing them to watch them become zombies. It wasn't great. He also has a weird obsession with Madison. His father Jeremiah, who Nick killed in the midseason finale, was worse. While he kept his family alive, his views were problematic. He was endangering his community, and both Madison and Nick had to make a tough decision. There's one other living member of the Otto family, Troy's brother Jake. He's fairly normal.

So, while Madison has reunited with both of her children, not all is well with their situation. Travis died at the beginning of the season, so there are no more survivors from the Manawa family on Fear The Walking Dead. After recovering from an injury, Nick's love interest Luciana left to go off on her own again. Alicia has integrated herself into the ranch society, but has leadership instincts and could easily take charge later on.

The midseason finale also revealed that when Madison was a child, she killed her alcoholic and abusive father in order to save herself and her mother. The guidance counselor's survivalist instincts finally have more context.

Oh, and Nick finally got a haircut. That's one of the most important Season 3 developments. Here are some other highlights from the first half.

By now, everyone has left the hotel that featured in Season 2. Strand was last seen burning down Abigail the yacht, having left the hotel after the others and gotten into a weird situation with his old boss (from before the outbreak) and Daniel Salazar. He'll surely have new situations to talk himself out of when the series returns.

Daniel, who amazingly survived the fire in Season 2, is still looking for his daughter Ofelia — who has hooked up with the newest antagonists, a group called "The Nation" that is lead by a man called Walker. It's confusing, but West Coast folks don't call the zombies "walkers" the way characters on the original series do. This further separates the two shows. Anyway, this group is...

Qaletaqa Walker, also known as Taqa, is a Hopi chief whose reservation has a long-standing land dispute with the Otto family. The end of the world has not changed that. It's actually made it worse, due to the resources available on the ranch. The two groups are practically at war by the midseason finale.

Fear The Walking Dead has woven a tangled web for sure, one that Season 3 will have to unravel when it returns. Will Ofelia mediate between Madison and Taqa in the future? Will her father become a villain? In the midseason finale, Madison made peace with Walker's Nation. This is sure to turn some heads and cause plenty of conflict. If only everyone knew that Madison should just be in charge of everything.