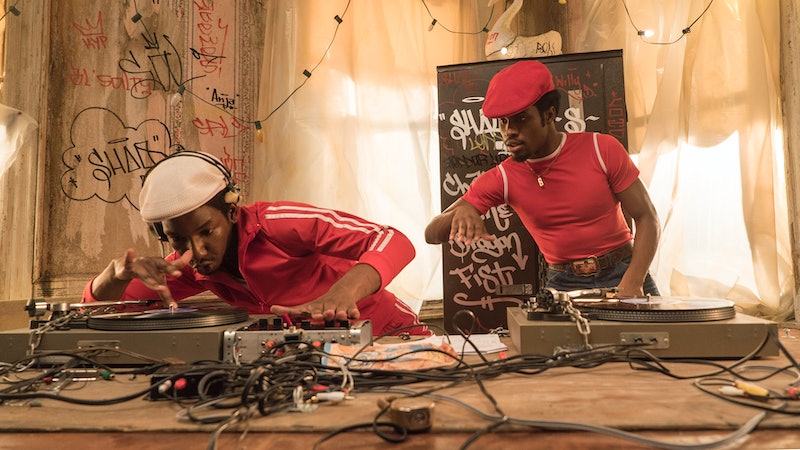 The first season of Netflix's original musical drama The Get Down debuted in Summer 2016, but you've actually only seen half of the story. Netflix is releasing the season in two segments, so those six episodes were technically Season 1A. On Friday, April 7, the second half of the season will hit Netflix, but it's been almost a full year, so you might have forgotten some key details about the story. But don't worry, I've created a handy recap of The Get Down Season 1 to refresh your memory of the show's many characters, and exactly what happened between them in those first half-dozen episodes.

In case you really, really can't remember anything about The Get Down (hey, there's a whole lot of TV on right now, no shame), it's set in New York City, in a beautiful recreation of 1977 South Bronx. It centers on a group of mostly black and Latinx teens who are classmates, neighbors, and friends, and have major aspirations in the music scene, split between cocaine-fueled disco and the still-burgeoning hip hop scene. And, speaking of, if you want to really be prepared for The Get Down Season 1B, you need to remember not just the plot of the series, but the soundtrack, so if you really want to get into it, stream it on Spotify while you're recapping Season 1A.

Episode 1: "Where There Is Ruin, There Is Hope for a Treasure"

This super-sized premiere episode is more like a movie, directed by executive producer and creator Baz Luhrmann, who uses his signature big, loud style with lots of splashy colors, cutting between scenes almost intuitively, making every moment feel climactic.

If I was half as talented as high school sophomore Zeke, I'd be writing this whole recap in rhyme. His teacher believes he should become a poet, while he is literally chased into hip hop when he and notorious DJ Shaolin Fantastic both go after the same record. Shao begins to mentor Zeke in the art of "The Get Down," a style of DJ'ing that uses two records to make a sustained beat, and discovers Zeke's poetic talent doubles as freestyle rapping.

Meanwhile, Zeke's crush (and good friend) Mylene is from a conservative household, but wants to become a disco star, and manages to sneak into Les Inferno, a popular nightclub funded by drugs and run by Fat Annie and her son, Cadillac, who's as quick to shoot someone as he is a good dancer. Zeke and Mylene kiss on the Les Inferno dance floor.

Episode 2: "Seek Those Who Fan Your Flames"

Zeke and his friends, the three Kipling brothers, begin working with Shao and fictionalized real hip hop pioneer Grandmaster Flash in discovering new DJ techniques (like using a crayon to mark the record's key beat), though Shao's expansive record collection burns when the building he's squatting in is burned for the insurance money.

Mylene, with the help of her uncle, a local politician, captures the attention of a disco producer by orchestrating a stunt in church where she sings a dramatic solo, against the wishes of her pastor father.

Episode 3: "Darkness Is Your Candle"

During a blackout, Mylene and the producer, Moreno, agree to record a demo they can bring to a record label as proof of her talent.

Zeke and friends, going by "The Fantastic Four, Plus One" are unknowingly roped into disposing of the body of a child gang member for Cadillac, because Shao has been dealing drugs for Fat Annie. They also throw a party in the Kipling house in order to replace what Shaolin lost — but without the DJ's knowledge, they steal a bootleg recording of Grandmaster Flash spinning and pretend it's original work, a huge faux pas that exiles them from the hip hop community.

At the behest of the aunt he's living with, Zeke takes an internship with Mylene's uncle, Papa Fuerte, who is struggling to find a mayoral candidate that will invest money for affordable housing in the South Bronx. Zeke attempts to balance that new responsibility with helping Shao expose the real bootleggers and regain his standing as a DJ. And in a subplot, Dizzee, one of the Kipling brothers, begins to fall in love with a fellow graffiti artist, Thor, as Papa Fuerte considers coming out against graffiti in order to get the support of Ed Koch.

Episode 5: "You Have Wings, Learn to Fly"

Because of Moreno's cocaine addiction, he's struggled to come up with a record for Mylene, but is struck with inspiration to mix disco with a hymn and they record "Set Me Free" in Mylene's father's church, with his reluctant blessing.

Zeke and the Kiplings are able to prove Shao's innocence by exposing the real bootlegger and showcasing their real freestyling capabilities, winning back the respect of Grandmaster Flash.

Episode 6: "Raise Your Words, Not Your Voice"

In the season finale, Zeke manages to stand up for graffiti in a coded speech given to a crowd during his internship. Mylene's record is nearly killed by Moreno's past indiscretions, but manages to become a radio hit. And Shao, Zeke, and the Kiplings, competing as "The Get Down Brothers," manage to destroy the competition and prove their undeniable talent.

Now you should be all caught up on The Get Down — and the only way to get "Set Me Free" out of your head is to see what new records are in store in Season 1B.