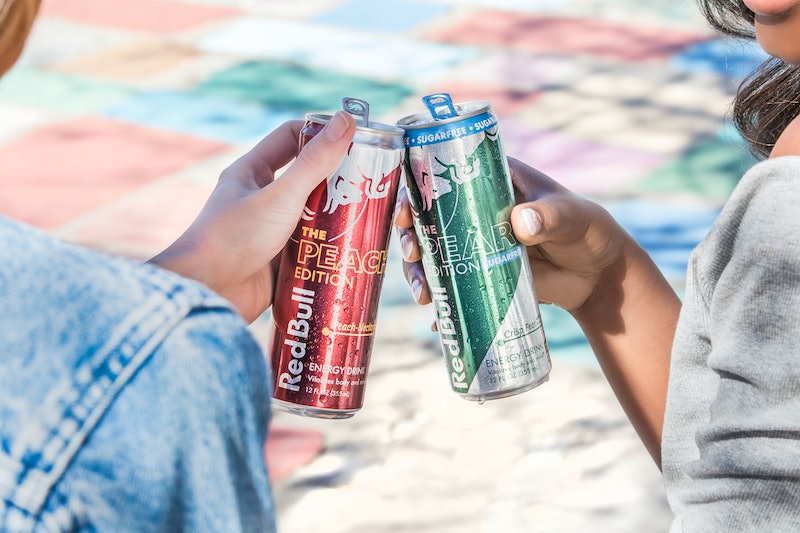 There's only one drink that has been known to give you wings, and it isn't coffee. Red Bull, a fizzy energy drink with a peculiar, hard-to-identify flavor, has been fueling everyone from college students to working professionals to athletes for over 30 years. Not much has changed with the original recipe in the time since it has been released, but that doesn't mean variations on the original haven't been made. The newest varieties of Red Bull, officially launching today, are Red Bull Peach and Red Bull Pear Sugarfree Edition.

The Peach emoji is bar none one of the best love emojis of this generation. It goes without saying the image has come to represent more than Georgia's state fruit, but it is worth remembering peaches are delicious, and arguably one of the best fruits out there. So it only makes sense to make it more accessible by putting it into energy drink form.

Per a press release sent to Bustle, Red Bull Peach Edition offers the essence of Red Bull you know and love with the extra special taste of peach-nectarine exploding in every can. The bright new flavor is an addition to the already existing Editions line, which hones in on the flavors of fruit not typically found in beverages.

In addition to Peach-Nectarine, Red Bull is also introducing the complementary Crisp Pear flavor, which is also part of its Sugarfree line. The two new flavors join Red Bull Red (cranberry), Blue (blueberry), Yellow (tropical), Orange (tangerine), Green (kiwi apple), and Coconut (coconut & berry) to complete the Red Bull Editions line. Red Bull Pear Edition Sugar free joins Red Bull Lime Edition Sugarfree, which is limeade, and The Red Bull Purple Edition Sugarfree, which is açaí berry. Essentially, if there is a fruit that you love, Red Bull has you covered in its veritable rainbow of different fruit flavors. Plus, let's be real — Instagramming bright-colored cans in drinks may be the only way we survive the long wait for the summer. And these are nothing if not Instagram-worthy.

In 2018, a former Red Bull heavyweight threw his hat in the beverage game and released something similar, yet unexpected. Henry Drnec, the former CEO of Red Bull UK, introduced yet another drink that might appeal to people whose energy is on their mind. His creation, called Sober Up, is a detox drink intended to prevent hangovers and promote liver heath. Originally launched through an IndieGogo campaign, Sober Up is marketed to appeal to those who want to enjoy alcohol, but want to consume it in a responsible way. If you wanna get technical, it isn't even a drink; it's more of a shot — it's described on the website as "a detox shot made with naturally sourced ingredients."

But if you need a pick-me-up over a "Sober Up," better stick with the classics. You can find 12-ounce cans of the new Red Bull flavors where you usually purchase drinks; just remember to fly those wings responsibly.