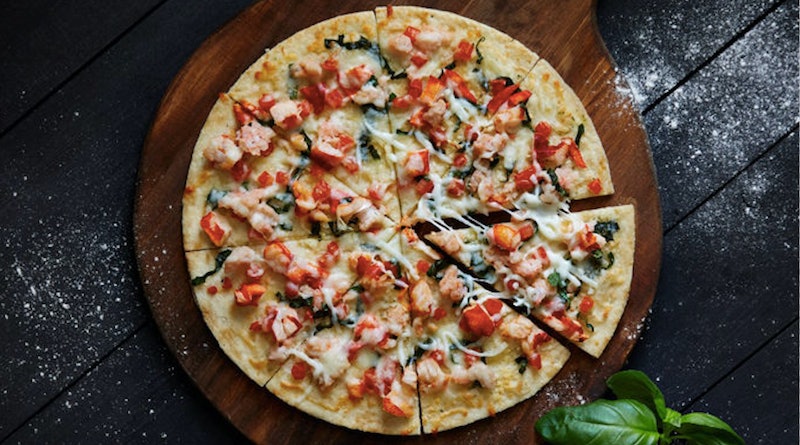 Attention, those who love chain restaurants, seafood, and salt, a new deal is here for you for one day only. (At least until it happens again.) As reported by Chew Boom, Red Lobster is offering free lobster pizza — with the purchase of two adult entrées — on Tuesday, September 25. If you've needed a good excuse to get your Cheddar Bay Biscuit on, here it is.

As confirmed by the chain itself, the special is in honor of National Lobster Day. In addition to purchasing two entrées, those who want the free pizza will have to dine in the restaurant, not order delivery or pickup. The special will continue on the 25th while supplies last, so if you want the pizza, you better show up early just to be safe.

Red Lobster's pizza features Maine lobster, Norway lobster, and langostino topped with mozzarella cheese, fresh tomatoes, and basil. The pizza is a constant on the appetizer menu, and the usual price ranges from around $10-$15 depending on location. While something so cheesy might seem like an odd choice for a seafood restaurant, the Lobster and Langostino Pizza isn't the only cheese-filled option on the menu. Red Lobster also has mozzarella sticks, Seafood Stuffed Mushrooms with Monterrey Jack cheese, Langostino Lobster-Artichoke-and-Seafood Dip, and Lobster Mac & Cheese.

Not into something so cheesy? Another special the Lob is currently offering is Endless Shrimp, which probably sounds either terrifying or wonderful depending on your feelings about the crustaceans. Endless Shrimp allows guests to choose from five different shrimp dishes and try as many as they like. (After the first two, though, you have to order one at a time lest this shrimp party spirals out of control.) The special also includes a salad, a side, and unlimited Cheddar Bay Biscuits.

There are also early-dining specials available at most locations before 6 p.m. on weekdays that differ depending on the day of the week. For instance, $15 Four-Course Wednesday and $10 Fish Fry Friday. Some locations also have happy hours that include deals on beverages and appetizers.

While lobster and pizza might seem like an odd combination for some, this is hardly the most surprising combo Red Lobster has ever offered. That honor has to go to the restaurant's Lobster and Waffles dish, which debuted earlier this year for a limited time. It's basically what it sounds like, except the waffle is a Cheddar Bay Biscuit waffle and the lobster is deep fried. And, if you're wondering, yes, the restaurant did serve it with a side of syrup.

Unfortunately for anyone interested, Lobster and Waffles is no longer on the menu, but if you want the free pizza deal, you'll have plenty of other entrées to choose from. There's shrimp. There's lobster. There's crab. There's steak. There's pasta. There's even chicken, which... what? You went to Red Lobster for chicken? OK, you do you. Just get to Red Lobster on September 25, if you want the pizza, because lobster and langostino covered in cheese waits for no man.