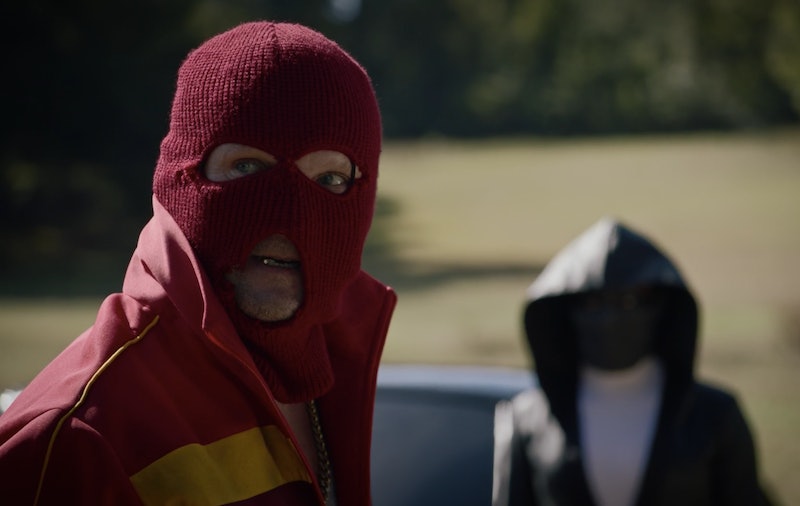 HBO's Watchmen is based on the graphic novel by Alan Moore and illustrated by Dave Gibbons, but it's more of a spiritual successor than a straight adaptation. As such, audiences — especially those unfamiliar with the source material — may be fuzzy on which characters appeared in the comics and which didn't. The carryovers, for those interested, include Doctor Manhattan, Ozymandias, Silk Spectre, and Rorschach (or, his mask, at the very least), with more potentially to come, like Nite Owl and The Comedian. While Red Scare isn't in the Watchmen comics, his costume is a nod to the graphic novel.

Out of all the hooded vigilantes in the Tulsa Police Department, Red Scare (played by Andrew Howard) seems like the loosest cannon, wreaking havoc at the Seventh Kavalry camp after their chief of police is murdered. Then there's his get-up, which is one of the more...lackluster costumes — especially when compared to Angela Abar's svelt Sister Night.

"[Red Scare] has the Watchmen yellow across his chest, but also it was important that he just took a tracksuit that might've been at his house and put on this red ski mask," the Watchmen costume designer, Meghan Kasperlik, told Polygon. "That was his costume, and it totally obscures his face, but definitely is interesting and draws the attention."

To back up a bit, the policemen in the HBO series began wearing masks because of an event called the White Night, when members of the Seventh Kavalry attacked (and in many cases killed) officers in their home. As a result, they donned disguises to keep civilians from identifying who were members of the police force. In the comics, however, all masked vigilantes were outlawed in the '70s, per Collider, after which only Doctor Manhattan and The Comedian were allowed to keep working for the U.S. government.

"Why would you wear a mask? Does the mask protect you or does it unleash your most dangerous and violent tendencies?" Damon Lindelof asked Vulture rhetorically. "Those are the ideas that I'm more interested in exploring. People keep saying Watchmen is about superheroes. Other than Dr. Manhattan, they're not. None of them have powers. They're vigilantes, at best. So it's like, 'What if the police start dressing up?' It's a provocative and interesting question."

After The Comedian was murdered, thus kicking off the events of the graphic novel, Dr. Manhattan fled to Mars (cue the memes), and the Soviet Union invaded Afghanistan. In this alternate history, America also won the Vietnam war and Nixon was still president (it's Robert Redford in the HBO series). And since the Watchmen comics took place during an alternate version of the Cold War, Red Scare's provocative name is likely a carryover from that.

But while the U.S. was concerned about nuclear war with the Soviet Union, citizens are facing a different but just as prevalent threat today. "[O]ne of the things that made the original [Watchmen] resonate is the anxiety that...the U.S. and the USSR are about to blow each other up with nuclear weapons," Lindelof told NBC News. "And when I was reading it as a 13-year-old in 1986, I was worried about that. So you extrapolate that in 2019, so you essentially say, what is creating the most anxiety in America right now? And for me the answer is undeniably race."

Indeed, whereas the graphic novel's tension was between the U.S. and Soviet Union, the series ambitiously tackles issues of white supremacy, reparations, surveillance, and police brutality — and that's just in its first three episodes. Red Scare, by extension, seems to represent the unhinged brutality some members of the Tulsa police are capable of.

One of the motifs that's echoed throughout the graphic novel is the phrase, "Who watches the Watchmen?" which refers to the fact that no one is policing these vigilantes (a question also raised in Captain America: Civil War). Red Scare, in particular, seems like one to watch.

More like this
'The Simpsons' Will *Finally* Address How They “Predict The Future”
By Sam Ramsden
'The Sandman’s Ending Is A Departure From Neil Gaiman’s Comic Book Series
By Kadin Burnett
The 'PLL: Original Sin' Creators Say A’s Identity Will Be “Very Clear” By The Season Finale
By Alyssa Lapid
The Bestselling Novel 'The Doll Factory' Will Be Adapted Into Thrilling TV Series
By Catharina Cheung
Get Even More From Bustle — Sign Up For The Newsletter