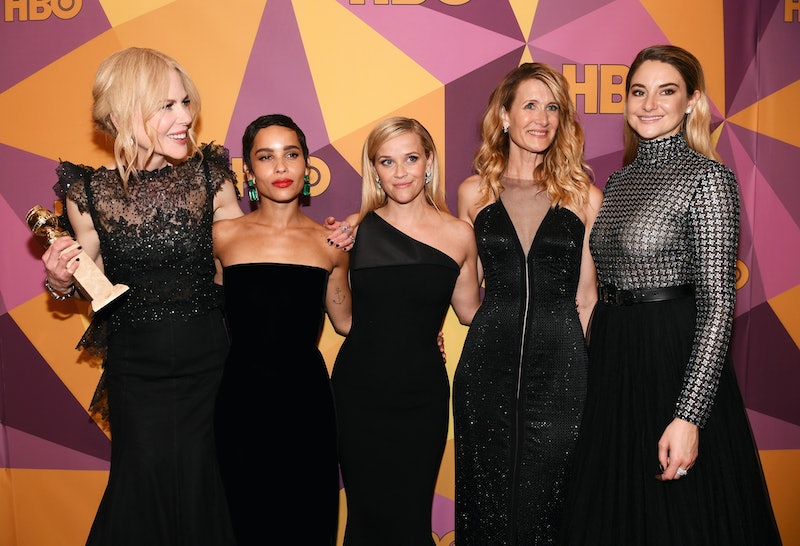 Reese Witherspoon knows how to keep fans laughing. On Friday, the actor shared a photo with her Big Little Lies costars, but one important person was missing. Fortunately, Witherspoon photoshopped Zoë Kravitz into the BLL picture, so that she wouldn't be left out of the occasion.

Witherspoon used the hashtag #BLL2 on the post, so it's possible the photo was taken while the second season of Big Little Lies was filming. She, Nicole Kidman, Shailene Woodley, and Laura Dern might have been filming scenes that didn't include Kravitz that day, which would explain why she was missing from the photo. Or maybe the cast was just hanging out for fun, which is also plausible.

"Don't worry @zoeisabellakravitz, I know you have #fomo so I put you in the photo... 😂 #BLL2," Witherspoon captioned the picture, using Instagram's slideshow feature to show the before-and-after she added Kravitz into the shot. And the image she chose to add is absolutely hilarious, too.

Witherspoon used a still from Kravitz's Michelob Ultra Super Bowl ad, to great comedic effect. The way the actor added her costar in, it looks like Kravitz is casually enjoying a beer and paying the rest of them no mind. (She's also dressed in a flowy white top, while the others appear to be bundled up for cold weather.)

Details about Big Little Lies Season 2 have been fairly scarce so far, and fan anticipation has been building for months. In February, the five actors shared at a Television Critics Association panel that BLL's second season will air on HBO in June. But there's still not a full-length trailer for the new season, which will also include Meryl Streep.

Streep will play Mary Louise, mother-in-law to Kidman's Celeste, whose husband, Perry, died at the end of the first season. Apparently, Witherspoon's Madeline throws an ice cream cone at Mary Louise in the upcoming season, but that's not exactly a ton of information to go on. (Plus, that fun fact only became public knowledge because of paparazzi photos, not official photos from HBO.)

But while official details about the show's next season are still lacking, what's not lacking is the real-life friendship between the five actors. Kravitz may not have been with the other four stars when the new picture was taken, but there's definitely no love lost.

In fact, Witherspoon and Kravitz are close enough that Witherspoon interviewed her costar for a Harper's Bazaar feature in the magazine's October 2018 issue. During the conversation, the Legally Blonde actor praised her BLL costar's "willingness to speak honestly about racial stereotyping in Hollywood." She also said that Kravitz was her "style crush," so it's clear that she admires plenty of things about her fellow actor.

Hopefully, the full-length trailer for Big Little Lies Season 2 will be here sooner rather than later. In the meantime, though, fans can look back on all of the photos the cast has posted together — they really do seem close. And if Kravitz decides to return the favor by photoshopping Witherspoon into a different picture sometime in the future, that'd be even better.