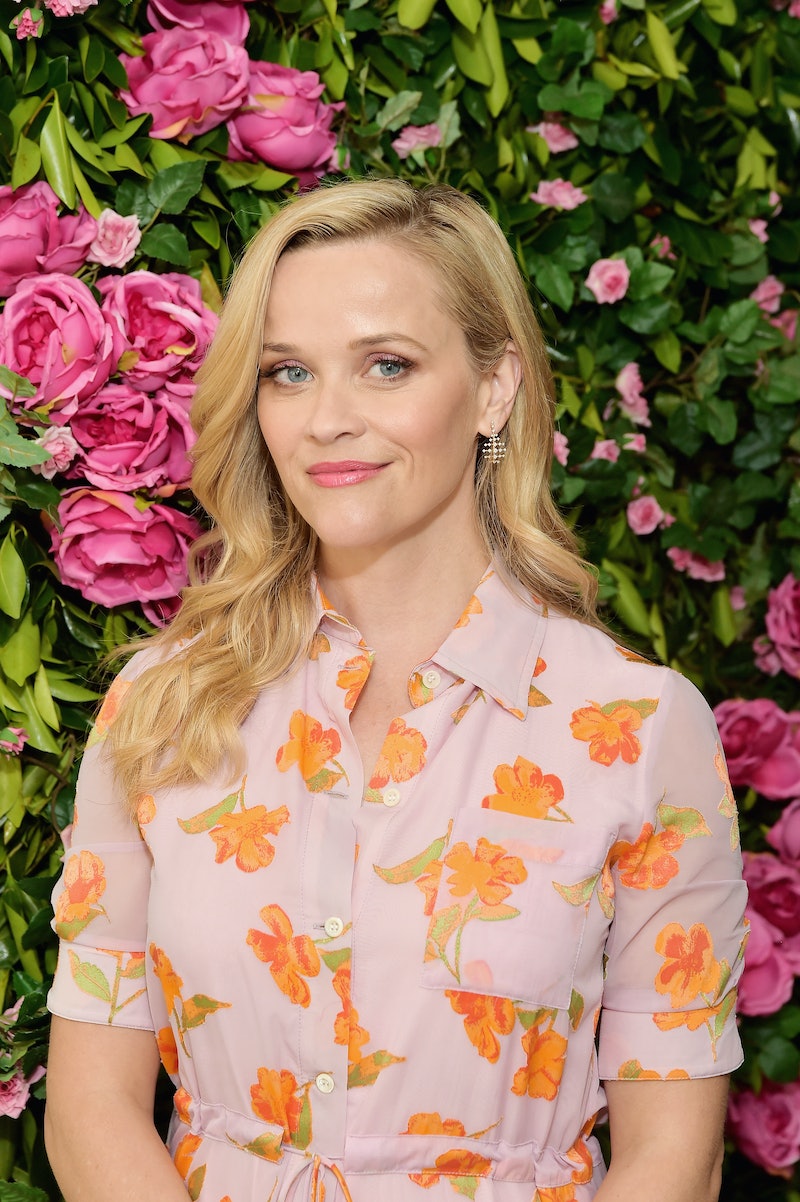 There is no question that Reese Witherspoon is an icon, but you might not know it if, let's say, you bumped into her at a Beverly Hills garden tea party and somehow had no idea who she was. That's the setting I found myself in on Wednesday afternoon to celebrate the launch of Elizabeth Arden's White Tea Collection. Of course, everyone at the rose-bedecked party knew who Witherspoon was, all likely able to recite lines from Legally Blonde and Sweet Home Alabama in an instant. Still, the Elizabeth Arden storyteller-in-chief blended herself into the flocks of beauty influencers wearing pastel-colored outfits in her pink, floral-printed Altuzarra dress as if she were just another guest.

Witherspoon floated around the garden, complimenting others on their makeup and ensembles, making small talk and taking selfies, like a charming new friend you make over a glass of rosé would — not an actress, producer, and entrepreneur with an Oscar, a clothing line, and a media brand under her belt. But who says an icon can't also hang with the girls and talk bad brows and good lipstick? Not Witherspoon, which is also partially why she was so drawn to work with Elizabeth Arden. Because like her, the legendary beauty founder was an advocate for women and was a lover of all things makeup.

"When they approached me about working with the brand, I really started to get into the story of Elizabeth Arden [and] how she was a pioneer in the beauty industry — one of the first female entrepreneurs in this industry. She established this company before she had the right to vote. She championed women's rights and [supplied] pastel lipstick to the suffragettes while they were fighting for the right to vote," she explains to me.

Similar to Arden, Witherspoon has dedicated much of her career to being an activist, fighting for minority communities and equal rights. A few hours before we sat down to chat, Witherspoon took to her Twitter to express her disappointment of the strict abortion laws that had just passed in Alabama, Georgia, Kentucky, Mississippi, and Ohio.

Witherspoon is unafraid to use her platform to express her opinions, however controversial they may be. To her, it's not just a privilege — it's her duty, and she's grateful to women like Arden who helped give her the opportunity to do so. "Frankly, I would not be standing where I am if it weren't for women like [Elizabeth Arden]," says Witherspoon.

Plus, she's a fan of the products. Witherspoon swears by the brand's ceramide and retinol capsules, and is "obsessed" with the new Eight Hour moisturizing sunscreen, which launched this month.

Icon and activist aside, it's obvious that Witherspoon is also a wealth of beauty knowledge. She took a break from the garden party to share her biggest piece of skin care advice, the '90s trends she regrets, and the Big Little Lies character she thinks has the most complicated beauty routine.

Of all the different women you've played, who had your favorite style?

Well, I love Madeline in Big Little Lies. She always has a bold lip and presents her best self to the world. But I also love Elle Woods. Legally Blonde was just a dream. I love hair, makeup, beauty, costumes, shoes, purses — so that was really fun to create that character with [the costume designer] Sophie de Rakoff.

I love the day that she goes to college and she's dressed in a full pink leather outfit with Bruiser who has a matching outfit.

We drink a lot of iced tea. [Laughs] The thing about the South [is that] it is so hot and muggy that your skin is always being hydrated. Now that I live in California, I have to always be putting moisturizer on and spraying hydrating mist throughout day. Moisture is so important as your skin gets older, you have to put the moisture back in.

What's the most important beauty advice you like to give your daughter or your younger fans?

The first thing I tell my daughter is start wearing sunscreen as early as possible — put it on your skin because you will be happy 20 years later. But also beauty doesn't have to be expensive. I love the emergence of all these beauty bloggers who show you how to achieve a look with maybe not the most expensive products. Maybe you want invest in nice skin care that's more high end and better quality. But I'm telling you, Revlon has incredible products that can help you mimic some of these really high end looks on a great budget.

Which Big Little Lies character do you think has the most complicated skin care or beauty routine? Like, who's getting regular facials and investing in luxury beauty and who is just showering and brushing their teeth?

Do you get to influence the makeup look for your character Madeline on Big Little Lies?

Yeah, of course! I work with my makeup artist Molly Stern and I just kind of talk about what this character is, what makeup does she enjoy, what does she like to do, where did she learn to put on makeup? We explore all of that with every character. It's really fun to build the character around those ideas.

You mentioned earlier that Madeline loves a bold lip — why do you think that is?

I think it's a presentation. She always puts herself together before she enters the world. She's probably had the same lipstick color for years and she just knows it looks good on.

You were a rising star in the '90s — is there a beauty trend that you sort of regret at all?

A little bit. It's funny you say that because my next project I'm doing with Kerry Washington is called Little Fires Everywhere for Hulu. We're playing women in the '90s with teenagers in the '90s, so our inspiration boards and our exploration with photo research has been all the ways that we looked in the '90s and boy. Wow. We liked to pluck our eyebrows a lot. And I definitely rocked like too many hair buns at one point. It's pretty funny to see.

Is there a makeup or skin care product from the '90s that you still use today?

I use Cetaphil face wash a lot, Cutex nail polish remover. Things that are standards.

What's the best piece of beauty advice you've ever received?

You know, I love when people encourage you to show your skin. I think sometimes we're told to cover up but sometimes it's nice to just see the texture of your skin or the different freckles that you have. I used to have freckles and I would cover them a lot and I think it's great to just see women expressing themselves and showing different kinds of beauty standards on social media platforms. It's a much more inclusive idea about what is beautiful nowadays.