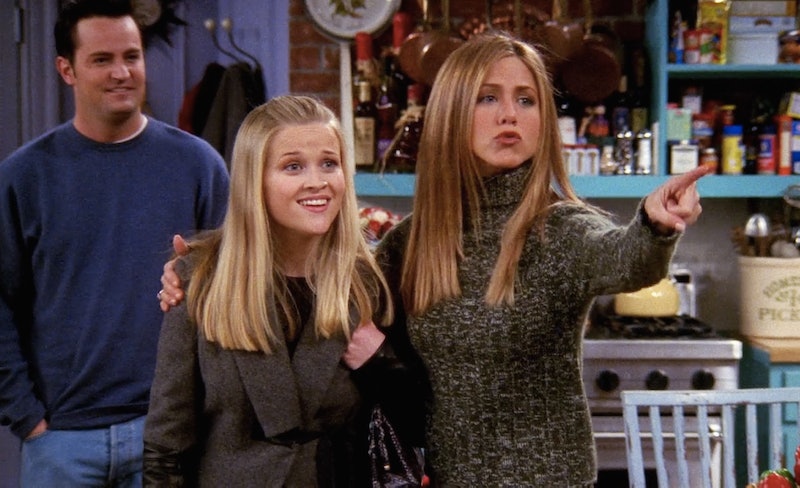 Reese Witherspoon is a national treasure. And, on February 3, 2000, that national treasure appeared in "The One With Rachel's Sister," the first of two episodes of Friends that Witherspoon appeared in as Jill Green, Rachel Green's youngest sister. By the next episode, "The One Where Chandler Can't Cry," she was on her way out the door, but that's OK. One year later, in July 2001, the actor would star as Elle Woods in Legally Blonde, who became a far, far more iconic character than Jill could ever hope to be. But, while re-watching "The One With Rachel's Sister," I couldn't help but notice a line that predicted Elle Woods before Legally Blonde even happened.

Jill's arrival is both unexpected and hilarious, because she knocks on the door when all six members of the main cast are already in Monica's apartment. There's a moment of confusion as they all look around, trying to figure who could be at the door when everyone they know is in that room. Of course, it's Jill, who explains that she's there because their father has cut her off. Then, she declares,

"And you know what I said to him? I said 'I'm going to hire a lawyer, and I'm going to sue you, and take all your money, and then I'm going to cut you off!' ...He said he wouldn't pay for my lawyer."

After this line, Jill explains that, thus defeated, she was sent to learn how to manage finances from Rachel. But given that, as previously noted, Legally Blonde came out just over a year after Jill's final episode aired, it wouldn't be too insane to imagine a world in which she became the lawyer that her father wouldn't pay for.

Imagine, if you will, a world in which Jill is so humiliated by her inability to seduce Ross to get back at Rachel that she flies across the country to attend ULCA. (Say she dropped out, which is part of why her father cut her off.) Say she begins to shine there, especially after becoming a Delta Nu, and begins dating Warner Huntington III. He's the one, she's sure of it. They're so perfect together.

But then he dumps her to go to law school, and suddenly Jill is faced with a reality where, once again, her life is disrupted by her inability to get a lawyer. So, like Elle Woods, she decides to become one.

And, like Elle Woods, it would initially be for shallow reasons. But, like Elle Woods, she would realize her own potential and her worth, taking Harvard by storm and showing a true knack and skill for the practice of law. All without losing her intrinsic blonde-haired, pink-wearing, hairstyle-changing self, and being warmer and more genuine to the women around her than Jill Green could ever brag. She even ends up with a dark-haired love interest of her very own.

Granted, Jill Green is 24 years old when she appears on Friends, and Elle is somewhere around 21 or 22 considering she's a senior in ULCA when Legally Blonde opens. On top of that, Elle is an only child, and got a 179 on her LSAT, neither of which would apply to Jill.

But, come on, guys. Witherspoon's early allusion to the part that would make her famous is just too amazing to ignore.