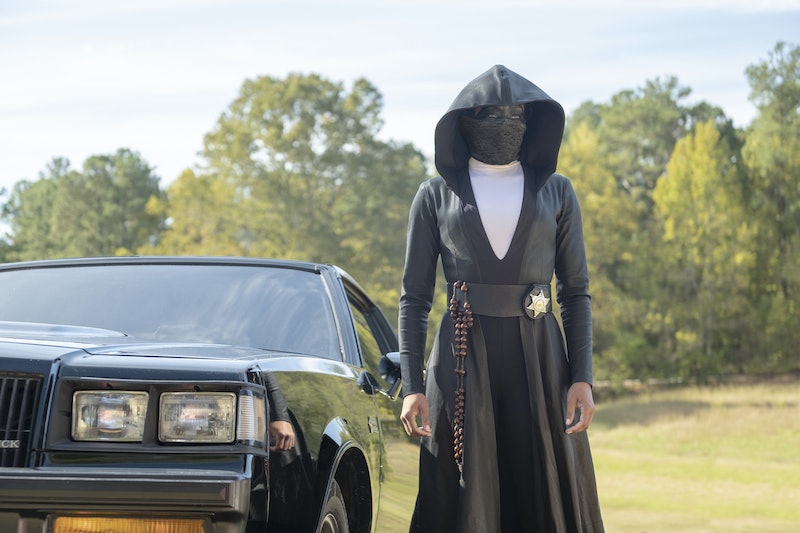 Spoilers ahead for the Watchmen series premiere. Regina King's Watchmen character Angela Abar is the main focus of the new HBO series, which might surprise some longtime fans, since Angela and her Sister Night persona are not from the comics or the 2009 movie. Instead, in David Lindelof's take on Dave Gibbons and Alan Moore's graphic novel, Angela is a person who has been shaped by the world 30 years after the events of the Watchmen comics. And based on King's electrifying performance in the Watchmen TV series premiere, the fact that she's not canon shouldn't really matter for readers of the comic and non-readers alike.

After opening with the Tulsa race massacre of 1921, the majority of the action in the Watchmen premiere takes place in Oklahoma in 2019. As the Los Angeles Times outlined, the comics are set in 1985, so everything that occurred in the comics is 34-year-old history for the TV characters. While some characters — like Jeremy Irons' Ozymandias — are featured both in the comics and the TV show, Angela is a brand new creation. She's raising her family alongside her husband Cal (Yahya Abdul-Mateen II) in Tulsa, where white supremacy is still terrorizing the city in the form of the organization called the Seventh Calvary.

At first, Angela appears to be a mother and a bakery owner as she attends her son's Career Day at school. Yet, her backstory hints that she's got more going on. She was born in Saigon a few years before Vietnam became a state (a nod to the history established in the comics) and was a police officer both in the Asian state and in Tulsa. But when she was personally attacked during the White Night, she claims she retired. "I figured making cakes and cookies was better than getting shot," Angela tells the students.

However, now that cops can wear masks to protect their identities (something that wasn't allowed before), Angela is keeping her police officer identity a secret. After a black police officer is shot, she puts on her nun-like Sister Night costume to go after the white supremacists of the Seventh Calvary stationed in Nixonville. (Another Watchmen comic history lesson: Richard Nixon was still president in 1985 after the 22nd Amendment was repealed.) "I have a nose for white supremacy and he smells like bleach," Angela tells Don Johnson's Chief Judd Crawford. And when the white supremacist won't reveal where the Seventh Calvary is even after entering "the pod," she is the one who gets him to confess with a little beatdown.

A black female police officer who has her own superhero persona is not something that was part of the white male-dominated Watchmen comics. But Lindelof told The New York Times that he wanted to explore white supremacy and race for his Watchmen — and Angela gets to be the hero of that story.

The Emmy, Golden Globe, and Oscar winner King said in the New York Times interview with Lindelof why she was drawn to the character. "This woman was someone I had never seen before," King said. "Obviously, because she's black, that has a lot to do with that. But even more than that, just being the lead and being so strong, but so vulnerable. We see that inner turmoil. Even when you're waiting for her to become unhinged, you don't know exactly what 'unhinged' is for her."

One major plot point that may unhinge Angela is the surprise death of Johnson's character at the end of the first episode. Officer Abar and Chief Crawford had a close relationship and the people responsible for his death called her directly. It appears they were targeting her just as the white supremacists had done years earlier in the White Night. But even if Crawford's death leaves her "unhinged," based on Angela's fearless behavior in the Watchmen premiere, she will be every bit of hero that the world desperately needs.

This article was originally published on Oct. 20, 2019