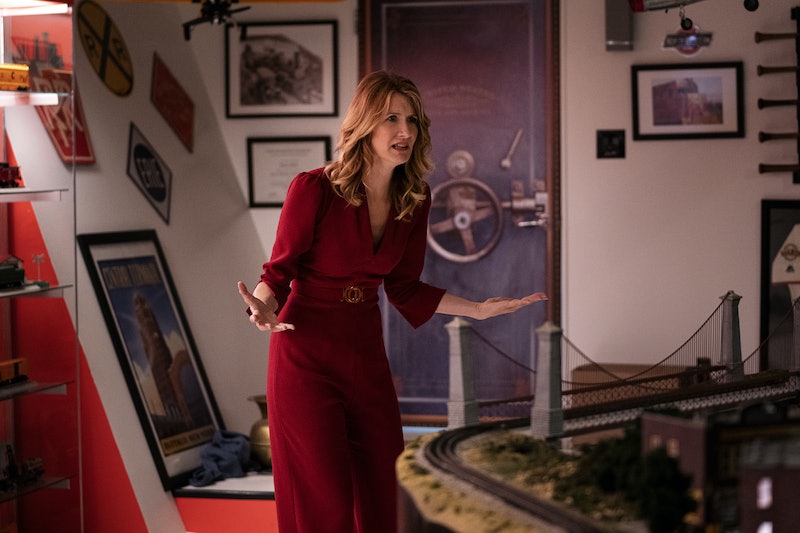 The Big Little Lies Season 2 finale aired on Sunday, July 21, and saw the Monterey Five receiving some much-needed closure, while giving viewers a satisfying conclusion to their character arcs. But how could fans not want more after Renata Klein (Laura Dern) stole the show by taking a bat to her terrible husband Gordon's (Jeffery Nordling) precious toys in a moment of sweet justice? Renata and her bat in the Big Little Lies finale were the stars of the night according to Twitter, and frankly, they both deserve Emmys for this exceptional work.

Spoiler alert for the Season 2 finale of Big Little Lies. The scene in question was particularly nasty before it got good — real good. Renata came home to the sound of Gordon's prized toy train set chugging along. Annoyed (as we all were), she walked into the room and questioned why he still has his collectors items while she had to get rid of her luxury belongings when he forced the family into bankruptcy. Her husband explained that he sold off his collectors items, but was able to keep them, provided they were kept in mint condition. The kicker? He remarked to his wife that he needed something to play with after they had to let go of the nanny he was secretly having an affair with. Then this happened.

Even though that toy collection wasn't really theirs anymore, Renata didn't hesitate. She grabbed one of his prized baseball bats off the wall and completely smashed the train set — and Gordon's stomach — to pieces, in what was perhaps the purest form of rage driven by a need for cold, hard revenge. And justifiably so. It was not only a genuine mood, but an outstanding display of Dern's acting skills, and yet another addition to the list of Renata's most iconic moments, of which there are many.

Of course, Twitter latched onto the scene, showering both Renata and Dern with praise.

Other Twitter users sympathized with Renata with the most hilarious and accurate memes.

And, perhaps, most importantly, some Twitter users compared the bat to another iconic baseball bat — the one that Beyoncé used to smash cars to smithereens in the "Hold Up" video, wearing that yellow sundress that majestically flowed like the wind. It also applied to the lyrics of "Don't Hurt Yourself," and just the whole Lemonade narrative in general, really.

And, of course, Twitter started Dern's Emmy campaign, a year early, as they should.

After what Gordon has put his family through this season, watching him finally losing something he cared about, after Renata and their daughter lost everything, was so satisfying to viewers. The scene left it vague on where their relationship is heading now, but if a third season does happen, hopefully it will see Renata leave him in the dumpster where he belongs..