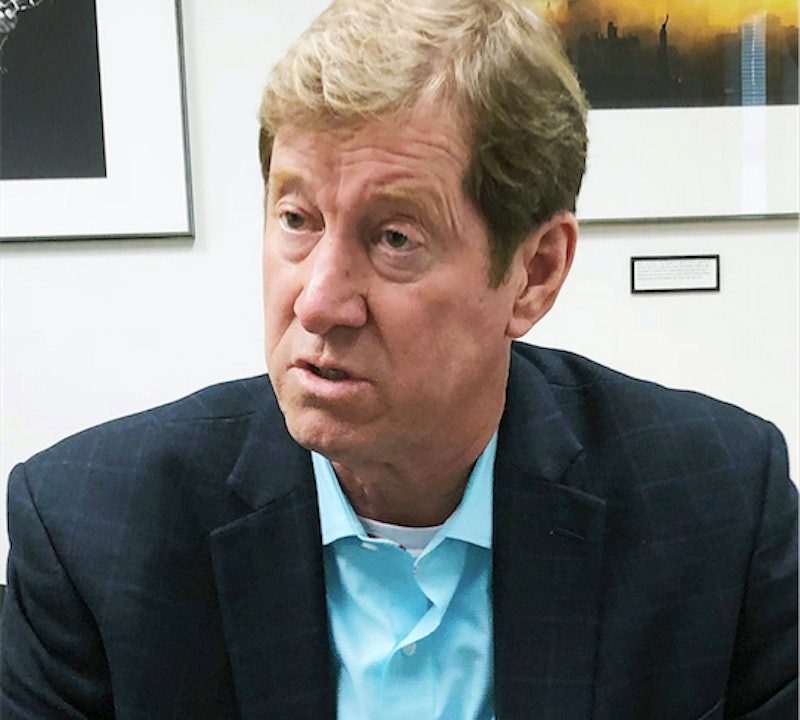 A Republican congressman running for reelection is facing backlash for the second time this year, after comments he made on his old radio show resurfaced. According to CNN's KFILE, Minnesota Rep. Jason Lewis once mocked women who described sexual harassment as traumatizing, and suggested that sexual harassment law was "ridiculous." Bustle has reached out Lewis for comment.

After conducting a review of The Jason Lewis Show, CNN reported that in 2011, Lewis questioned the impact of sexual harassment during a discussion of the sexual misconduct allegations against then-Republican presidential candidate Herman Cain. Cain denied the allegations at the time and was never criminally charged, but according to the Guardian, Cain did admit that the women who accused him of sexual harassment had received settlements.

"I don't want to be callous here, but how traumatizing was it?" Lewis said during one November 2011 broadcast. "How many women at some point in their life have a man come on to them, place their hand on their shoulder or maybe even their thigh, kiss them, and they would rather not have it happen, but is that really something that's going to be seared in your memory that you'll need therapy for?"

"You'll never get over?" Lewis added, in a voice that CNN described as mocking an emotionally distraught woman. "It was the most traumatizing experience? Come on! She wasn't raped."

Over the course of multiple broadcasts in 2011, Lewis described sexual harassment law as "insane," "out of control," and even an attempt to "distort our free speech rights."

"As you know, I was a vociferous defender of Mr. Cain during the sexual harassment allegations because I detest sexual harassment law," Lewis said at the time. "Sexual harassment law bestows in the eye of the beholder anything he or she wants it to be it. The law is wide enough to drive a semi through. It is, it is indeed just an albatross around the neck of every person in America who's got someone who doesn't like them."

Sexual harassment law wasn't the only subject Lewis disparaged on his old radio show. A CNN review published earlier this year found that Lewis also stereotyped female voters and lamented that women could no longer be described as "sluts." In a broadcast that aired in February 2012, Lewis appeared to be defending radio host Rush Limbaugh, who referred to then-Georgetown law student Sandra Fluke as "a slut" after she advocated for accessible birth control.

"Now, are we beyond those days where a woman can behave as a slut, but you can't call her a slut?" Lewis said at the time. "It used to be that women were held to a little bit of a higher standard. We required modesty from women."

CNN reportedly received a "cease and desist" letter from a law firm representing the radio network that produced Lewis' show. However, CNN nonetheless published and transcribed this audio, citing the "fair use" doctrine.

According to HuffPost, Lewis is running for reelection in Minnesota's second District, where he narrowly won his seat in the House back in 2016. CNN reported that the race between Lewis and his Democratic opponent, Angie Craig, will likely be competitive.