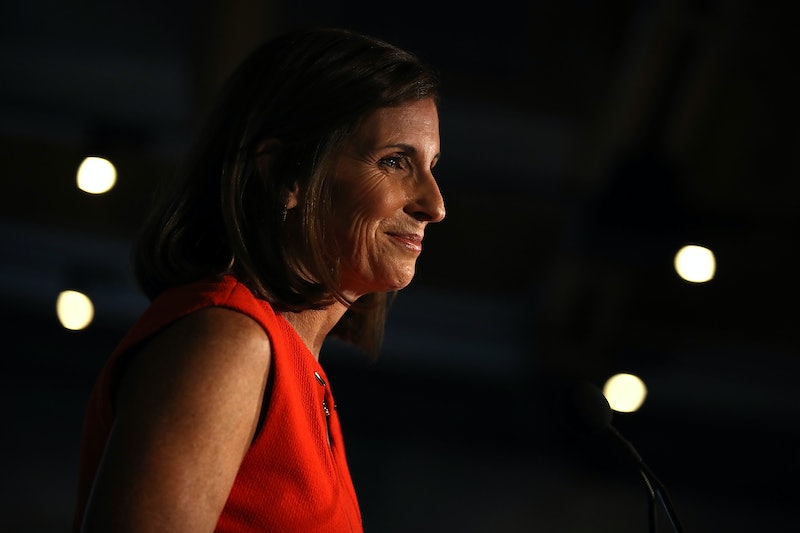 Martha McSally, the 2018 Republican candidate in Arizona's U.S. Senate race, didn't have much time to mourn her loss to Democratic opponent Kyrsten Sinema. On Tuesday morning, Arizona Gov. Doug Ducey announced that Martha McSally had been appointed to the Senate, where she will serve as former Sen. John McCain's replacement until 2020, when the seat will be subject to a vote.

The appointment doesn't come as a huge surprise, as McSally lost the race to Sinema by only 1.7 percentage points, and Senate majority leader Mitch McConnell reportedly supported her for the position, as Vox wrote. It does have one surprising consequence, though. As the Center for American Women and Politics at Rutgers wrote on Twitter, Arizona will now become the sixth state with an all-female delegation in the Senate, joining California, Minnesota, New Hampshire, Nevada, and Washington.

"With her experience and long record of service, Martha is uniquely qualified to step up and fight for Arizona’s interests in the U.S. Senate," Ducey said in a statement to The Arizona Republic. "I thank her for taking on this significant responsibility and look forward to working with her and Senator-Elect Sinema to get positive things done.”

McSally told The Arizona Republic that she's "humbled and grateful to have this opportunity to serve and be a voice for all Arizonans." She added, "I look forward to working with Senator-Elect Kyrsten Sinema and getting to work from day one."

Arizona's regulations about Senate replacements mean that McCain's former seat will come up for a vote in both 2020 and 2022, when McCain's term actually would have ended, according to CNBC. That special election in 2020, as CNBC wrote, offers Democrats what they believe is one of their best chances to pick up a Republican-controlled seat in the next election.

McSally has a long and distinguished record in the military, and she entered the midterm race already serving as an Arizona representative in the House. As The Arizona Republic explained, though, there are still numerous factors that could make McSally an unpopular choice in 2020 despite the fact that she came so close to winning in 2018.

She made some enemies on the right when she was seen to have snubbed McCain, a misstep which she later apologized to John's widow, Cindy McCain, for. Her stance on President Donald Trump also hasn't been entirely constant, as The Washington Post reports. While she initially positioned herself as one of Trump's Republican critics, that changed when she ran for the Senate and began publicly supporting him.

As The Arizona Republic's editorial board wrote in a piece endorsing Sinema, McSally has voted with Trump 97 percent of the time from her position in the House. She also takes a fairly hardline position on abortion; The Arizona Republic reported during the primary that McSally said she was pro-life and only supported allowing abortion in cases of rape, incest, or when the mother's life was in danger.

Now, McSally will have almost two years to make her case to Arizona's citizens before a potential bid for reelection in 2020.