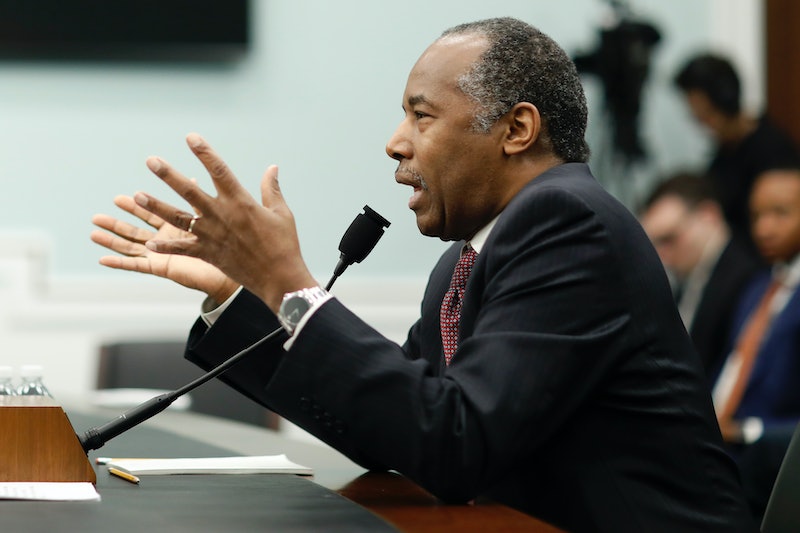 Trump's Housing and Urban Development secretary did indeed mistake a real estate term for a cookie during a Tuesday hearing, but that's not the only comment that caught people's attention. At one point, New York Democratic Rep. Nydia Velazquez called Ben Carson out for "mansplaining" how logic and emotion work after she grilled him about his housing policies.

On Tuesday, Velazquez spoke about housing issues in America and said that Carson's proposal didn't address how millions nationwide needed housing assistance. "We need to have a national conversation about homelessness in our nation, about the disrepair about this nation," the New York Democrat said. "You know what it takes? It takes money. It takes the budget. You have created this crisis by the disinvestment that has taken place in public housing in our nation."

Because Rep. Velazquez's time was up, Carson could not respond to her directly, ABC News noted. However, Florida Republican Rep. Bill Posey said that he would let the housing secretary respond to Velazquez on Posey's time. After the congresswoman's time ran out, Carson suggested lawmakers think "logically" rather than "just emotionally." He said:

We have to analyze these things carefully, we have to use our brains. We have to think logically rather than just emotionally if we’re going to solve these problems. And they can be solved if we work together, rather than making everything into a political platform and trying to score points.

Velazquez turned to Twitter and said, "Thanks for mansplaining, Mr. Secretary, but what's NOT logical is cutting housing budget and then saying there's a housing shortage!"

Velazquez was criticizing Carson's proposal to slash 16.4% of funding for the Housing and Urban Development budget. Analysts have openly cautioned that such a steep cut to the budget could hurt public housing and the millions of people who rely on it in America.

In March, the president of the National Low Income Housing Coalition, Diane Yentel, slammed Carson's proposal for its potential to cause numerous evictions across the country. In an official statement, according to Curbed, Yentel said that Trump and Carson were "making clear in no uncertain terms their willingness to increase evictions and homelessness — for the vulnerable seniors, people with disabilities, and families with kids who will be unable to manage having to spend more of their very limited incomes to cover rent hikes."

It's that proposal from Carson that Velazquez called "shameful" and "immoral" during the Tuesday hearing. "It fails American citizens just for the sake of scoring political points," the New York Democrat said.

Verbal slip-ups and gaffes are fairly common on Capitol Hill, but they seemed to make up the larger theme of Carson's appearance on Tuesday. As previously mentioned, Carson mixed up a real estate term about foreclosure properties with Oreo, the cookie. He also defended the Trump administration's proposal to evict undocumented immigrants and their American citizen children from government-subsidized housing, The Washington Post reported.

All in all, Carson seemed to have received considerable criticism for his appearance in front of the House Financial Services Committee, whose chair is California Democratic Rep. Maxine Waters. While addressing Carson, Waters called his budget cut proposal an "outrageous plan" and said that the proposed eviction of undocumented people from subsidized housing was a "cruel proposal."