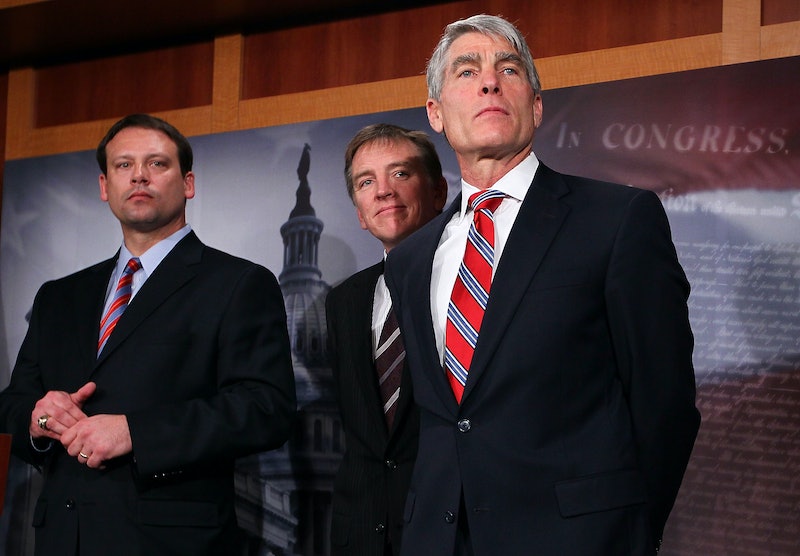 In response to fellow members of Congress inviting undocumented immigrants to this year's State of the Union, Rep. Paul Gosar wants Dreamers arrested if they attend the address. “Of all the places where the Rule of Law needs to be enforced, it should be in the hallowed halls of Congress," Gosar tweeted Tuesday. The Republican from Arizona said that he'd contacted U.S. Capitol Police and asked that they check State of the Union attendees' identification and arrest anyone without documentation, as well as anyone using fake identification to get through security.

"Any illegal aliens attempting to go through security, under any pretext of invitation or otherwise, should be arrested and deported," he tweeted. In protest of President Donald Trump's immigration agenda, which includes eliminating the Deferred Action for Childhood Arrivals (DACA) program, at least 24 Democrats invited undocumented people brought to the U.S. as children to sit alongside them during Tuesday's address.

One Republican congressman — Rep. Carlos Curbelo (R-FL) — is also planning on bringing a DACA recipient to Trump's speech. Curbelo tweeted last week that he looks forward to "working w/ colleagues from both sides of the aisle to make sure Congress fully recognizes #Dreamers."

Gosar, on the other hand, agrees with Trump that America needs to secure its southern border. His website claims there is an “immigration crisis in the United States.” His site's immigration page reads: “The federal government’s failure to enforce the Rule of Law and secure the border are some of the most pressing national security risks facing our country.” It goes on to criticize the Obama administration’s “unwillingness to uphold the laws of this land” surrounding immigration.

Since Trump put the responsibility of reinstating DACA on Congress last year, Gosar has remained adamantly opposed. His arguments have not always been factual, though. Earlier this month, Gosar posted statistics about the percentage of serious crimes "DACA-aged illegals" commit in his home state. The author of the report Gosar cited, Crime Prevention Research Center president John R. Lott Jr., subsequently told AZCentral the congressman misstated some of the statistics from his report.

While the fate of DACA remains undecided in Congress, roughly 122 Dreamers lose their protection from deportation each day, according to analysis from the Center for American Progress. Because Dreamers' DACA protections expire at different times, it would be impossible for Gosar (or Capitol Hill police) to know the status of Dreamers attending the SOTU without checking their individual DACA protections.

So, Gosar calling for security to arrest and deport anyone without adequate identification overlooks the fact that most of the Dreamers in attendance will likely still have their DACA protection — at least for the time being. While it is possible that some have already lost DACA, the police have given no indication that they plan to deport Dreamers trying to attend the SOTU.

Nevertheless, Gosar doubled down on his position all afternoon, also tweeting a photo of himself on the phone with the caption, "We’ve got a lot of constituents calling our office in support of my #SOTU statement."

Members of Congress from both parties called out Gosar's extreme request on Twitter, including Rep. Joe Crowley (D-NY), who responded by asking his colleague: "What’s wrong with you?" Sen. Jeff Flake (R-AZ) tweeted back at Gosar: "This is why we can’t have nice things..."

Gosar wasn't fazed, however. He responded to Flake with a quip of his own: "This is why you got forced out of office."