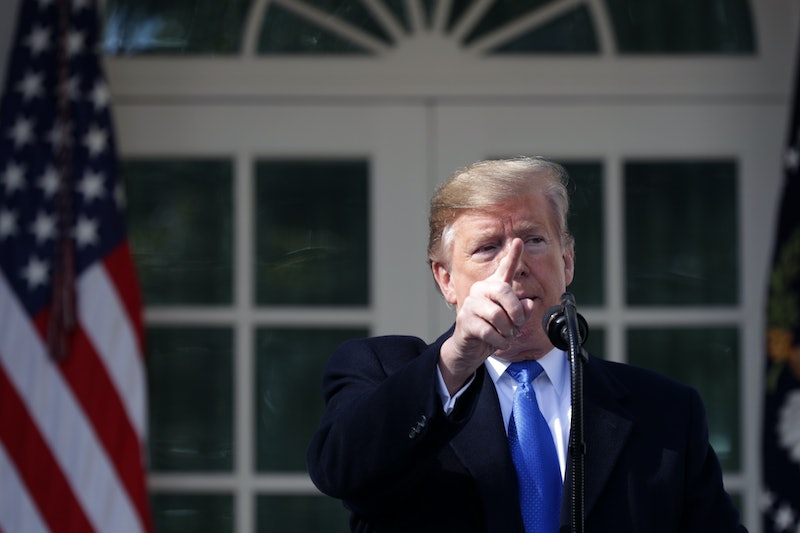 On Friday, President Trump announced at a press conference that he'll declare a national emergency on the southern border in order to fund a U.S.-Mexico border wall. Although the president made many unsubstantiated claims throughout his press conference, the reporters present who fact-checked Trump's national emergency claims faced an uphill battle, as Trump repeatedly stymied and interrupted their comments from behind the podium.

On paper, it shouldn't have been difficult to debunk the factual inaccuracies in Trump's address, as many of them were objectively false in fairly clear-cut ways. To take just one example, Trump claimed at the presser that Barack Obama "put on more debt on this country than every president in the history of our country combined." This isn't anywhere close to true; the debt grew by $8.5 trillion under Obama, which is less than $11.6 billion in debt the U.S. had at the end of George W. Bush's term.

But fact-checking Trump in print is much different than doing so in person, as the reporters at Friday's event quickly discovered. Although many of them did attempt to point out the president's falsehoods, Trump regularly railroaded and cut them off, making it difficult for their points to sink in.

For instance, CNN reporter Jim Acosta confronted Trump on his characterizations of what's actually happening at the southern border, specifically that there's an "invasion of our country" that constitutes a national emergency.

"That's because of us," Trump interrupted.

But it's not. Border apprehensions hit a high in 2000, then began falling drastically and have remained relatively constant since the mid-2000s, government data shows. Moreover, border apprehensions rose substantially during 2018, when Trump was in office, and so there's no sense in which the historically-low levels of border apprehensions is due to his administration's policies.

In a subsequent back-and-forth with Trump, Acosta noted that, according to several studies, undocumented immigrants commit crimes at lower rates than native-born Americans. Trump's response was not to engage with that data point, but rather to question Acosta's integrity in asking the question.

There's no reason to doubt "that stat," though, and there's no reason to suggest that Acosta secretly doubts it, either. Likewise, Trump implied that some fact about federal prisons debunks the statistic Acosta referenced, but didn't say anything about what that fact is, or why it might disprove studies about crime rates.

"Ask the 'angel moms,' what do you think?," Trump said, referring to parents of Americans killed by undocumented immigrants. "Ask these incredible women who lost their daughters and their sons, OK? Because your question is a very political question, because you have an agenda, you're CNN, you're fake news, you have an agenda."

Trump went on to say that "the numbers that you gave are wrong," though he presented no evidence to prove that, and accused Acosta of asking "a fake question," and then called on another reporter before he could respond.

But reporters can still fact-check Trump in articles — and after his presser on Friday, that's exactly what many of them did.