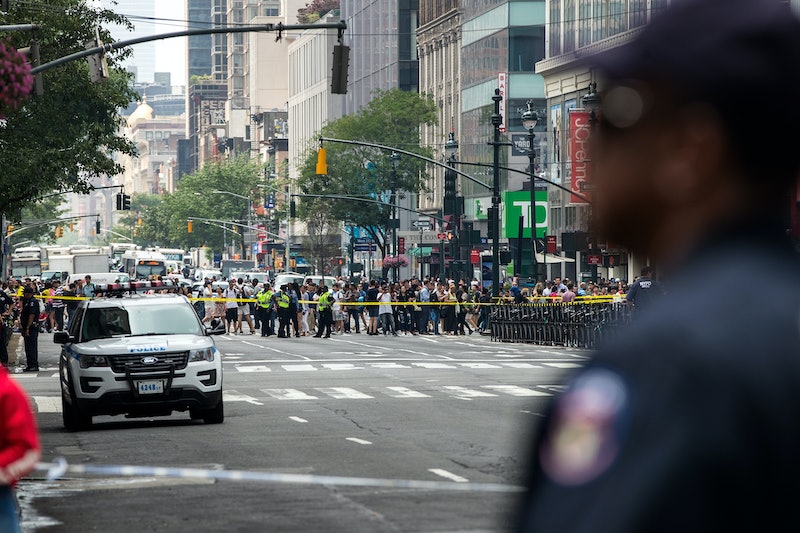 On Thursday afternoon, there were dozens of bomb threats reported across the country that were linked to emails demanding bitcoin, according to numerous reports. However, the NYPD said on Twitter that the threats appear "meant to cause disruption and/or obtain money," and are "likely NOT CREDIBLE." Here's what we know so far about Thursday's bomb threats.

According to NBC News and various local media, bomb threats were sent to news agencies, government buildings, schools, hospitals, libraries, banks, and various other places around the country, some of which have been evacuated. There have been no reports of explosions or injuries as of this writing, however, and the NYPD tweeted that the searches it has conducted thus far have found "NO DEVICES" in the buildings mentioned in the threats.

In a report similar to many others, four business in Cedar Rapids, Iowa, received bomb threats in the form of an email, according to KCRG, which demanded a $20,000 bitcoin payment in return for defusing the supposed "explosive device." The Cedar Rapids Police Department said on Twitter that it has found "no credible evidence any of these emails are authentic."

"My man hid an explosive device (Hexogen) in the building where your business is conducted," the email to Cedar Rapids businesses read, according to KCRG. "I can call off my man if you make a transfer. 20.000 dollars is the cost for your life and business. Pay it to me in BTC and I warrant that I will withdraw my man and the device won't detonate." It adds, "We are not terrorists and don't assume any liability for explosions in other places."

The FBI acknowledged the bomb threats in a statement, according to FOX 59 and many other local news outlets.

“We are aware of the recent bomb threats made in cities around the country, and we remain in touch with our law enforcement partners to provide assistance," the FBI's statement read, according to KKTV. "As always, we encourage the public to remain vigilant and to promptly report suspicious activities which could represent a threat to public safety.”

In addition to the many places that received email threats, Columbine High School got a bomb threat by phone on Thursday, according to 9News. The Jefferson County Sheriff's Office said that the caller claimed to have multiple explosive devices inside the building, and also said that they were outside the school. In response, Columbine High and 22 other schools in the area were placed on lockdown, according to 9News, but that has since been lifted.

Over in New York, the Bronx High School of Science also received a phoned-in bomb threat on Thursday, ABC News reports. That caller claimed a pipe bomb in the school would explode in 20 minutes, but police cleared the building and determined that there was no threat.

It's unclear whether those two incidents were connected to the emailed bomb threats.