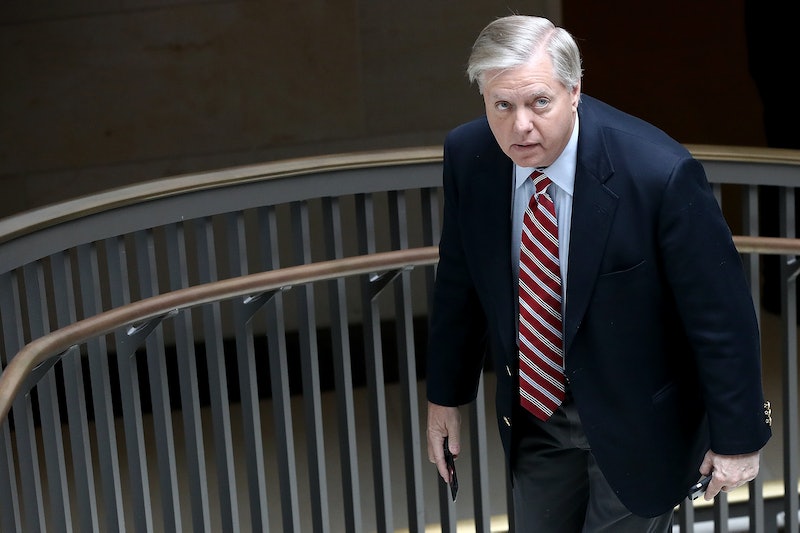 On Sunday, Sen. Lindsey Graham argued that we shouldn't worry too much about whether the Trump administration has colluded with Russia, because President Trump is too incompetent to collude with Russia. Graham is only the most recent Republican to imply that, because Trump is an inept politician, he therefore couldn't have committed any serious crimes before or after taking office. It's a laughable and absurd argument, but it's become sadly common among Trump's defenders these days.

"[Trump] can't collude with his own government," Graham quipped. "Why do you think he's colluding with the Russians?"

With the first sentence, Graham is referring to Trump's habit of contradicting his own cabinet members, sending tweets that undermine his own legal team and generally crippling his own ability to govern. This is all relevant stuff — but by no means does it exonerate Trump from charges of collusion, which he has denied. The fact that a president is incompetent doesn't mean they couldn't possibly have obstructed justice. What Graham did here is make a pithy joke ("can't collude with his own government"), and then try to pass that joke off as a legitimate defense of the president.

But it's not a legitimate defense. It's entirely possible that Trump simultaneously a) doesn't know what he's doing, and b) has committed wrongdoing with regard to Russia, or any number of other things. Unfortunately, Graham is not the first Republican to insist otherwise.

On Thursday, Speaker of the House Paul Ryan also deployed the "go easy on Trump, he doesn't understand how this works" defense. The subject was former FBI Director James Comey's Senate testimony, in which he expressed serious concern over the overtures he'd received from Trump. “The president is new at this,” Ryan explained. “He’s new to government. And so he probably wasn’t steeped into the long going protocols that established the relationships between DOJ, FBI, and White Houses.”

Sen. Marco Rubio made a similar argument. "My hope is that there are people in the White House that advise the president about what's appropriate and what isn't when you're interacting with the FBI," Rubio said in response to Comey's testimony. "It's not clear why that didn't happen sooner, and it was a disservice to the president."

All of these defenses have one thing in common: an obstinate refusal to hold Trump responsible for the things that Trump himself has allegedly done. It's telling that neither Ryan or Rubio denied or disputed any of Comey's allegations; they simply said that the American people should hold Trump to a lower standard of blame, because he's new to this whole politics thing.

That's nonsense, because regardless of his experience or inexperience, Trump is responsible for his actions. When Republicans give the president of the United States extra leeway to behave inappropriately because he's "new" to this, they are doing an incredible disservice to the country. Graham, Rubio and Ryan are effectively denying that there's an the objective standard by which all public officials must be judged — perhaps because they know that, by any rational assessment, Trump falls far short of that standard.