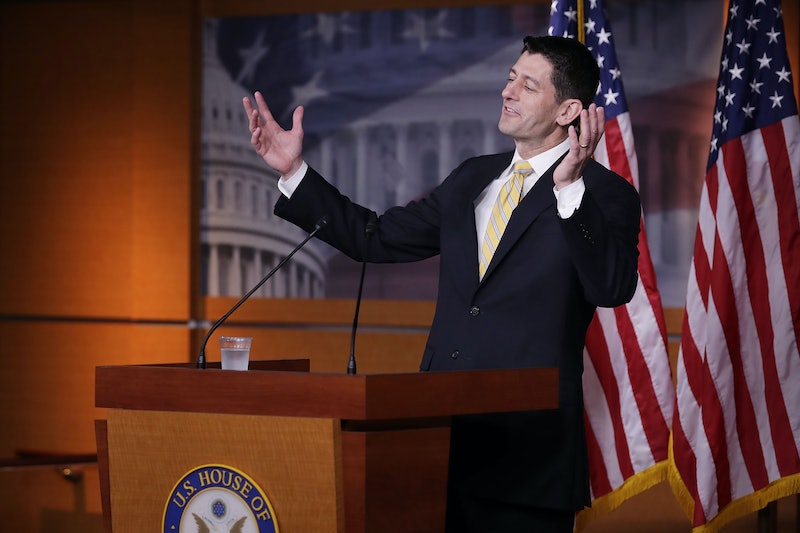 The bill that will not die has returned from the grave once again: Republicans want another vote on Obamacare repeal, POLITICO reported Friday. Members of the conservative House Freedom Caucus are collecting signatures from members to force House Speaker Paul Ryan to bring a "clean" repeal bill — one that would completely scrap the entirety of the Affordable Care Act — and if that petition gets 218 signatures, Ryan will be forced to bring yet another Obamacare repeal bill to the floor.

Of course, the underlying dynamics of Obamacare repeal remain exactly as they've always been: There aren't enough votes in the Senate to pass it, and a bill can't become law if the Senate doesn't pass it. Nothing about that has changed, despite the new effort in the House. In fact, the Republican-held Congress has attempted to repeal Obamacare no fewer than four times this year alone, and it has failed every time.

The first such failure came in March. House Republicans were preparing to vote on the American Health Care Act, legislation that would partially scrap the Affordable Care Act, but Ryan was forced to cancel that vote minutes before it was scheduled to take place after it became clear that it didn't have enough support to pass.

In May, the House was able to pass a more limited form of Obamacare repeal. The Senate (or rather, an all-male group of 13 Republican senators) then got to work writing its own version of the bill. After almost two months of work, however, Senate Majority Leader Mitch McConnell canceled a vote on the new bill due to lack of support amongst Republican senators.

Two weeks after that, Senate Republicans unveiled yet another version of the legislation, called the Better Care Reconciliation Act. That bill would have gutted the Affordable Care Act while retaining some of the law's more popular provisions, including some of of its taxes on the wealthy. And yet this effort collapsed on July 17th after four Republican Senators announced they'd vote against it.

The next day, McConnell announced that he'd simply put a clean repeal bill (like the one currently being pushed in the House) up for a vote, and hope for the best. That plan died before the end of the day, with three moderate Republican Senators declaring their opposition to clean repeal.

Finally, McConnell simply scheduled a "vote-o-rama" on just about every form of Obamacare repeal that had been considered to that point, as well as one that hadn't: A so-called "skinny repeal" bill, which would repeal only the law's individual and employer mandates. But skinny repeal failed by one vote, and none of the other versions — including clean repeal — came anywhere close to passing.

Republicans are, of course, free to make another go at repealing President Obama's signature legislative accomplishment. But it's never worked in the past, and there's no reason to think it will work this time.