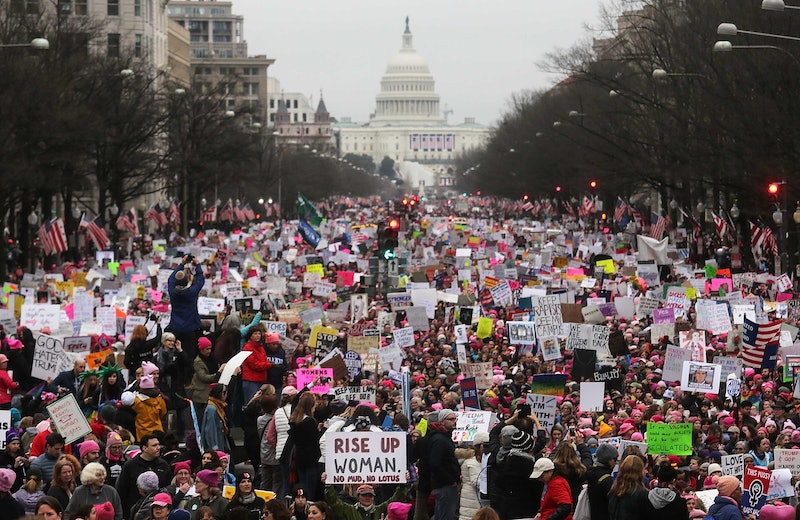 It's only been a week and a half since Donald Trump took office, and the nation is already in an uproar, with numerous protests occurring across the country and around the world. Now, there's a new way for figuring out how to find protests near you: Called RESISTABLE, it's a TinyLetter newsletter that lists upcoming protests taking place in the United States, available only to subscribers who sign up to receive it. "I want people to see that we're not just rolling over and letting the new administration do whatever it wants, whenever it wants," Marisa Kabas, creator of the newsletter, tells Bustle. "So many of us — myself included — sat on the sidelines for far too long, and allowed elected officials to just handle our business."

Kabas got the idea of making the RESISTABLE newsletter using TinyLetter, an email subscription service, after attending the Women's March in Washington, D.C., where nearly 500,000 marchers (that's half a million people!) showed up to protest against Trump, his new administration, and his policies. "Seeing people of all ages, religions, gender identifications and sexual orientations come together to fight a common evil made me realize we have an incredible advantage: strength in numbers," Kabas says. "I knew it was imperative to keep the momentum going by creating awareness about upcoming protests, and it didn't seem like there was a central resource for finding this type of info. So, I decided to make one myself."

Ever since Kabas launched RESISTABLE on Jan. 27, she's sent out email newsletters regularly with updates on local protests happening all over the country. Although she plans to send out emails on an "as-needed" basis, so far that's meant every day, largely due to the sheer number of protests opposing Trump's most recent executive order to temporarily ban immigrants (including green card holders) from seven countries with predominantly Muslim populations.

So far, nearly 1,600 people have subscribed to RESISTABLE and countless others have shared a link to the TinyLetter via social media, according to Kabas. Often, she will receive recommendations from acquaintances and strangers alike about imminent protests to add to the newsletter. "I think it's a testament to how eager people are to not just speak up, but show up for their fellow citizens," she says.

When you go to sign up for the newsletter, here's what you'll see:

All you have to do is a type your email into the text box and hit "subscribe," then verify your email address by clicking on a link that will be mailed to you from TinyLetter. If you're curious about what a typical newsletter looks like, you can check out an archive of RESISTABLE TinyLetters that have previously been sent out.

There are two sections: one for upcoming gatherings, and one for protests that will take place later in the future. Upcoming gatherings include details about the organizers, the mission, and a link for getting involved; they're also organized by date and time. Future protests are listed at the bottom and categorized based on state. If you want to only focus on protests happening in your area, simply search for your state.

Here's a sneak peek of what a typical newsletter looks like and what to expect if you decide to subscribe:

"Since the election, I've had this really overwhelming feeling of powerlessness. The election results just felt like some horrible injustice had been done towards our country, and in a flash, all the values I hold dear were threatened," says Kabas, a writer based in New York City, where hundreds of demonstrators gathered at John F. Kennedy International Airport to support the people who were being detained (and were nearly deported) as a result of Trump's executive order.

Protests in large numbers and peaceful assembly are essential to a healthy democracy, Kabas says, because individuals can collectively make a difference (not to mention, the right to gather and protest the government is protected by the United States Constitution under the First Amendment). "If anything, this election was a giant wake-up call for Americans to be critical of government," Kabas says. "I hope RESISTABLE will serve as, perhaps not a daily wake-up call, but a little nudge to keep fighting."

More like this
Charlene White & MPs Lead Tributes For Bristol Bus Boycott Organiser Roy Hackett
By Sam Ramsden
Christina Aguilera Took A Powerful Stand At Brighton Pride
By Sam Ramsden
Dunkin’s Pumpkin Spice Latte Is Officially Back This Week
By Mia Mercado
Your Daily Horoscope For August 16, 2022
By Alexandria Lettman
Get Even More From Bustle — Sign Up For The Newsletter