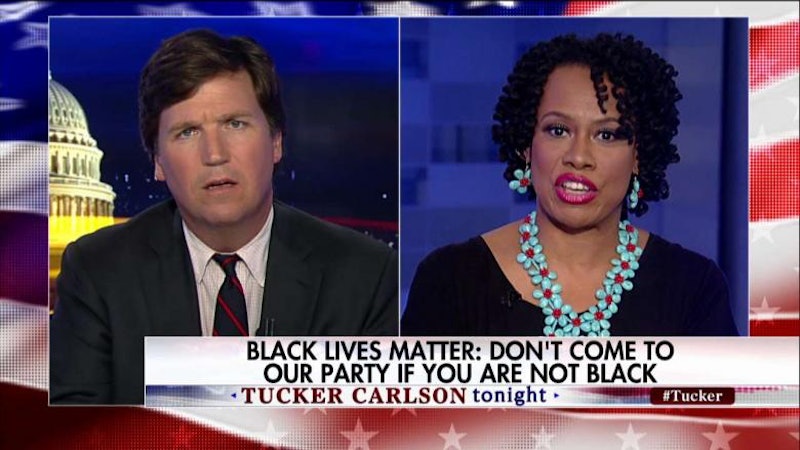 You've heard the word before. "Reverse racism" — an awkward construction of two words that became a term, sandwiched between the history we are unwilling to acknowledge in the United States and the reality we're still denying today; in case you're wondering, that reality is privilege, and that some of us don't have it the same. And when this term is uttered in an attempt to equalize our struggle with race, the conversation gets further and further away from where it should be. In the case of Lisa Durden, a black college professor was fired for defending a Black Lives Matter event during a Fox News appearance, we see how this term can be used to deflect from the real conversation. (Bustle has reached out to Essex County College for comment, and will update this post upon response.)

Durden was an adjunct professor at Essex County College who appeared on talk show Tucker Carlson Tonight. After a few comments Durden made during a heated debate about a Memorial Day celebration hosted by a Black Lives Matter group, specifically for black people, her responses became the focus of why reverse racism is wrong.

Durden touched on white privilege, representation, and safe spaces for black people's identities to be affirmed and celebrated in a two minute video posted by Carlson on Twitter:

Going back to Durden's statements, Carlson called her response "separatist" and "hostile" when she noted that creating spaces for black people isn't about singling out people based on their race — it's more about being a minority in a country and still experiencing social inequality that is seen in the struggle to address police brutality, the disproportionate incarceration of black people, and even things like being targeted for wearing natural hair. These issues that continue to make news coverage illustrate how being black or wanting to create safe spaces for black people can affect the quality or value placed on your life — and for Durden, it appears to have cost her job.

The college President Dr. Anthony Munroe, a black man, shared the following statement about why they decided to suspend, and eventually fire Lisa Durden:

"The college was immediately inundated with feedback from students, faculty and prospective students and their families expressing frustration, concern and even fear that the views expressed by a college employee (with influence over students) would negatively impact their experience on the campus."

But the president also mentions the college's values and affirms why the idea of "reverse racism" is toxic way to approach conversations about race.

"I fully believe that institutions of higher learning must provide a safe space for students to explore, discuss and debate, not only academic philosophies, but the harder issues related to living harmoniously and growing together in our communities and as a country. As the Rev. Dr. Martin Luther King wrote, “The function of education is to teach one to think intensively and to think critically. Intelligence plus character — that is the goal of true education.” The character of this institution mandates that we embrace diversity, inclusion, and unity. Racism cannot be fought with more racism."

This statement not only sets the conversation back about race, but does it in a way that places blame on a black woman for challenging how privilege actually works. Everyone has privilege, but Durden was talking about white privilege; it's a privilege that gives non-POC the ability to make more money than their counterparts, live in neighborhoods where you feel safe enough to call the police, acquire employment without racial bias, to have their humanity affirmed when they make mistakes ... and the list goes on!

Racism is about power. Yes, it is defined as discrimination based on race, but in the United States, racism is used to disadvantage anyone who isn't white. And yes, that includes Dr. Munroe, even if he doesn't acknowledge it in that statement. To skip over hundreds of years of subjugation is insisting that we live in a post-racial society or that it can be created on a college campus.

But instead of talking about the many ways in which, black people are disenfranchised, the conversation turns into what white people were not invited to. Instead of talking about the real purpose of Black Lives Matter — which addresses discrimination against black people — the conversation devolves into comparing the liberation of black people to one instance that won't take any privileges away from white people. You see, it doesn't work in the reverse. Ignorance certainly can, but racism is not only an attitude but actions that can endanger people's lives and their families. Philando Castile, Rekia Boyd, and Sandra Bland and their families are the many examples of what's at stake.

And there aren't very many of those safe spaces for black people. For black people, certain things you would assume are safe spaces for everyone are sometimes the complete opposite; your job where you are the only minority, your car where you are most likely to be stopped if you're black, and even at home. If inclusion and unity is about ignoring how people are different, we also silence people.

So whether or not you agree with Durden, who said, "Boo-hoo, you white people are angry because you couldn't use your 'white privilege' card to get invited to the Black Lives Matter all-black Memorial Day celebration," the sentiment here is about space. And when you insist that spaces for black people is "reverse racism," we blame people who experience oppression instead of uplifting their healing, their voices, and the few times they feel normal and accepted.