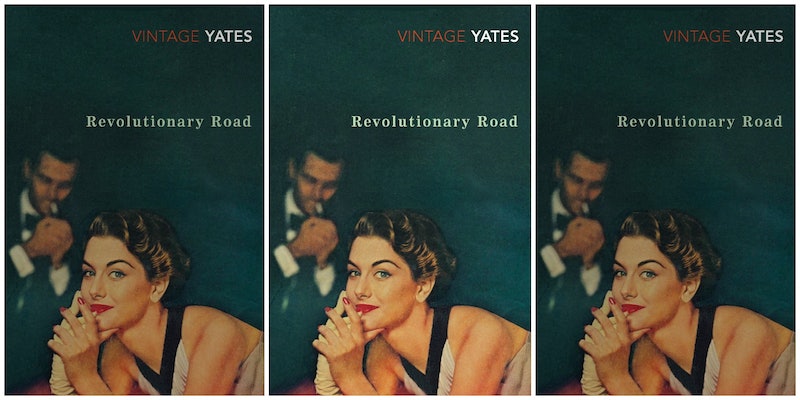 As a lifelong book worm, I have cried over an untold number of novel scenes, but they all pale in comparison to my experience reading Richard Yates' Revolutionary Road. To this day, that book is the only one I have ever read that caused me to have a panic attack. Having loved the film adaptation starring Leonardo DiCaprio and Kate Winslet, I thought the book would bring me the same slurry of emotions.

When we talk about "difficult" books, we are very often talking about books whose grammar, syntax, and plot challenge us to keep up with their twists and turns. Other, less talked-about books are psychologically difficult. These titles require an emotional effort from readers who wish to power through them. They are not bad books, but they can trip a domino effect of emotions in the reader.

None of us comes to a book as a blank slate, and no two people will read the same book in the same way. We all bring our own identities and experiences to the words we read. Until I read Revolutionary Road, my identity and experience had never caused me to have a negative reaction to a novel.

I understand that my utter lack of negative reader responses prior to Revolutionary Road speaks volumes about my privilege as a white, cisgender woman, so please understand that I am not complaining about Yates' novel or my experience with it. I don't believe the book should be censored or carry a content warning. Reading Revolutionary Road did give me a panic attack, however, and I want to share that story with other people.

For those of you who have never seen or read Revolutionary Road before, here's a brief primer: Frank and April Wheeler are a gorgeous, young couple living with their two children in the suburbs in the mid-1950s. They might never have married one another if April had not turned up pregnant with their first child, but now they're doing the best they can with what they have, which is... not much at all. Frank believes he's better than his office job, which he finds stifling and unfulfilling, and April wants to be something — anything — more than a wife and mother. The Wheelers hatch a plan to move to France, where April can support them on a clerical worker's salary while Frank finds his passion, but their relationship devolves quickly into explosive arguments every time something doesn't go according to plan.

Frank and April are passionate, volatile people who don't quite fit into the mid-century model of an American family. April doesn't want more children, and there's evidence to suggest that neither of the adult Wheelers really, truly wanted the two kids they have. Living 10 years before oral contraceptives became legal for married couples in the U.S., and unable to find their way to an amicable divorce, Frank and April attempt to tough it out, even though their relationship is frequently abusive — physically, verbally, and emotionally.

Frank and April have their first fight early in the novel, just after she takes part in a failed performance with a local amateur theatre troupe. Frank takes offense at April's sour attitude on the car ride home, and she eventually leaps out of the vehicle and runs away to avoid the fight. Yates describes their argument:

"Then the fight went out of control. It quivered their arms and legs and wrenched their faces into shapes of hatred, it urged them harder and deeper into each other's weakest points, showing them cunning ways around each other's strongholds and quick chances to switch tactics, feint, and strike again. In the space of a gasp for breath it sent their memories racing back over the years for old weapons to rip the scabs off old wounds; it went on and on."

Later, after April discovers she is pregnant with a third child, and Frank shoots down her suggestion of self-termination, this gem of a conversation takes place:

"[T]he fight with April was now another day in the past, [and so] he went into the kitchen and took hold of both her elbows as she bent over a sinkful of suds.

'Listen,' he whispered. 'I don't care who's right or who's wrong or what this whole damn thing is all about. Couldn't we just cut it out and start acting like human beings for a change?'"

'Don't you see how unfair you're being? What do you want from me?'

Watching Kate and Leo yell it out on screen never bothered me, not even in the wake of a turbulent separation — the screaming, the crying, the name-calling, the things almost thrown and things almost broken. But reading Revolutionary Road was a different experience entirely, and one for which I was not prepared.

In a way, I almost believe that the film adaptation of Revolutionary Road, while every bit as brutal as Yates' novel, allows viewers to separate themselves from the action on the screen. When you watch Revolutionary Road, you watch Winslet and DiCaprio speed toward disaster. When you read the source novel, however, Yates' characters are like mannequins: waiting for you to come along and put your own face onto them.

Reading back on these quotes today, there's nothing particularly shocking or upsetting about them, for me. At the time, though, I had been separated for more than a year, but I was not yet officially divorced, and the upsetting memories of my relationship with my ex were still very raw. April's practiced coolness, her reluctance to let Frank touch her, and the cutting words she hurled at her husband made me feel like the unhappy woman and wife I had been. Frank's ghostlighting of April, his violence toward objects instead of his wife, and his constant derailing of her concerns took me right back into the bad relationship I thought I had left in the past.

My chest tightened, my breathing grew ragged, and Frank and April Wheeler morphed from DiCaprio and Winslet's unnaturally attractive visages into the lumpy, dumpy ones of my ex and myself. It wasn't P.T.S.D., or at least I don't believe it was, but it was the closest thing to it that I ever want to experience. No book had ever made me feel so exposed, vulnerable, and endangered. I put down my copy of Revolutionary Road. I still haven't picked it back up.