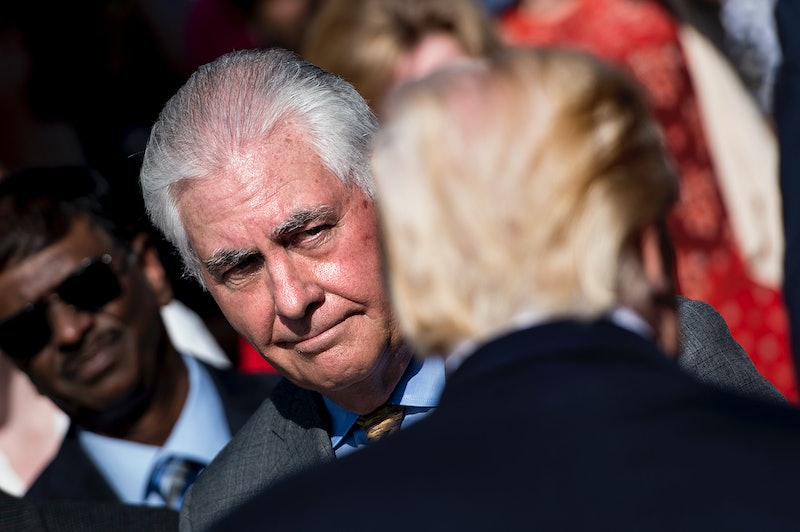 President Trump gave a speech at the Boy Scouts' jamboree back in July, an event at which past presidents have often offered cheerful and apolitical advice. But Trump made blatantly disparaging remarks about Hillary Clinton and President Obama, and waxed on at length about his campaign and the D.C. "cesspool." Apparently for Secretary of State Rex Tillerson, that was almost the last straw. Just days before the speech, Tillerson reportedly called Trump a "moron" and threatened to resign after hearing the president's remarks to the Boy Scouts, perhaps no surprise considering it's an organization Tillerson once led himself.

Three officials "familiar with the incident" told NBC News that Tillerson's original "moron" comment about the president came after a July 20 meeting at the Pentagon. Several administration officials confirmed that the strained relationship between Tillerson and Trump reached a near breaking point after the president's July 24 speech to the Boy Scouts.

Intervention from Vice President Mike Pence reportedly may have saved the administration from the embarrassment and bureaucratic nightmare of losing another senior official during a summer of staff shakeups. Had Tillerson resigned, he would hardly have been the first high profile White House appointee leaving in short succession.

Back in July, just six months into Trump's presidency, a slew of staff had already come and gone. His original pick for National Security Adviser, Gen. Michael Flynn, resigned after leaks unveiled his contact with a Russian diplomat that he allegedly lied about to the vice president. Flynn had been on the job less than a month. Then in May, Trump abruptly fired former FBI Director James Comey, citing his handling of the investigation into Hillary Clinton's private email server. Elon Musk resigned from Trump's economic advisory council on June 1. Sean Spicer resigned as press secretary on July 21, followed out the door just a week later by former chief of staff Reince Priebus. Administration staff seemed to come and go like a game of musical chairs.

Though it's unclear if Pence knew that Tillerson had resignation on his mind, the vice president nevertheless brought the secretary of state around. Pence reportedly counseled Tillerson on how to manage his interactions with the president, a kind of tutorial on best practices in keeping up good White House rapport. One White House official told NBC News that Pence advised Tillerson to keep his disagreements with Trump strictly private, and that the whole intervention has resulted in "progress."

Trump recently tweeted what appears to be a direct undercut of Tillerson, saying the secretary of state is "wasting his time" with efforts to find a diplomatic solution to growing tension with North Korea.

For his part, Tillerson felt the need to clarify his side of the story. At a press conference held Wednesday morning, Tillerson vehemently denied that he had ever considered quitting the state department. He said Pence did not need to persuade him to stay, since "I have never considered leaving this post."

Notably, Tillerson did not deny that he had called Trump a "moron" when asked by a reporter about that comment. Instead, Tillerson responded, "I'm not gonna deal with petty stuff like that. This is what I don't understand about Washington... the places I come from, we don't deal with that kind of petty nonsense."

"He's smart. He demands results wherever he goes," Tillerson said of the president. He said he thought the most important part to address from the "misreported" stories surrounding his supposedly strained relationship with Trump was the erroneous implication he had considered resigning.

This is hardly the first time a White House official has disputed media reports, and it certainly won't be the last. How Tillerson and Trump manage their working relationship from here on out remains to be seen.