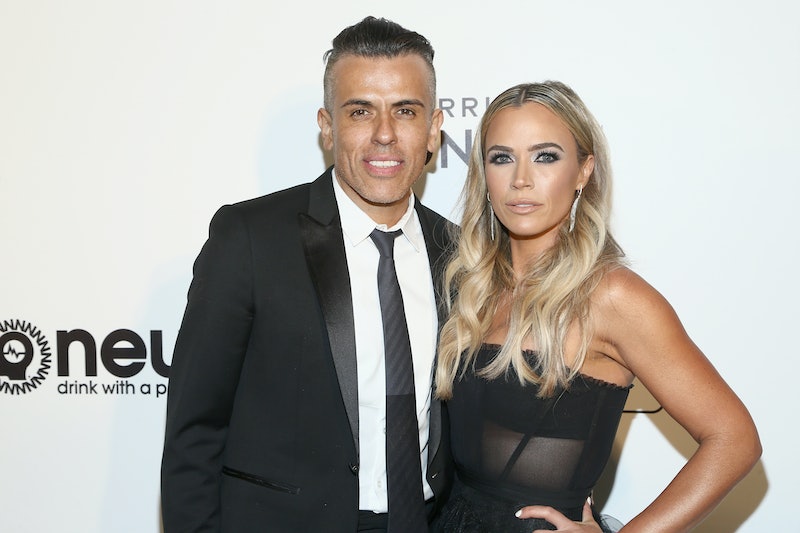 Congratulations are in order for one of the Real Housewives of Beverly Hills. According to Us Weekly, RHOBH star Teddi Mellencamp is pregnant with her third child with husband Edwin Arroyave. And, of course, the family couldn't be more excited about the new addition.

Teddi spoke to Us Weekly about the news, telling the publication, “I’m in my second trimester, 14 weeks." Apparently, the Real Housewife has only recently started sharing the news, as she went on to say, “Everything’s good and I’m in the clear, so I’m just starting to get to that point where I’m sharing with everybody. Plus now I have a bump, so there’s not much more hiding I’ll be able to do!” Not only did the Bravo star speak to Us Weekly about her pregnancy, she and her family also posed for a group photo in matching pink and blue pajamas together to help announce the good news.

Teddi and her husband Edwin already have two children together, 6-year-old Slate and 5-year-old Cruz (Edwin also has a daughter, 10-year-old Isabella, from a previous relationship). Naturally, all of their kiddos are "so excited" to welcome a new baby brother or sister into the family, as the reality star revealed to Us Weekly,

"They’ve been talking about it for a long time and actually it’s been my son who’s been like, ‘Mom, we need to have another baby,’ and I never wanted to get his hopes up. So when we told him, he was through the roof. So excited.”

Her children are so ready to meet their sibling (or, as Teddi put it, "their baby"), that they've already picked out possible names. Basically, the Mellencamp-Arroyave family is more than ready to meet the newest member of their adorable crew.

Teddi and Edwin are "over the moon" about the baby news, particularly after the reality star dealt with some difficult pregnancy-related struggles in the past. While she told Us Weekly that she went through rounds of IVF in order to conceive her daughter and son, the Housewife revealed that they "really weren’t doing anything" this time around and that this "was a complete surprise. I didn’t even know I was because I didn’t have a regular cycle.”

Teddi's RHOBH costars were similarly over the moon about the news, as they took to social media to share some sweet and supportive messages. Erika Girardi (aka Erika Jayne) posted a simple, excited, "BABY" on an Instagram post detailing her friend's announcement.

Lisa Rinna is already looking ahead to the baby shower based on her straightforward Instagram comment on Teddi's post. Given the ladies' penchant for throwing over-the-top, grand celebrations, you can rest assured that the Housewife's baby shower will be all kinds of fabulous.

Kyle Richards took to Twitter to share her friend's news and even highlighted that this will be the first time that a Real Housewife of Beverly Hills will be pregnant on the series.