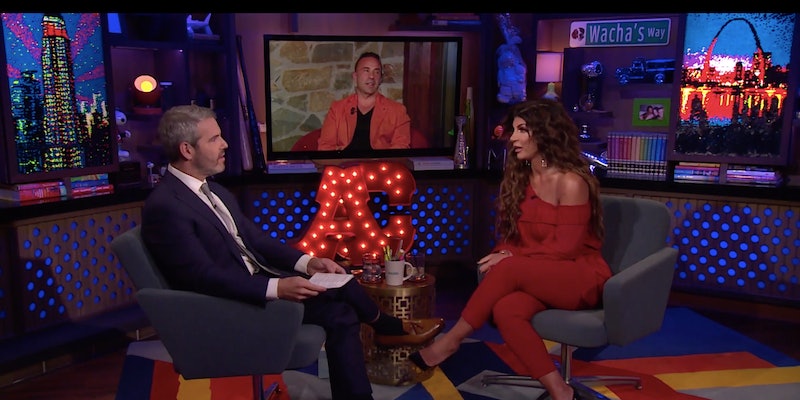 The Real Housewives have gone through it all on-screen, including smashing wine glasses, flipping tables, airing dirty laundry, losing loved ones, and so much more. So it comes as no surprise that after RHONJ's Joe and Teresa Giudice both pleaded guilty to fraud five years ago, viewers have been very invested in their prison sentences and other legal battle updates. On Sunday night, Bravo's Andy Cohen hosted a special called Joe and Teresa: Unlocked, where Joe and Teresa finally discussed the status of their relationship after facing cheating allegations and divorce rumors throughout their time apart.

The couple was able to alternate their prison sentences to take care of their four daughters, with Teresa serving 11 months in 2015 and Joe serving 41 months after her return in 2016. At the Season 8 RHONJ reunion in 2018, Teresa stated she "wouldn't mind" living in Italy on the chance that Joe was deported. However, over a year later, Joe's multiple deportation appeals were denied and he was sent to Italy to wait out the rest of the case — and Teresa changed her tune a bit. At the Season 9 reunion in March, she said, "I'm not doing a long-distance relationship... I want somebody with me every day."

Throughout Joe and Teresa: Unlocked, Cohen grilled the couple on the past, present, and future of their relationship. When Cohen asked if they were faithful while serving their sentences, Joe contended that he was and was quick to express disbelief over Teresa's fidelity. However, Teresa paused and said, "When I was away, he was photographed with women." When Cohen brought up a photograph of Teresa holding hands with another man, she explained it was a friend who was only helping her to her car, adding, "I wouldn't be in public if I was trying to hide anything."

Teresa and her daughters plan on visiting Joe in Italy in November. "I haven’t seen Joe in three years and eight months," she told Cohen. "I’ve definitely changed, and I’m sure he has, too. And I thought he didn’t change speaking to him before, but now the way I’m seeing him speak, he looks changed in a good way."

With the possibility of Joe remaining in Italy being very real, the couple doesn't seem too optimistic about their future. Joe explained, "If we stay together, we stay together. If we don't, we don't. I mean, it’s a conversation that… we’ll see." Teresa seemed to agree that their status remains up in the air and that they'll decide once they see each other in person.

Teresa also shared that their three oldest daughters are aware that divorce is a possibility. “The way I explained it to them, how are we going to live apart? I don’t think he would be faithful, I don’t," she said. "I think he would have someone there and I would be here. I don’t want to live life like that.”

While Joe and Teresa's relationship status may be up in the air right now, what's definite is that the drama will continue to unfold when Season 10 of Real Housewives of New Jersey premieres on Nov. 6.