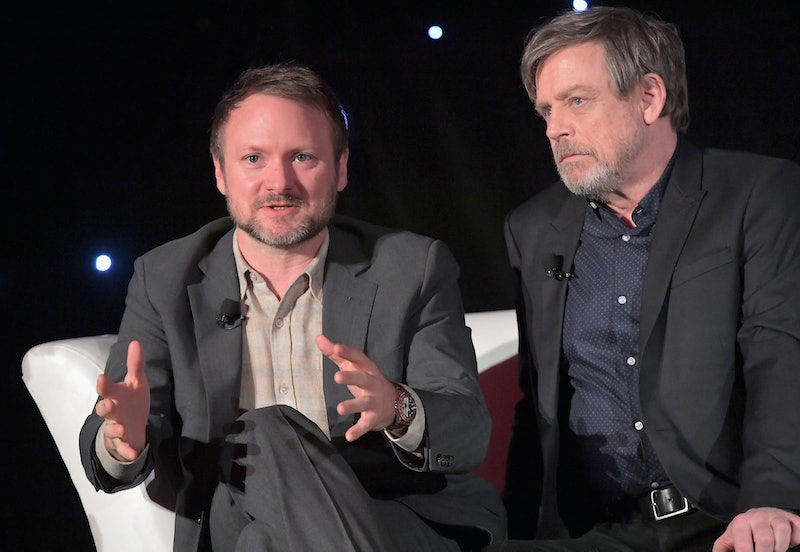 To all those disappointed Star Wars fans in a galaxy not so far away, director Rian Johnson has the best response to your Last Jedi critiques. Specifically, critiques that go after his choice to — spoiler alert — kill off Luke Skywalker in The Last Jedi. It involves screenshots from the movies that came before his as proof that at its core, The Last Jedi wasn't all that different than George Lucas' originals. Johnson's clearly got receipts and a good sense of humor, but don't expect fans to give up on their campaign to see The Last Jedi get remade, — which yes, is a very real thing — just yet.

On June 20, a dedicated Star Wars fan named @SYNCHRONICDSGN tweeted out a past interview Lucas had done alongside Star Wars scribe Lawrence Kasdan, calling it "the difference between @rianjohnson and George Lucas." In the piece, which the fan had annotated in red as to highlight his main points, Lucas said, "You don't want to kill Luke," adding, "I think you alienate the audience."

In the interview, for which no date or source was given, Lucas said he's always "hated" movies that kill off one of their main characters. He explained, "This is a fairy tale. You want everybody to live happily ever after and nothing bad happens to anybody." Lucas went on to say that his priority was to make the audience feel good. "The whole emotion I am trying to get at the end of the film is for you to be real uplifted, emotionally, and spiritually, and feel absolutely good about life," he said.

This definitely seemed like a critique of Johnson's film, which, of course, left some fans feeling very upset after killing Luke Skywalker. And in the interview, Lucas certainly makes it sound like he would never consider killing off a main character.

A week after the original tweet, Johnson only had one word for this fan, "huh," but the screenshots he shared along with his message are certainly worth a thousand words. Johnson posted photos of the decidedly un-fairy tale moments from Lucas' Star Wars movies — both the original trilogy and the prequels — including that time he killed off Obi-Wan Kenobi in A New Hope and everyone's favorite mentor Yoda in Return Of The Jedi, both main characters. Johnson also included moments when bad things did, in fact, happen to good characters, like Luke having his hand cut off.

There were so many of those bad moments Johnson ended up tweeting "2/2" with more photos, depicting Anakin going to the dark side and Padmé dying during child birth. He then went even further, tweeting a final "bonus track" that included a screenshot from the famous Revenge of the Sith scene in which Anakin Skywalker kills a bunch of poor defenseless children.

Johnson's epic Twitter thread of doom and gloom in the Lucas' Star Wars films was all to say that even the original Star Wars director didn't adhere by the "don't kill anybody" rule, which makes sense, because you need some conflict to make a movie work. Johnson's take on Star Wars might not be everyone's cup of tea, but to claim that Lucas never killed a beloved character is false.

Johnson's tweets were appreciated by @SYNCHRONICDSGN, who replied to the director by letting him know his "main gripes" with the film are that he "abandoned the spirit and heart of Star Wars in favor of your own ideas, opinions, and mindset, rather than continuing a 40-year legacy. Skywalker and the rest of almost every thing in the film subverted all that was."

That isn't how Johnson sees it, and he wrote back that The Last Jedi was certainly his take on the Star Wars universe, but that it still "distills what the spirit & heart of SW." Johnson added, "Yes it is personal, it’s a certain pov, and it has to be — originals were personal for GL, that’s why they’re alive. SW films will truly betray the heart & spirit of the originals if they lose that."

In the end, these two might just have to agree to disagree, but it's nice to see some polite discussion on Twitter. No doubt this won't be the last time a fan goes after The Last Jedi on Twitter, and it probably won't be the last time Johnson feels compelled to defend the film. Still, this response is pretty epic, and should at least shut down the argument that Lucas never killed any Star Wars characters off once and for all.