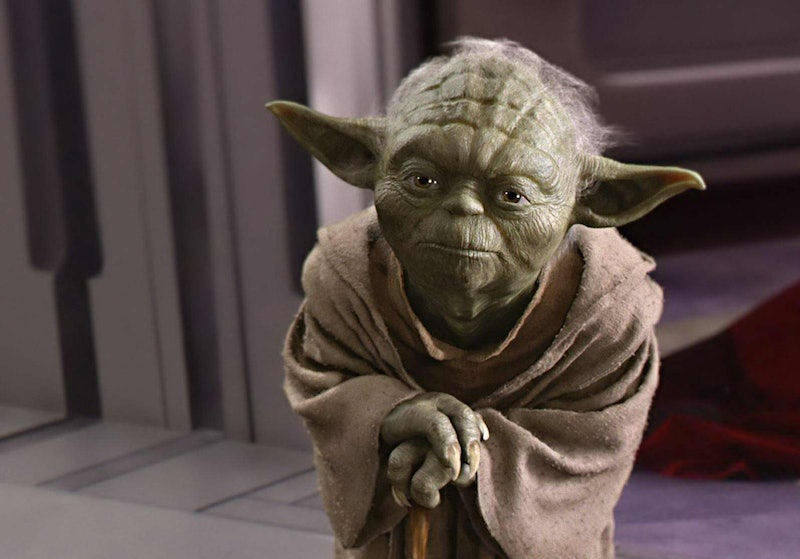 I absolutely adored the new Star Wars film, and I know I'm not alone. High praise to J.J. Abrams, who took a tattered and scattered universe canon and created a movie with the spirit and excitement of the original films (not to mention he gifted the world Rey, who is literally my favorite thing since Princess Leia stared down Darth Vader in A New Hope like a total badass). But even with all of the awesome new characters and familiar favorites, it felt a little bit like something was missing from The Force Awakens. Then it struck me — I was missing Obi-wan, the sexiest Tatooine hermit ever, and Yoda, the little green man with ears as big as his wisdom-filled head. Well it turns out Abrams had that covered too, because Obi-Wan and Yoda are in T he Force Awakens, actually — you just didn't seen them on-screen.

Halfway through the new film, Rey touches the Skywalker lightsaber and experiences a vision quest. She is transported through a series of dark, violent, and unexplained images. She sees Luke, cloaked and in mourning, inside a lava-filled cave; she sees Kylo Ren surrounded by the dead bodies of Jedi; and she sees her own abandonment upon the planet of Jakku. Adding to their significance, the visions are accompanied by a voice-over from none other than the OG Jedi Masters, Yoda and Obi-Wan Kenobi.

During these visions, audiences are treated to a mix of new and old dialogue. Luke's, "Nooooo" from Empire Strikes Back is heard, and Yoda's ever-whimsical dialogue (also from the original trilogy) truly set the tone for the dream-like sequence. Together give creditably and emotional heft to Rey's vision's insight on the past. The newer dialogue, provided by Obi-Wan, accompanies a look into Rey's future. When the vision shows Rey battling Kylo Ren in a snowy forest, you can hear Obi-Wan saying, "Rey...these are your first steps." Later in the film, the vision comes true, and Kylo Ren and Rey lightsaber-battle marks the first time Rey fully embraces the force. Meaning: this scene is Rey's first step toward realizing her potential as a Jedi.

According to an interview Abrams did with Entertainment Weekly, the new Obi-Wan dialogue was created using both voices from the original and prequel Obi-Wan Kenobis. Resident Scottish hottie and prequel Obi-Wan, Ewan McGregor, provided the "these are your first steps" part through new voice recordings. Abrams added that after Ewan McGregor finished his voice-over work, he rode off into the sunset on a motorcycle — which is exactly how I like to picture my Obi-Wan. #swoon. Meanwhile, original actor Alec Guinness, who died in 2000, provided the "Rey." How? Through movie magic, of course. Abrams told EW reports that the filmmakers isolated a syllable from Alex Guinness saying "afraid" in the original films. From there they were able to create a recording of Guinness saying "Rey." So when you hear Obi-Wan talking, it is both Guinness and McGregor. The old and the new coming together in perfect harmony — just like Star Wars: The Force Awakens.

There is still so much left to unravel about Rey's vision. What does it all mean? What does it say about Rey's origins? Will audiences get to see more Yoda in the subsequent films? Only time will tell, but I am excited for the ride.