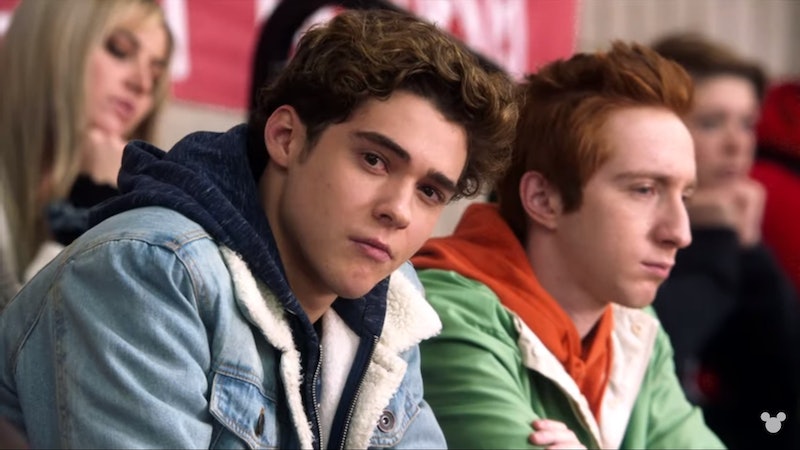 In lieu of Zac Efron as Troy Bolton, Disney+'s High School Musical: The Musical: The Series has Joshua Bassett as Ricky, a character described by Deadline as a "cynical but charming high school junior" who tries to win his ex-girlfriend Nini (Olivia Rodrigo) by auditioning to star with her in the school musical. Disney's Chief Creative Officer told the outlet Bassett's performance was "funny, winning and, at the same time, uniquely vulnerable," which ultimately won him the part. However, the 18-year-old's talent for singing and dancing likely helped seal the deal.

According to IMDb, Bassett began doing musical theatre when he was seven, and has since performed in more than 30 productions. He landed his first TV role in 2017, when he played Will in an episode of Lethal Weapon. A year later, he took on the role of Brock in an episode of Game Shakers, and in 2018 he nabbed a recurring role as Aidan Peters in Stuck in the Middle.

Bassett went on to appear in Grey's Anatomy and Dirty John before being cast in High School Musical: The Musical: The Series, which will give him plenty of opportunities to show off what he can do — not only as he goes head-to- head with fellow student E.J. (Matt Cornett) for the role of Troy in the school production of High School Musical, but as he attempts to win back Nini's affections. (Based on the few videos posted to his Instagram, Bassett seems more than equipped to serenade an ex).

As an addition to the High School Musical franchise, High School Musical: The Musical: The Series serves to usher in a new generation of fans who were perhaps a bit too young to have seen the original mid-2000s film trilogy. Casting a young group of newcomers like Bassett certainly worked for Disney before — according to CNN, they made made roughly $1 billion from the franchise in 2006 and 2007 alone — so it makes sense that they'd want to continue to capitalize on a winning formula.