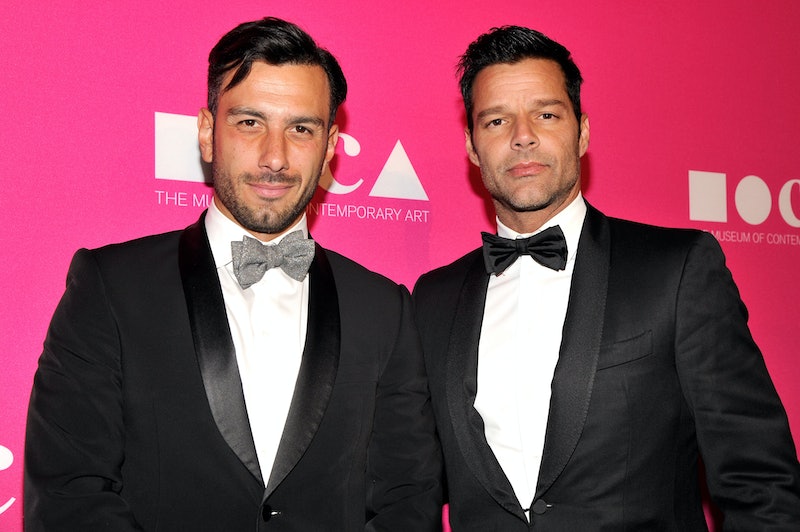 Ricky Martin and his husband, Jwan Yosef, are kicking off the new year with a new baby in tow. Yosef and Martin have welcomed a daughter, the couple revealed on Instagram on Monday, Dec. 31. And it looks like the two of them couldn't be more thrilled to be co-parents to their baby girl.

Martin shared a sweet photo of the baby holding both of her dads' hands. They've named their bundle of joy Lucia Martin-Yosef, the singer and actor shared in his post. He wrote,

"We are beyond happy to announce that we have become parents to a beautiful and healthy baby girl, Lucia Martin-Yosef. It has been a special time for us and we can wait to see where this baby will take us. Both her beautiful brothers and me and Jwan have fallen in love with Lucia."

Yosef shared the same photo and caption on his Instagram page, too. Their mention of Lucia's brothers is a reference to Martin's twin boys, Valentino and Matteo, People noted. And it looks like the singer's family is coming full circle. Back in February 2017, he said on Watch What Happens Live with Andy Cohen that he wanted to have more kids, and that he wanted to have a daughter. "I want a big family... Daddy's little girl has to come," the "Livin' La Vida Loca" singer said at the time.

Martin and Yosef confirmed their marriage in January. The Assassination of Gianni Versace: American Crime Story actor announced the engagement in 2016, during an appearance on The Ellen DeGeneres Show.

"He's a conceptual artist, and I'm a collector," Martin told DeGeneres of his now-husband, who is an artist and painter. "So I started looking for art and I saw his art and I went crazy because I love what he does, really original, and I contacted him — and then I collected him."

The couple have been raising Martin's twins together before welcoming their daughter. And this past January, Martin shared some insight into their family life together in an interview with Luisa Fernanda on the Univision MIX 98.3 radio station. The singer told Fernanda that one of his children had once asked him if they were "in [his] belly," and he had a thoughtful response to the question.

"I told him, 'You were in my heart and you are still in my heart,'" Martin said on the radio show, according to the Huffington Post. "There was a woman that I adore with all my heart that helped me bring you into this world. She lent me her belly so that you could come and when you were born she put you in my arms.'"

In a separate interview with Out magazine in January, Martin called his and Yosef's raising the twins a "modern family." He told the magazine, "I want people to look at me and see a family and say, 'There's nothing wrong with that.'"

Based on what he's said about parenting in the past, it sounds like Martin is more than prepared for all of the challenges and delights that come with raising a child. His and Yosef's photo with their daughter is too sweet, and it's clear they'll be very devoted dads.

More like this
How Much Are The 'Schitt’s Creek' Stars Worth?
By Hugh McIntyre
The Try Guys Clarified Ned's Cheating Scandal Timeline In A New Video
By Grace Wehniainen
Lindsay Lohan & Jonathan Bennett Celebrated Mean Girls Day Very Differently
By Jake Viswanath
Everything To Know About Taylor Swift’s 10th Studio Album, 'Midnights'
By Grace Wehniainen and Jake Viswanath
Get Even More From Bustle — Sign Up For The Newsletter