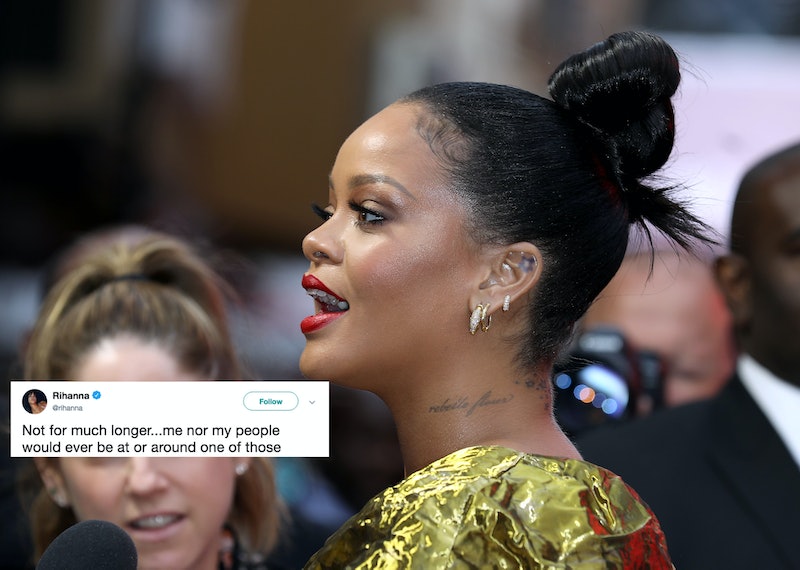 Yet another celebrity doesn't want Trump to use their art as a part of his campaign. After news broke that one of her many hit songs was reportedly being played a Trump rally, Rihanna let Twitter know exactly how she felt.

It all started on Sunday afternoon when Trump was in Chattanooga, Tenn., stumping for Marsha Blackburn. She currently represents the 7th Congressional District of Tennessee, and is vying to be the state's first woman senator. (Taylor Swift publicly endorsed and voted for Blackburn's Democratic opponent, Phil Bredesen.) "If you want to stop the liberal agenda of high taxes and high crime, you need to vote for Marsha," Trump told the audience of about 12,000 people in Chattanooga, according to The Tennessean.

According to Post White House bureau chief Philip Rucker, Rihanna's "Please Don't Stop The Music" was playing at the time. He compared the atmosphere of the rally to a sporting event. "It's been said a million times, but here’s a million and one — Trump’s rallies are unlike anything else in politics. Currently, Rihanna’s "Don't Stop the Music" is blaring in Chattanooga as aides toss free Trump T-shirts into the crowd, like a ball game," Rucker tweeted on Sunday. "Everyone's loving it."

About 90 minutes later, Rihanna weighed in — and she was not pleased. "Not for much longer...me nor my people would ever be at or around one of those tragic rallies," Rihanna tweeted.

Rihanna also thanked the Post reporter for alerting her to the song's use. "So thanks for the heads up philip!" she wrote.

Rihanna isn't the only singer who doesn't want Trump to play their songs at his campaign rallies. When songs by Grammy winner Adele started appearing at rallies, her spokesperson had to clarify that Adele didn't give permission to have the songs played.

When Trump played "It's the End of The World as We Know It (and I Feel Fine)" at a rally for his opposition to the Iran nuclear deal in September 2015, R.E.M. asked Trump to stop using their song. Furthermore, USA Today reported that Aerosmith sent a cease-and-desist letter to halt the use of their hit "Dream On." According to the newspaper, Neil Young, The Rolling Stones, Twisted Sister, and Elton John have sent similar letters as well.

And this isn't the only way Rihanna's speaking out as midterms approach. She's also endorsed Andrew Gillum for Florida governor, as well as on Florida's Amendment 4. On Instagram, she wrote:

You have the opportunity to make history this election. The US has only had four black Governors in its entire history, and we can help make #AndrewGillum the next one and Florida’s first!

If you’re tired of feeling like you don’t matter in the political process, know the most important thing you can do in supporting a candidate is finding someone who will take on critical issues such as: making minimum wage a livable wage, paying teachers what their worth, ensuring criminal justice reform, making healthcare a right, and repealing Stand Your Ground.

If one thing's for sure, it's that you probably won't hear another Rihanna song at Trump's rallies. She's made it crystal clear that she — nor her fans, she says — support such events.