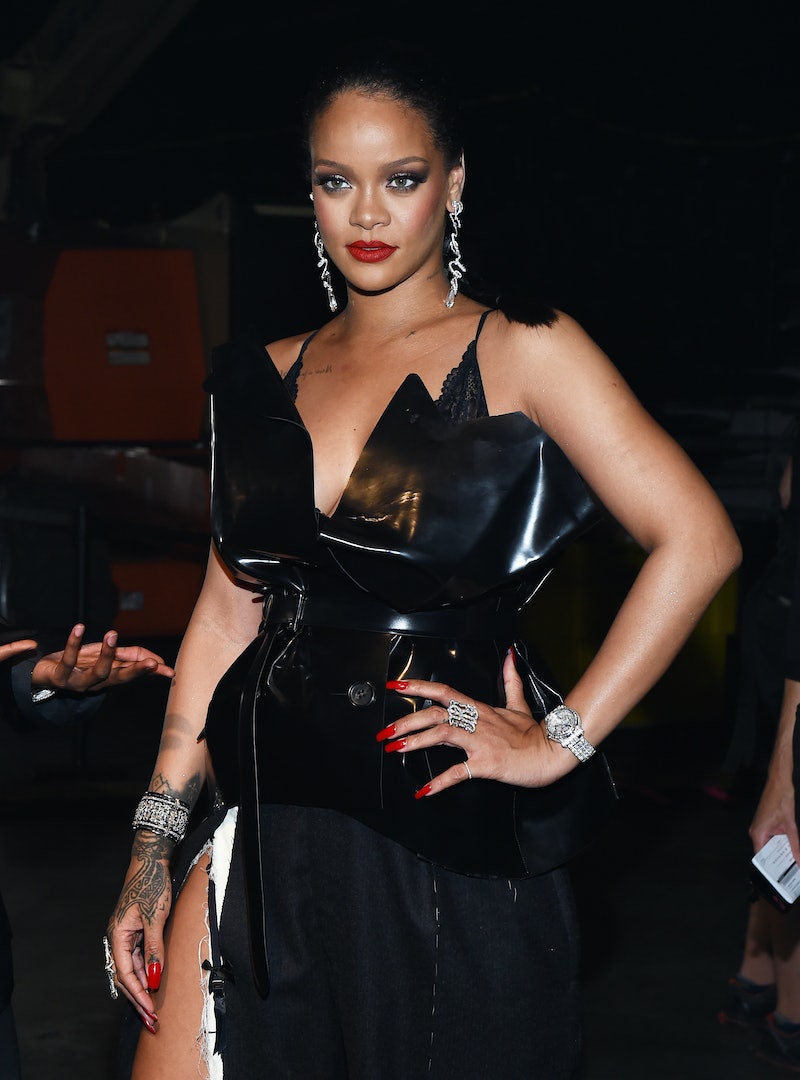 In 2018, Rihanna fans began to hope that the singer would be chosen to headline the 2019 Super Bowl Halftime Show. But soon, rumors swirled that though she had been offered the gig, she turned it down. And, as it turns out, those rumors were true. In a new interview with Vogue, published on Wednesday, Oct. 9, Rihanna confirmed she turned down the Super Bowl halftime show in 2018 to stand in solidarity with Colin Kaepernick.

In her new Vogue cover story, the singer/beauty mogul/fashion designer confirmed that she "absolutely" declined to headline the Super Bowl Halftime Show because she supported Kaepernick. “I couldn’t dare do that," she said about performing at the event. "For what? Who gains from that? Not my people. I just couldn’t be a sellout. I couldn’t be an enabler." She went on to call out the National Football League (NFL) specifically, saying, "There’s things within that organization that I do not agree with at all, and I was not about to go and be of service to them in any way.”

In 2016, Kaepernick, then a San Francisco 49ers quarterback, protested police brutality and racial injustice in the U.S. by kneeling during the National Anthem. This garnered major criticism from conservative fans and politicians at the time, and continues to be a hot button topic — President Trump recently commented on Kaepernick. Months after becoming a free agent in March of 2017, he filed a lawsuit with the NFL in October of that same year, accusing the organization of blacklisting him to prevent him from being signed to other teams due to his protests. The case was settled in February 2019.

Although fans may never see Riri on the Super Bowl stage, the singer will be releasing new music — eventually. Speaking with Vogue, the singer also opened up about the new music fans have been asking for since the 2016 release of her most recent album Anti.

Rihanna teased her new album, confirming once again that it would have a stronger reggae influence. “I like to look at it as a reggae-inspired or reggae-infused album,” she said. “Reggae always feels right to me. It’s in my blood. It doesn’t matter how far or long removed I am from that culture, or my environment that I grew up in; it never leaves."

And although she has her hands full with her many businesses, including Fenty Beauty and her luxury fashion house Fenty Maison, Rihanna assured fans that she has no plans to stop making music altogether. “Me the designer, me the woman who creates makeup and lingerie—it all started with music," she remarked. "It was my first pen pal–ship to the world. To cut that off is to cut my communication off. All of these other things flourish on top of that foundation.”

In fact, even though her upcoming album isn't even done yet, she's already thinking about the one after that, which would be her tenth record. “We always went into the music this time around saying that we were going to do two different pieces of art,” she said. “One was gonna be inspired by the music that I grew up listening to. And one was gonna be the evolution of where I’m going next with music.”

While a speedy drop of new tunes would no doubt be preferred by fans, as long as she's going somewhere when it comes to music, the Navy is sure to be satisfied.