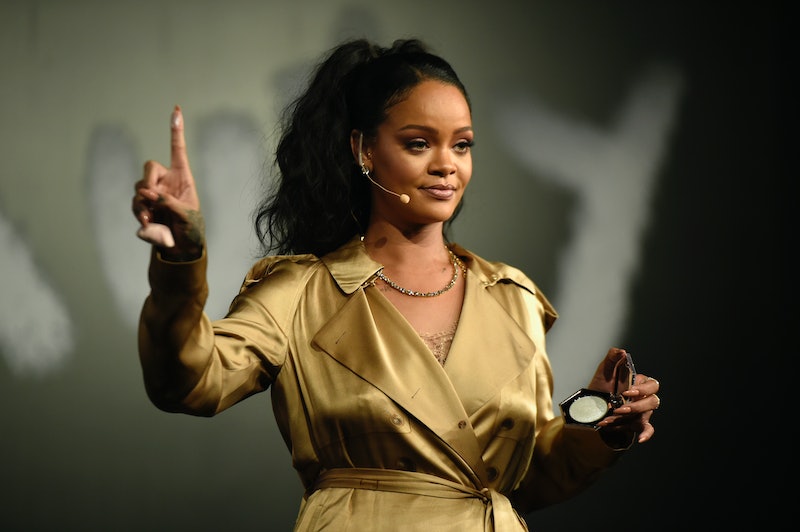 With the 2018-2019 NFL football season now in full swing, reports that Rihanna has turned down the Super Bowl Halftime Show in support of Colin Kaepernick come amidst a time where many celebrities have found the importance of using their platforms to fight for social justice. According to a source for Entertainment Tonight, the "Diamonds" singer was being pursued as "the front-runner for next year’s super bowl halftime show." The insider explained, "CBS and the NFL reached out to Rihanna first, who after thinking about the offer, decided to pass due to the NFL and the situation regarding players kneeling." The source went on to share that although, "the offer and exposure would have been great for Rihanna," because she has a new album in the works, she "stands with the players and Colin Kaepernick" and is sticking to "what’s right in her eyes." (Bustle reached out to Rihanna, the NFL, and CBS for comment but did not hear back at the time of publication.)

Rihanna has not yet given a statement on the subject, and it should be noted that a second source for ET said that Kaepernick was not a mentioned factor in the entertainer's initial discussions with the NFL. That insider indicated that the organization approached both Rihanna and Pink to perform at halftime show and claimed that after negotiations dragged on, both women ultimately declined. Pink, who sung the National Anthem at last year's ceremony, has also not commented on her reason for reportedly turning down this year's offer to perform at the halftime show nor has she addressed Kaepernick and his stance with the NFL.

If the reports of Rihanna standing with Kaepernick are actually true, she isn't the only to showing her support by refusing to perform at the Super Bowl. Earlier this year, Rihanna's Roc Nation boss, JAY-Z indicated on the song, "Apesh*t" that he too turned down a recent offer from the NFL to perform at the Super Bowl. On the track, which was the first single from his joint album with wife Beyoncé, JAY-Z rapped:

"I said no to the Super Bowl, you need me, I don't need you / Every night we in the endzone, tell the NFL we in stadiums too"

In the music video, JAY-Z rapped these lyrics as a dozen people took a knee. The news that the hip-hop mogul chose not to perform during the 2018 Halftime Show was initially reported by the Source in September 2017. Although there was speculation that he was taking a stance for Kaepernick, given that he's shown a great deal of support for the athlete over the years, JAY-Z reason for declining the offer was unclear until the release of "Apesh*t."

In addition to JAY-Z and Rihanna, there have been a plethora of other artists and athletes who have used their celebrity to voices in support of the former NFL quarterback, including; Beyoncé, John Legend, Spike Lee, LeBron James, Carlos Santana, T.I., Big Sean, Serena Williams, J. Cole, Taraji P. Henson, Michael B. Jordan, and Chuck D, according to Billboard. Nike also recently took a huge stance by making the controversial move to use Kaepernick as the face of its 30th anniversary ad campaign despite its longtime partnership with the NFL.

While the league has definitely lost the support of many important figures in the entertainment industry and beyond, it seems that they have been working hard to secure a headliner for the highly-anticipated annual performance. This past September it was reported by Variety that Maroon 5 would be playing Super Bowl LIII, which is set to take place at Mercedes-Benz Stadium in Atlanta on Feb, 3, 2019. However, the influx of harsh criticism that followed after the league seemed to ignore the rich musical backdrop of the south in its decision-making process has seemingly led the NFL to neither confirm nor deny the performance, according to CBS Sports.

Kaepernick, who was the first professional football player to kneel during the national anthem in silent protest of police brutality and racial injustice, has not played since the 2016 season. He later filed a grievance lawsuit against the NFL and its owners in November 2017 with accusations of colluding to keep him from playing in the league.

While Rihanna not performing at the Super Bowl may come as a major disappointment, her commitment to standing behind Colin Kaepernick, despite the backlash or detriment that it may cause her career and earnings, will only make fans love her that much more and that is certainly inspiring to see.

More like this
Twitter Is Freaking Out Over Rihanna’s 2023 Super Bowl Halftime Show Announcement
By Stephanie Topacio Long
Self Esteem's “F*cking Wizardry” Is An Anthem About Knowing Your Worth
By El Hunt
Everything To Know About Taylor Swift’s 10th Studio Album, 'Midnights'
By Grace Wehniainen and Jake Viswanath
The Spice Girls Just Dropped A Brand New Music Video
By Sam Ramsden
Get Even More From Bustle — Sign Up For The Newsletter