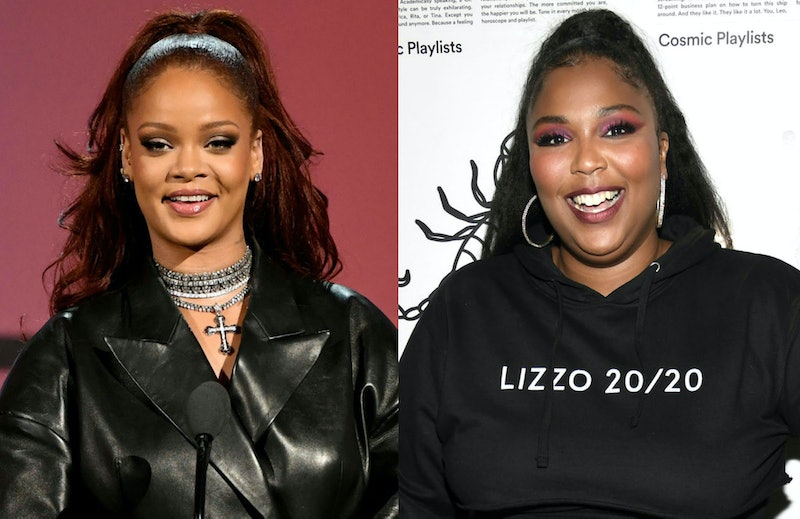 Now here's a collaboration that needs to happen sooner rather than later. After the 2019 MTV Video Music Awards, Rihanna slid into Lizzo's DMs. You read that right. According to the "Truth Hurts" musician, Rihanna praised Lizzo's VMAs performance. Like so many others, Rihanna thought the newly beloved talent did an amazing job and decided the best way to celebrate Lizzo was by sending the artist a direct message on Instagram.

While chatting with Entertainment Tonight after the awards show, the "Good As Hell" artist dished about Rihanna, "She DM'ed me to tell me that I performed good. She said I f*cked the stage like it was my side b*tch. Don't get mad, Rihanna. I am not trying to blow up your spot, but that was a hard ass line! I might take that line."

Talk about a compliment! Rihanna's message will certainly make fans hope she collaborates soon with Lizzo. Can you imagine the award-winning music they'd create? Of course, the "Juice" singer is down to record with RiRi, but she isn't going to push the matter. Like many fans, Lizzo simply wants new music from the singer and it doesn't even have to include herself. "Listen, we need a video of Rihanna in the studio, period," Lizzo told ET. "I am not going to bother her, 'cause I know what that feels like, so I am going to let her do what she ought to do. I love Rihanna."

This isn't the first time the "Diamonds" singer has showcased her love for Lizzo. In June, Rihanna cheered on Lizzo at the 2019 BET Awards. During her performance, cameras caught RiRi dancing and clapping. Lizzo was honored. So much so, the 31-year-old tweeted a side by side of Rihanna's reaction and herself on stage. She perfectly captioned the images, "That’s it... that’s the tweet."

As for collaborations, Lizzo is a big fan of them. She recently worked with Justin Timberlake. On Aug. 15, the Man of the Woods artist tweeted a video with Lizzo and captioned it, "@lizzo flames, brb." She told ET about their project, "I had fun doing it. Collaborations, for me, is about the energy and the relationship. I mean, it is Justin Timberlake, so I am not trying to be like, 'Ahh, I didn't have a good vibe with Justin Timberlake.'" She even said they "laughed a lot" and revealed, "He gets lit in the studio. He goes crazy. He was like, 'Turn up!' It's his world, we're all kind of living in it."

Yeah, Rihanna and Lizzo need to work together and immediately. They would certainly create music magic. Can you also imagine the video? All of it would be on fire.

There's no denying the energy and relationship between Lizzo and Rihanna in the studio would be "lit" just like her session with Timberlake. Keep those fingers crossed that a collaboration between the powerhouses actually happens. It doesn't need to be right now, but at some point it would be nice to see RiRi and Lizzo unite their talents.