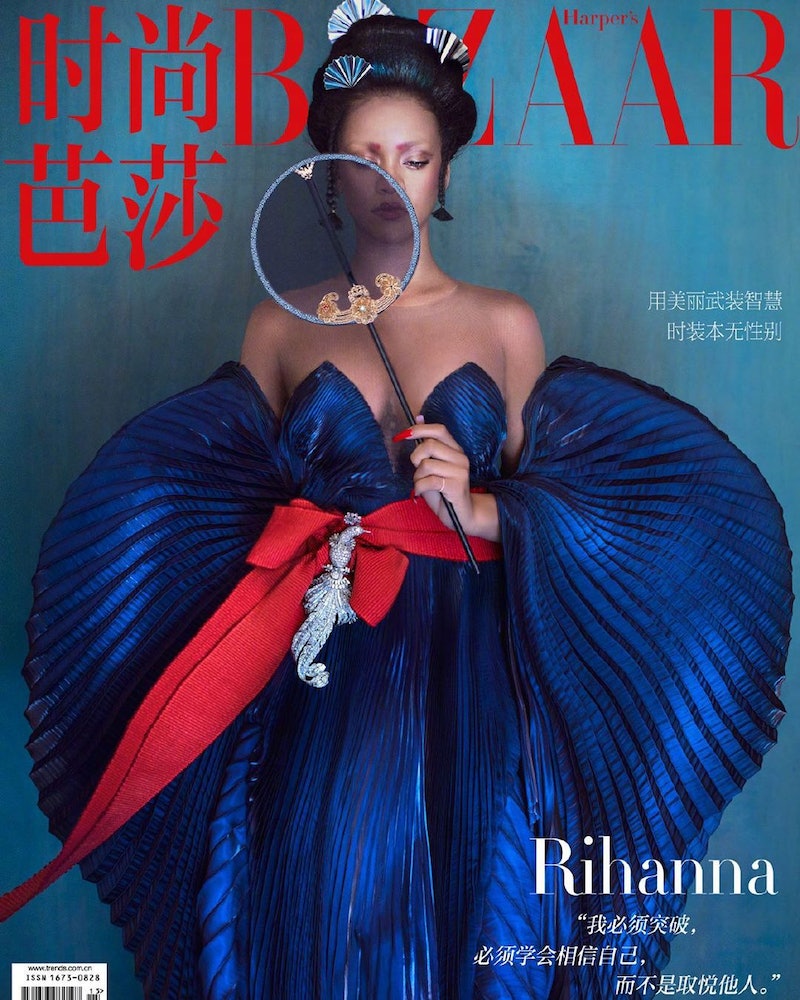 Rihanna may not have launched a new album yet, but she's still hard at work. Between her beauty and fashion empires, Rihanna is shooting covers, and a new one just landed. Rihanna's Harper's Bazaar China cover is here, and according to an Instagram post from the magazine's account describing the shoot, the cover is all about, "when Western style icon meets Eastern aesthetic."

On Tuesday, Rihanna also took to her Instagram account to post the first look at her latest cover. In the image, the actor, singer, and beauty and fashion mogul is wearing a vibrant blue, deep sweetheart neck gown with billowing sleeves. Just above her natural waist, she's wearing a bright red sash with a glittering silver tassel. Her hair is up in an elaborate updo with fans strategically placed along the coif, seemingly meant to invoke traditional Chinese hairstyles.

Even Rihanna's makeup look seems to emulate historical Chinese beauty styles. Her brows are blocked with a pop of red at the front, lips painted in red just at the center, and vibrant blush along her cheeks. According to the Fenty Beauty owner's post, the look was done by Fenty Global Artist Priscilla Ono.

According to Harper's Bazaar China's own Instagram account, the idea behind the cover and inside spread was to combine a Western style icon like Rihanna with Eastern aesthetics. In photos posted to its account, you can see the singer in multiple looks with references to Chinese cultural symbols like a manicure featuring lotus flowers, the fans in her hair, and even a shih tzu in the corner of one image.

In a post on Instagram, Harper's Bazaar China writes, "There is always a brave truthfulness on Rihanna...She doesn't care about judgments from others, justing keep in doing what she loves. After four years, Rihanna is back to be our cover star and again shows when western style icon meets eastern aesthetic."

So far, the vast majority of comments on both Instagram and Twitter appear to be positive. But there are some who are asking whether Rihanna's cover is culturally appropriative. Bustle has reached out to Harper's Bazaar for comment.

Cultural appropriation often involves taking select elements of a marginalized groups' culture and profiting or gaining something from it while also playing into racist tropes. It's something Rihanna has been accused of before.

In 2012, the singer teamed up with band Coldplay on the song "Princess of China." The video for the song featured cherry-picked stereotypes from many Asian cultures, not just Chinese. For some, the amalgamation of cultures marked the song's video, which it's important to remember is named "Princess of China," as having no research-based homages done in order to celebrate the culture instead of to simply use it. Many claimed that the aesthetics of the video and stereotypes portrayed within it were offensive and appropriative.

Now, with images from Rihanna's Harper's Bazaar China cover on the internet, comments that read "Princess of China" and GIFs from the music video are making the rounds in response. However, many others online are still questioning if the cover actually is appropriation at all.

One of the ways people are drawing the distinction is due to the credit given to Chinese staff of the magazine and photographer who created the images as well as the fact that the magazine is Harper's Bazaar China. Many users on Twitter were quick to note the roots of the the cover and the artistic team behind it. In both Rihanna's post and the magazine's, credit is given to the photographer, stylist, director, and editors of the shoot. The cover, while having crossed into Western consumption thanks to the internet, was made for Chinese viewers by Chinese artists.

While Rihanna has previously faced accusations of appropriation, it appears that the dominant thought online about the cover is that it leans more toward appreciation. Particularly, Rihanna credits all of the Chinese artists and talent who helped to create the cover, and the cover itself is for consumption in China despite the fact that its internet presence has made it available to Western audiences. Ultimately, though, the decision to call Rihanna's cover appropriative or appreciative is up to the viewer.