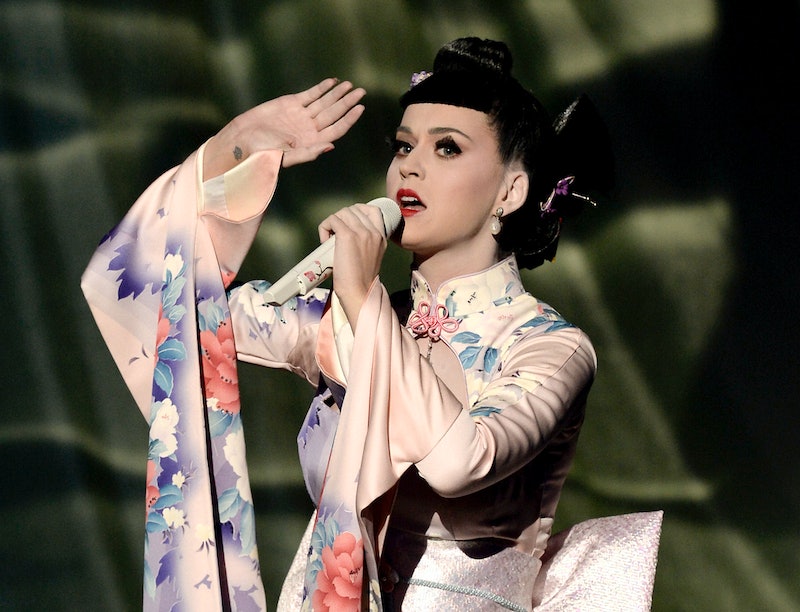 There have been so many displays of cultural appropriation in the media these days that it's hard to know where to start. Miley Cyrus probably takes the cake for culturally appropriating with the most consistency, from her incessant twerking to the proud premiere of her dreadlocks at the 2015 VMAs. Selena Gomez, Gwen Stefani, and Taylor Swift have also unfairly borrowed from another culture, on more than one occasion. Even Queen Bey has been accused of cultural appropriation in the Coldplay music video "Hymn for the Weekend," in which she paraded around in traditional Indian garb.

Here's my short definition of cultural appropriation: when a group of privileged individuals cherry-picks part of a culture belonging to a group of marginalized people, then uses it for fashion or performance purposes, leaving behind the true meaning of the characteristic and thus disrespecting the culture from which it was born. When we hear retorts about the offensiveness of cultural appropriation, people will often say they're simply "appreciating the culture". While cultural appreciation is possible, the line often gets crossed into appropriation because these representations lead to overgeneralized racial stereotypes.

Crudely snatching parts of a culture and turning them into a temporary trend affects more than just the marginalized group the cultural elements were stolen from. All of us feel the consequences, even if you don't realize it. By idly standing by, we're robbing ourselves of the chance to break free of the systemic racism that still lives on in our society — like the fact that people of color still make less money, are disproportionately imprisoned, and are even more likely to die in childbirth. It may seem like a small step, but stopping cultural appropriation in its tracks could help us get closer to understanding that people of color are still oppressed. Because the less we appropriate, the more likely we are to start seeing each other as human beings, not tokens.

Here are five ways cultural appropriation hurts us all.

1. It Perpetuates The Values Of White Colonialism

The past of white colonialism is no joke, and it's a history lesson that should never be taken lightly. The first recorded instances of European colonialism happened in the 15th century, perhaps most notably when Christopher Columbus tried to lay claim to the Native Americans' land. India was forced to exist under the colonial powers of Europe until 1954, and these are just two of many examples.

Many elements that existed in times of white colonialism still live on in instances of cultural appropriation. For example, the dominant white colonialists cared little about the well-being of the people whose home they occupied, yet were intrigued by certain aspects of the minorities over whom they ruled, often adopting these cultural characteristics against the will of the minorities and used them to their liking. In the 1800s, when Britian colonized and ruled over India, some members of British families who employed Indians as servants found certain aspects of their history interesting, like their finery and tapestry, yet they refused to let them speak their native language and were infuriated when British children spent time with young Indians. Sound familiar?

Taylor Swift and her "Wildest Dreams" video hits both cultural appropriation and white colonialism in a single shot. The video generalized the entire continent of Africa in one fell swoop — gorgeous highlands, pretty giraffes, and stunning sunsets — yet there was not a single person of color in the four-minute video, neither was there any acknowledgment of Africa's immense poverty and devastating civil wars. Instead, the old days of white colonialism were romanticized and portrayed as an acceptable, even normalized part of history.

Cultural appropriation in this fashion is holding back our entire society from moving forward, where we should be — far, far away from our colonial past and instead more concerned with a future that values equality.

2. It Distracts Us From How Much The Communities We Borrow From Are Still Marginalized

When Kylie Jenner showed off her cornrows on Instagram last year, a lot of people expressed their discontent with her blasé approach to a hairstyle that originated in the black community. She seemed to don those braids without understanding the fact that countless black women have been fired from their jobs because they choose to sport this style, which was actually created to suit their natural hair.

Actress and intersectional feminist Amandla Stenberg boldly spoke up on the matter. She expressed her opinion in a lengthy Instagram post in which she asked, "Do black females lives matter, too?" She wrote about how most people only consider black features and styles to be attractive when they're worn by white people. The black women they come from aren't considered beautiful and they're often objectified. She said, "Black features are beautiful, black women are not." No matter how many celebrities came to Kylie's defense (ahem, Justin Bieber), none of them seem to understand how unjust it is that people fetishize certain aspects of black culture, yet don't care at all about the systemic oppression these individuals endure on a daily basis.

Black women are among the most marginalized people in this country — they make significantly less money, they're sexually assaulted more often, and they're more likely to struggle with mental illness — but people find it more compelling to copy their hairstyles than pay attention to this structural discrimination. In an interview with the New York Times, Nicki Minaj shed light on this issue by saying, "Come on, you can’t want the good without the bad. If you want to enjoy our culture and our lifestyle... then you should also want to know what affects us, what is bothering us, what we feel is unfair to us. You shouldn’t not want to know that."

3. It Prevents Us From Learning The True Meaning Of Cultural Exchange

Borrowing from a particular culture becomes appropriation when the chosen characteristic is used as a passing fad and all the cultural significance has been removed from it as a result. Does Selena Gomez understand why and how the bindi is used among Indian women? The history behind it? The spiritual meaning of it? If we keep letting celebrities diminish such traditions that carry magnitude for an entire group of people (a group that white people invaded and colonized not that long ago), we'll never teach the next generation what it means to politely appreciate other cultures.

A good example of cultural exchange, not appropriation, is being invited to a Diwali celebration, the ancient Hindu festival of lights, and subsequently wearing the traditional sari, bangles, and a bindi on your forehead. In this situation, you've been asked by members of the Indian community to participate in, learn about, and enjoy their culture. This is entirely different than slapping a sari on when you feel like standing out from the crowd.

4. It Confuses People About Which Traditions Come From What Cultures

I've been mistakenly called Chinese by a lot of people ever since I was a kid. When I correct them and say I'm Korean, almost every one of them responds with a version of the following: "Oh, same thing." Well, cultural appropriation feeds into this offensive stereotype, making people believe that a whole region of the world is exactly the same, regardless of the differences between the countries and cultures that have existed there for thousands of years, long before the United States of America was even a thought.

Perhaps the best example of this is Katy Perry's 2013 American Music Awards performance of her song "Unconditionally." The whole stage, the dancers, and Katy Perry herself were attempting to exhibit a geisha theme. Needless to say, it was a disaster. It was a crude stereotype of shy, dainty Japanese geishas, most of whom were white women with eye makeup to make them appear Asian, bringing their hands together in prayer position and waddling around in supposedly bound feet. It was made clear that Katy Perry and her crew knew next to nothing about the history of geishas, and instead chose to cash in on Asian stereotypes that probably came from a 1950s postcard.

But here's the real kicker: Katy Perry's "kimono" was partly a Chinese Cheongsam dress. So she managed to tastelessly lump together two cultures that have very different histories and traditions, as if they were the same. This kind of thoughtless cultural appropriation perpetuates the hackneyed idea that vaguely similar non-white, non-American cultures can be grouped into one big pot for the sake of art.

If you look at Kylie Jenner's cornrows selfie, Katy Perry's AMA performance, and Beyonce's "Hymn for the Weekend" video, you can't help but see their appropriations as ridiculous props. Imagine how that would make people feel who actually come from those cultures, like their traditions are nothing more than amusing fashion trends for the majority of society. This doesn't mean that every person of color is going to be offended by such antics, but it does mean that we need to listen to those who are insulted, because they deserve to be heard.

The black women who are hired to twerk in music videos for Miley Cyrus and Taylor Swift are used as mere props to further these women's careers, rather than individuals whose blackness is being celebrated or appreciated in a real way. The same goes for the so-called geishas flitting around behind Katy Perry at the AMAs. They represent submissive Asian objects that white men have historically found to be sexually irresistible and thus taken advantage of. Countless women of color feel insulted and dehumanized when they see someone who looks like them stripped down to nothing more than fetishes or cute accessories.

In the meantime, black women are disproportionately subjected to police brutality and lose their family members to it. Up to 60 percent of all Asian women have experienced sexual violence from their romantic partners at least once, which is the highest rate out of any ethnic group. If we continue to allow cultural appropriation to appear on major media outlets, we'll only teach the upcoming generation that people of color don't deserve to be treated like human beings. This only paves the way for more disrupt in our country and more violence towards one another. And I can't think why anyone would want to live in a world like that.