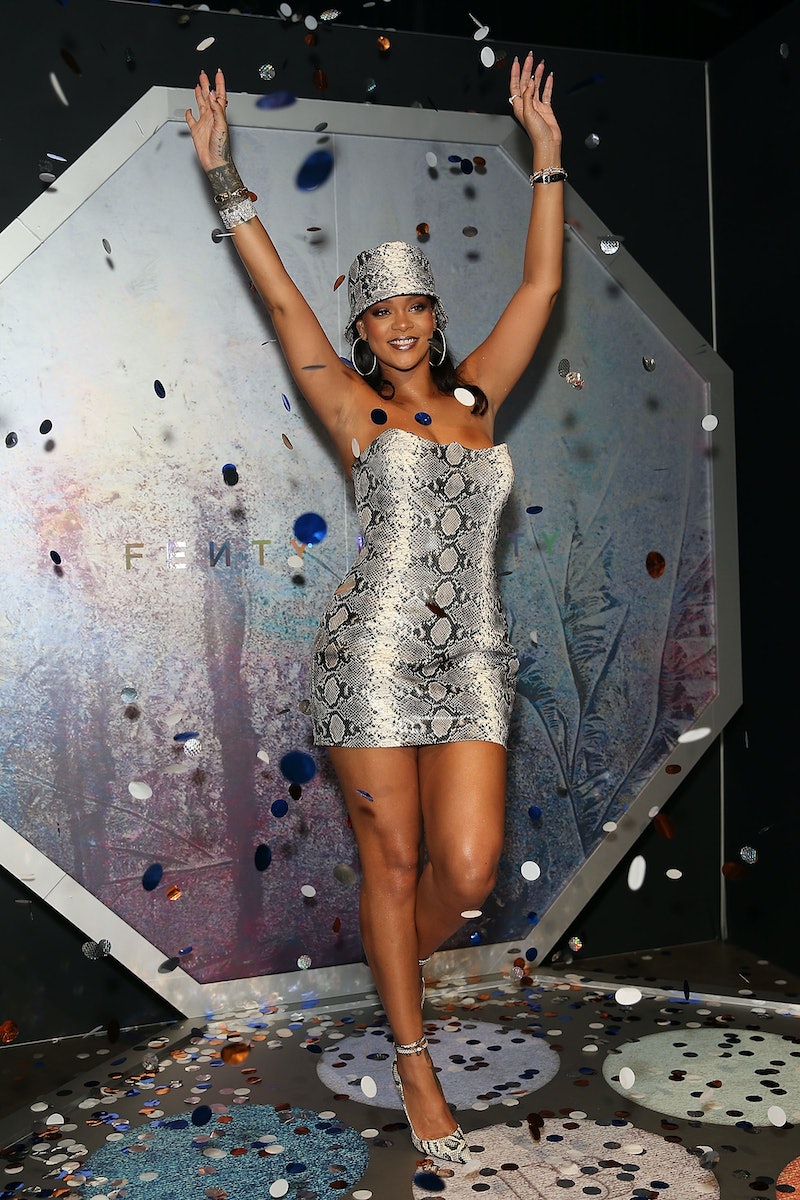 In recent years, Rihanna has been the business mogul to emulate and put on our vision boards. Her uber-successful cosmetics line Fenty Beauty proved that RiRi has the chops and popularity to expand her name into a full-blown empire, which she’s done with the launch of Fenty, her luxury brand with LVMH that made her the first Black woman in history to run a major luxury fashion house. But what about the music? Rihanna gave fans an update on her upcoming album, and while it may not be the news that the Navy wants to hear, at least it reassures fans that new music is on the way.

In a new cover story for Interview, Rihanna’s Ocean’s 8 costar Sarah Paulson chatted with the superstar about everything from Fenty to shyness, and because Paulson is a fangirl just like everyone else, she just had to know how her next album was coming along. As it turns out, Rihanna grueling work schedule is why it's not out just yet as most fans expected.

"It’s the reason why an album isn’t being spat out like it used to," RiRi explained to the actor. "I used to be in the studio, only the studio, for three months straight, and an album would come out. Now, it’s like a carousel. I do fashion one day, lingerie the next, beauty the next, then music the next. It’s like having a bunch of kids and you need to take care of them all."

The Navy is not alone in their disappointment — their leader is right alongside them. "It really does suck that it can’t just come out, because I’m working on a really fun one right now," she said. "I’m really happy with a lot of the material we have so far, but I am not going to put it out until it’s complete. It makes no sense to rush it, but I want it out. I’ve gotten to the point where I’m like, ‘Even if I don’t have the time to shoot videos, I’m going to put an album out.’"

When Paulson asked her if there was an estimated date that we could expect the next record, Rihanna wistfully said, “I wish I knew," but at least she's carving out time for it. "I have blocked off a solid period of time for the studio next month," she explained. Although it's unclear when exactly the two ladies chatted, they also discussed how RiRi would not be attending the Met Gala, meaning it was before the first Monday of May. For all we know, those studio sessions may have already happened.

In May 2019, Rihanna also spoke about new music to The New York Times, confirming that she was working on a reggae album and denying that she was collaborating with either Drake or Lady Gaga (though she's open to working with the latter). And while she hasn't decided on an album title yet, she did have one idea.

“So far it’s just been R9, thanks to the Navy. I’m about to call it that probably, ’cause they have haunted me with this ‘R9, R9, when is R9 coming out?’" she remarked. "How will I accept another name after that’s been burned into my skull?" Rih, fans don’t care what the album is called, as long as it’s released while we're still living on this Earth.

More like this
Twitter Is Freaking Out Over Rihanna’s 2023 Super Bowl Halftime Show Announcement
By Stephanie Topacio Long
The Spice Girls Just Dropped A Brand New Music Video
By Sam Ramsden
Everything To Know About Taylor Swift’s 10th Studio Album, 'Midnights'
By Grace Wehniainen and Jake Viswanath
Mariah Carey Is Releasing Her “Lost” '90s Grunge Album
By El Hunt
Get Even More From Bustle — Sign Up For The Newsletter