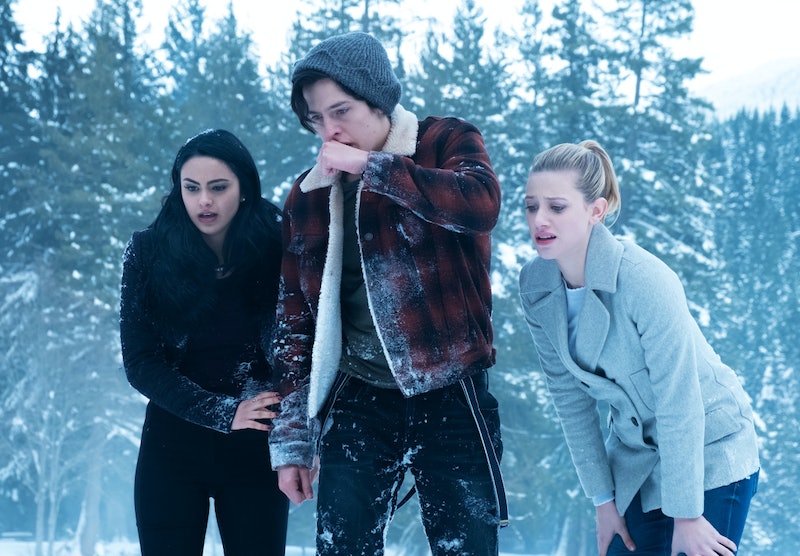 Following an engrossing, high-thrill run, Riverdale will cap off its first season when the finale airs on Thursday, May 11. Spoilers for Riverdale Season 1 ahead. In the penultimate episode, Jason Blossom's killer was shockingly unmasked as his father, Clifford, and in the aftermath of the Blossom patriarch's subsequent suicide, the town will be left scrambling to figure out why he did it. But while the central murder-mystery has finally come to a close, Riverdale Season 2 spoilers promise an even darker, drama-packed return.

Of course, there are still plenty of recent twists to sift through. How will Cheryl comes to terms with her father's death and the fact that he killed her beloved brother? What will happen to FP, who's still facing lengthy jail time? And will there be consequences from Jason and Polly's apparently incestuous relationship (and resulting children)?

But it's clear that Season 2 discussions are well underway. Thus far, any specifics have been expectedly vague — it is, after all, quite early — but the cast and crew have been surprisingly candid about the broader aspects of what the show's next batch of episodes may entail. From incoming cast members to a new direction, check out what's ahead for Riverdale.

In Season 1, Hiram Lodge was awaiting trial for his embezzlement scandal, and though he was never seen on-screen, his presence seemed to loom over the town. In Season 2, he'll finally make his long-awaited appearance. According to TV Line, Mark Consuelos has been cast in the role, and is set to join the show as a series regular. Expect a lot of family turmoil from the Lodges when he returns.

It Will Have A Genre Feel

In March, speculation began to swirl that Riverdale would eventually go the zombie route and take after Archie comics spin-off Afterlife With Archie, which isn't that far of a stretch since showrunner Roberto Aguirre-Sacasa wrote it. In an interview with Entertainment Weekly, he was hesitant to confirm or deny the theory, but said Season 2 would definitely have “a big genre element." Whether that means sci-fi or full-on supernatural remains to be seen.

It May Have More Horror

If Riverdale does decide to veer into zombie territory, it will take on a scarier tone. "There are a lot of zombie shows, so if we did go there, I think we’d more lean into the Lovecraftian horrors," Aguirre-Sacasa told EW in the same interview. "The Evil Dead zombies are very much about the Book of the Dead and the Necronomicon and demons possessing the bodies and stuff. That’s where I gravitate toward anyway. I’m more horror than sci-fi."

Whether or not this will sprout up in Season 2, Aguirre-Sacasa seems to have given the zombie idea a lot of thought, so it's a high possibility that it will happen at some point down on the line.

There Will Be A New Mystery

Though the Jason Blossom whodunnit is definitively over, Riverdale Season 2 won't have any shortage of mystery, even if we won't know what it is for quite some time.

"There's never not going to be a massive mystery to be solved," Marisol Nichols, who plays Hermione Lodge, told Collider. "So you're going to see that. It'll be set up for sure by the end of the season, next episode. It's not over yet."

Archie and co. have spent Season 1 sifting through plenty of high school drama, but their parents all grew up in Riverdale, too, and they come with their own set of baggage. In an interview with TV Line, Mädchen Amick, who plays Alice Cooper, revealed Season 2 will dig into more of that history. "[Aguirre-Sacasa] definitely has some really fun flashbacks planned for next season," she said.

There's A New Villain & It's Someone Fans Will Know

During an interview with Bleeding Cool, Aguirre-Sacasa said the Season 1 finale will set up a new "big bad." "It’s someone who has long, deep ties to the Archie universe," he told the outlet. "It’s definitely a character people know. I think it’s a character that people won’t see coming."

One of the leading contenders? Sabrina the Teenage Witch, a character Aguirre-Sacasa has teased frequently in the past. As he told The Wrap:

Other possibilities are Betty (Lili Reinhart) and Cheryl (Madelaine Petsch). In an interview with Teen Vogue, Reinhart floated the return of Betty's dark side, which fans got a glimpse of when she impersonated her sister, Polly, in Episode 3. Elsewhere, Aguirre-Sacasa teased a grim send-off for Cheryl while speaking to The Hollywood Reporter. "She’s at her worst place emotionally that she’s ever been," he said. "She’s already been in a fraught, frayed place. It gets even worse now."

It will likely be some time before Riverdale is anywhere near an official return. In the meantime, fans will just have to do their best guessing about what's to come.