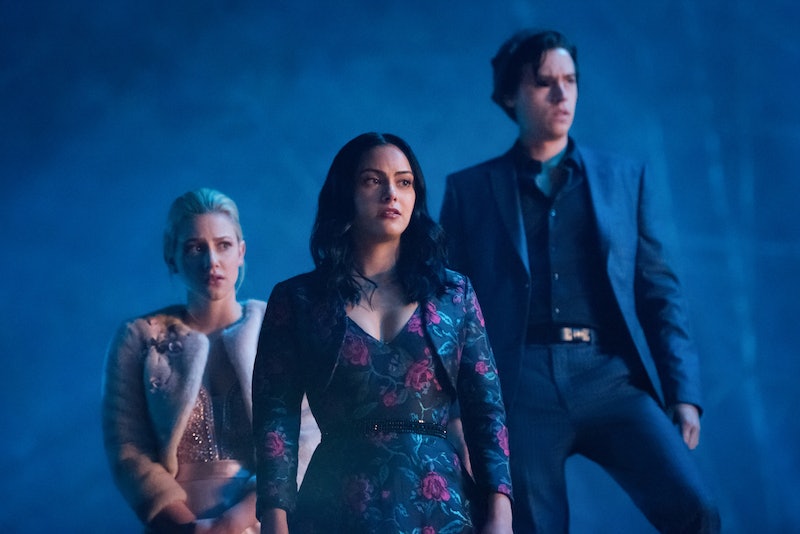 Between Jason Blossom's killer, the Black Hood, Hiram Lodge, and the Gargoyle King, Riverdale has always thrived on giving viewers a new Big Bad to unmask and a mystery to solve. Though this season's premiere rightfully focused on honoring Luke Perry's memory and mourning his character's death, showrunner Roberto Aguirre-Sacasa revealed in an interview at New York Comic Con that Riverdale Season 4 will also feature at least one new villain. Yes, it appears that though the Farm will continue to be a menacing presence, Edgar Evernever (Chad Michael Murray) and his creepy, monochromatic followers will have some competition terrorizing Riverdale. "There are definitely new villains this season," Aguirre-Sacasa said. "You’ll meet [one] in Episode 2."

Season 3 revolved around the unmasking of the occult-like Gargoyle King, who was revealed to be Chic in the finale. However, since Riverdale loves overcomplicating things, the Farm also proved to be a huge and ominous plot point. Led by the aforementioned Evernever, this cult soon spread its bleached-white influence all over town, recruiting members by hypnotizing them, stealing their organs, and claiming they'd been enlightened.

Because the Season 4 premiere functioned almost as a standalone episode paying tribute both to Luke Perry and his Riverdale character, Aguirre-Sacasa told Bustle that Episode 2 is essentially the real season premiere. "The big story is between Betty and Kevin," the showrunner revealed. Back in Season 3, Kevin was last seen at the Farm, crying and surrounded by white robes. When asked where everyone went, he responded, "The worthy ascended, of course!" The Keller boy, meanwhile, was tasked with staying behind.

Just one episode prior, Betty had tried warning him and Fangs about what Edgar was really up to, but Kevin replied, "He's taking out the parts of us that are diseased!" When she tried to fight them, he grabbed her by the ankles, dragged her away from the door, and had her tied up. Aguirre-Sacasa teased that there are "definitely consequences" to these actions.

Betty's mother, Alice (Mädchen Amick), became deeply entrenched in the cult, but audiences later learned that she was really working undercover. But during the Season 3 finale, Alice and Polly went MIA when they ascended, along with Edgar and the rest of his disciples.

"The first few episodes [of Season 4], it's a little mysterious where [Polly and Alice] are," Amick said at NYCC. "Episode 3, Alice gets a really big redemption against the Farm, so that's going to be a really fun episode. And then after that, she has to fold back into the town."

The Twin Peaks actor says that Alice was initially won over by Edgar. "Roberto [Aguirre-Sacasa] and I talked about how much she knew and when," Amick explained. "So I think she went into the Farm and was kind of lured in because she needed to heal. And she was definitely susceptible to that cult kind of mindset. But then at some point, she was like, 'Wow, wow, wait a minute. Something's going on.' And then I think that's when Charles probably contacted her, and then it became a whole mole situation."

It will be nice to see Alice back to her old reporting tricks and not constantly wearing white and a serene expression. "She definitely gets her chutzpah back, for sure," the actor added.

But while the Farm will likely continue to be a thorn in Riverdale's side, Aguirre-Sacasa was tight-lipped on who the show's new villain is. Fortunately, audiences only have to wait until Episode 2 to find out.

More like this
Everything To Know About 'Only Murders In The Building' Season 3
By Gretchen Smail and Kadin Burnett
At 28, Rosie Perez Risked Her Career To Stop Playing Stereotypes
By Gabrielle Bondi
At 28, Debra Jo Rupp Was Living A Much Different '70s Show
By Grace Wehniainen
Zach Reveals The Chaotic 30 Minutes That Were Cut From ‘The Bachelor’ Premiere
By Grace Wehniainen
Get Even More From Bustle — Sign Up For The Newsletter
From hair trends to relationship advice, our daily newsletter has everything you need to sound like a person who’s on TikTok, even if you aren’t.