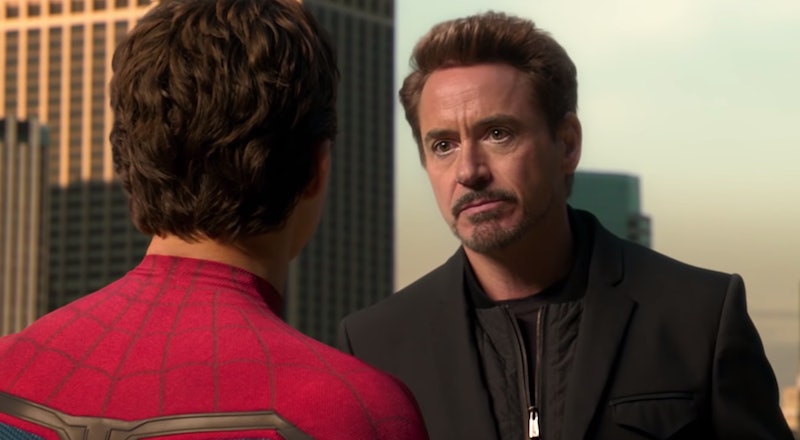 With Endgame on the horizon, there's been a lot of talk about the finality of the newest Avengers film and what it could mean for our favorite superheroes, namely Iron Man and Captain America. But, instead of looking for clues about their fates in every promo or interview, it's worth taking a look at the actors themselves — most importantly, their contracts. Unfortunately it seems that Robert Downey Jr.'s Marvel contract might be up, making Endgame the end of his reign as Tony Stark.

According to Variety, Downey was actually only contracted to go until the third Avengers film, and his original contract reportedly didn't include having as big of a role as he did in Captain America: Civil War. It was either going to be a cameo, or nothing. But the heavy Tony Stark/Steve Rogers tension in the Civil War storyline required the negotiation of a new contract to include the addition of Civil War, as well as a third Avengers film, which ended up being split into two parts — Infinity War and Endgame. The Variety report did not mention any films beyond that, though it's worth noting that, since the third Avengers film was split in two, Downey's contract could have been renegotiated again, and who knows how many more movies he signed up for?

That said, it wouldn't be surprising if Downey's contract with Marvel ended with Endgame. After all, he was the very first to jumpstart the MCU with 2008's Iron Man — it's now 11 years and nine movies later. That said, the actor hasn't explicitly confirmed that he doesn't have any more Marvel appearances in his contract. But, his co-star Chris Evans may have spilled the beans.

Last April, Evans spoke about the end of his Marvel contract while promoting his Broadway play Lobby Hero on Good Morning America. "A lot of our contracts are through. Myself, Downey Jr., [Chris] Hemsworth, we all started roughly at the same time, and I think we all through Avengers 4 kind of wrap it up," Evans said. "I don't know what's next — but by 2019, that's it."

And Downey knows he won't be playing Iron Man forever, nor does he want to. “Everyone says to me it’s like a glove that fits so well. I have to start over every time but I am starting over with a pretty solid base," he said in a 2017 interview, reported by News Corp Australia. "I just never want to blow it for the last six or seven (MCU movies) I have done by dropping the ball because I decided to go do it one more time. I just want to hang up my jersey before it’s embarrassing.”

The actor has already said that there won't be another Iron Man movie, and, to fans' dismay, he doesn't seem to be in Spider-Man: Far From Home. In fact, Tony Stark's absence from the Far From Home trailer has fans worried that Iron Man won't survive the events of Avengers: Endgame. And trailers for Endgame also seem to be hinting at Iron Man's death, as well as those of Steve Rogers and Thor (characters played by the three actors Evans mentioned to GMA).

All signs point to Downey's Marvel contract might running out with Endgame. But, then again, there's nothing Marvel does better than surprises, so who knows? Until the actor says he's done playing Iron Man, there's always hope.