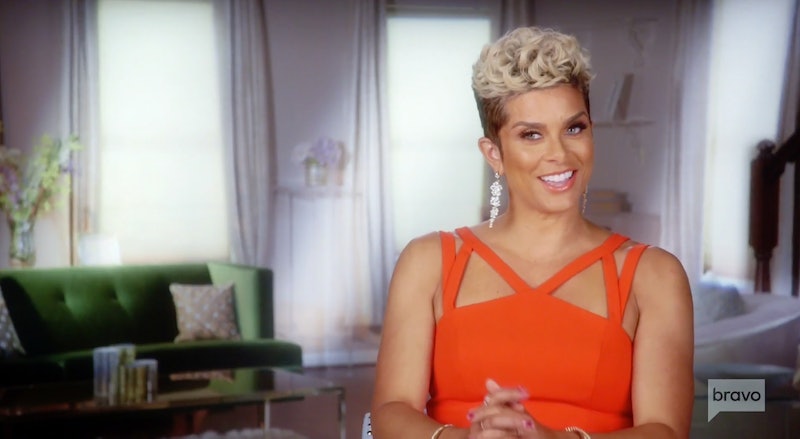 Most of the time a Real Housewives storyline has a shelf life of one season. However, Robyn Dixon's relationship with her ex-husband Juan Dixon has been a consistently fascinating plot point for four whole seasons on Real Housewives of Potomac. They are divorced, but they have lived under one roof with their two sons since Season 1 of the show. They are not officially "together," but there is clearly a strong connection between them, and it is not just a bond as parents. Viewers at home can feel the chemistry between the two of through their TV screens. So, what is going on with them?

Let's be honest, their actual relationship status is just as unclear as ever. They are really doing their best to keep things private. Juan doesn't even have a public Instagram account. Or maybe they are just trying to prevent Season 4 spoilers from leaking. Either way, there is no definitive answer, but at least there are some clues.

During the Season 4 premiere episode, Juan took Robyn to get a massage, a date that he planned all on his own. In her May 7 Bravo blog post, Robyn discussed Juan's initiative to plan that massage date.

Robyn shared, "It shows that not only does he appreciate all that I do for our family but he wants to spend more quality time together outside of the house. And the intimacy of the date means not just quality time, but romantic time! I can get used to this!" And maybe she has. That episode was filmed months ago, but it sounds like Robyn and Juan are in a good place these days.

In that blog post, Robyn wrote, "It definitely was not easy for Juan and I to get to a great place in our relationship. It took time and patience and understanding that it would not be an overnight process." However, she did not get into the specifics of that "great place." Are they a couple again? Will we ever know?

Robyn shared, "it took a concerted effort to put each other first and an acknowledgment that we both wanted something more from our relationship."

And these two have been through a lot together. Robyn reflected,

"Spending the past few years weathering our financial struggles and relationship stress while maintaining a strong bond for the sake of our children, really strengthened our relationship and helped us realize that life is too short to not be happy and enjoy those around you"

So did they continue to strengthen their relationship? Of course, they're not leaking spoilers, but it the prognosis is good. Even the other Potomac Housewives agree.

In a May 9 interview with People, Monique Samuels shared, It just seems like it's a revolving circle. I feel like it's the same thing happening over and over again. I'm like they either need to just break up or they need to get married. Pick one."

And Monique also shared her own opinion on their dynamic. Monique admitted, "I would love to see them walk down the aisle and make it official again. Stop playing and just do it."

During a May 5 appearance on Watch What Happens Live With Andy Cohen, Robyn's bestie Gizelle Bryant adamantly declared, "I want them married." Unfortunately for the fans, Robyn and Juan's relationship status is very unclear, but their future is promising and they have support from the Housewives. And the fans, of course.