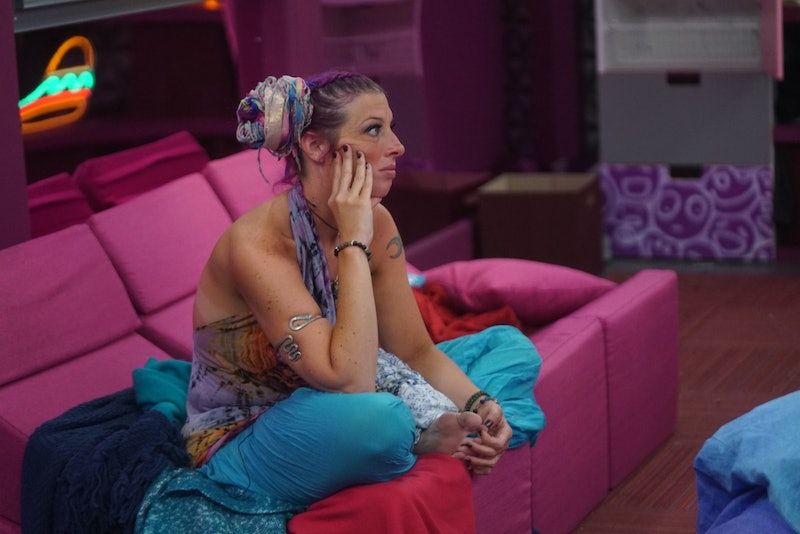 Big Brother is specifically designed to stress out its contestants, which can lead to some pretty monumental blunders. However, chances are no one will make a mistake larger than Rockstar, who accidentally helped Tyler during a PoV competition while she was on the block. The assist led to Tyler winning the PoV, and Rockstar's actions after he won suggest that the accident may not have been so accidental. Did Rockstar really make a massive mistake, or was letting Tyler cheat off of her simply a plan that went horribly wrong?

The veto competition was this season's "OTEV", a recurring game in which the houseguests answer questions about the season so far asked by a giant figure named OTEV — this season OTEV is a giant skunk with a cold — and then wade through a watery course to try and find an object — medicine for the aforementioned skunk — that lists the answer to the question on it. The last person to bring OTEV the correct answer is eliminated. When asked a question about the two people evicted pre-jury, Tyler grabbed a bottle that says "Rachel" and "Bayleigh." When Tyler noticed that Rockstar's bottle looked noticeably different, he asked about it and Rockstar told him the real answer: Rachel and Kaitlyn. Tyler went back down and got the right answers, allowing him to move onto the final round, where Rockstar made yet another crucial mistake.

After helping Tyler get into the final round, Rockstar pulled a miraculous upset by being the first to collect an answer for OTEV. She celebrated as Tyler, disappointed in himself, grabbed the answer and offered it to OTEV. However, it turns out that Rockstar had gotten the wrong answer and the favor was not returned. Following her loss, Rockstar went to Tyler and reminded him that her help is the only reason he won PoV. Her appeal wasn't enough to change his mind, however, and he pulled Angela off the block, leaving Rockstar nominated and likely to go home during the upcoming eviction.

While Rockstar actively gave Tyler the answer during the competition, it appears that her assist was an absent-minded mistake instead of a plan that was built to be so absurd that it just might work. Rockstar even admitted in a diary room session that the plan had been a mistake, and it seems her plea to Tyler following the competition was simply a last-ditch effort to try and keep her off the block. If the winner had been anyone other than Tyler, Rockstar may have had a chance at having the veto used on her, but Tyler has proved over the course of the game that he's more interested in winning than making his fellow houseguests happy.

It looks all but certain that Rockstar will be going home this week — but that means that of the two people in the jury so far, Tyler was instrumental it getting both of them evicted. Tyler may be good at getting people sent home, but when the time comes for the jury to decide a winner, Rockstar could get her revenge by voting for whoever is up against Tyler — assuming he makes it to the final two.