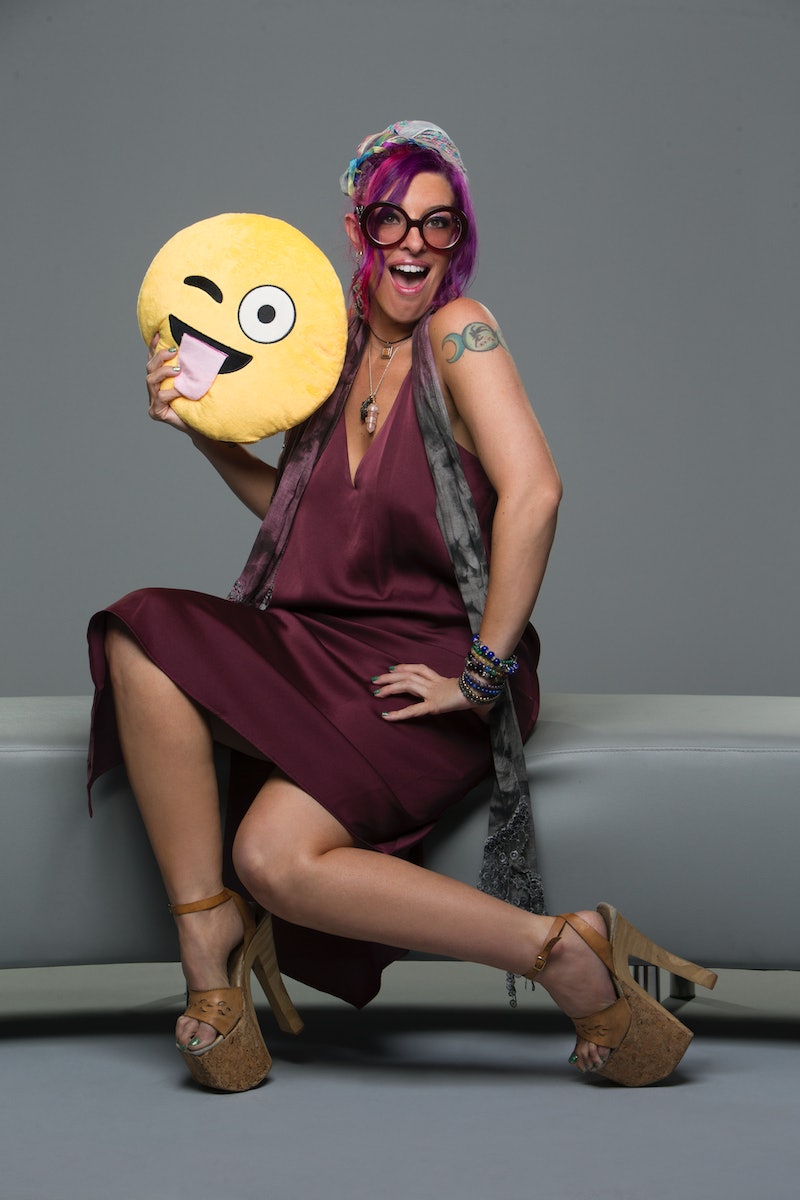 With a name like Angie "Rockstar" Lantry, her life is bound to be anything but boring. The Big Brother 20 houseguest is hard to miss, with her hot pink hair, flowy clothes, and oversized glasses. Her whole personality is intriguing, but what is Big Brother contestant Rockstar's job out there in the real world?

While her outfits seem suited for a gig at a quirky clothing boutique, Rockstar is actually a stay-at-home mom. But don't let her parental status fool you into thinking she's boring. She describes herself as "eclectic, entertaining, and magical," in her bio on the CBS website, and her screen time so far on Big Brother has proven that to be true.

"I always dress very colorful," she said in her Episode 1 intro. "I believe in peace through partying." The 34-year-old is also a pagan witch, which she states up-front in the show. So she's far from your stereotypically meek "soccer mom."

In fact, per the same bio, Rockstar said she wanted to bring "a statue of Ganesh, Elephant God remover of obstacles," "some sage to burn to remove the bad juju from all the shade thrown around the house," and "a variety of crystals to use for different power purposes" to the BB house.

What's more, she has her own blog, called Witchy Mama — though, right now, it only features three posts. Rockstar has written honestly about mothering, including co-parenting with her ex-husband. "A child…children… That is a lifetime commitment. (excluding those that would harm your kids)," she wrote in one post. "You NEED to be friends with this person…at least acquaintances. My Ex-husband and I talk often about school, behavior, and feelings, we even support each other in our adult lives."

In another post, Rockstar discussed getting pregnant with her third child, although she had an IUD at the time. "This baby has bonded us as a family more than we ever could have imagined," she wrote. "The best Christmas gift we never knew we wanted. Sometimes you can have all the plans and precautions in the world, and the universe laughs at those plans. Our family, is laughing with it."

Rockstar also mentions in her IUD blog post that she delivered all three of her children naturally. "I handle pregnancy extremely well, natural births no epidural," she said. Now that's a dedicated mother!

So it's clear that the boho mom loves her brood, which is comprised of two daughters from her first marriage, her boyfriend's son, and their new baby, according to her IUD blog post. They do all kinds of things together; once, she wrote about what it's like taking her children to festivals. She was careful to list the ground rules she establishes before they hit the campground. She wrote:

"Let’s be real, some festivals just are not right for kids. Open drug use, alcohol, sex…hey it happens, that is why I NEVER take the kids to ANY festival I have not first attended without them. I tend to look for spiritual festivals, yoga festivals, music events with FAMILY FRIENDLY in the description.... In a perfect world everyone could be trusted, but in a perfect world a lot of things would be different…ONE RULE THAT NEVER BENDS…The kids are NEVER allowed in anyone else’s tent without one of us being there as well."

So although this mom seems determined to win this competition, that also means being away from her kids for a long time. "It is going to be terribly hard to be away from them," Rockstar said in Episode 1. "They're amazing and hilarious, and they keep me in check."

So time will tell if the distance proves to be too much for Rockstar, or if she'll end up winning the competition for her family.